Is it time for Ireland to stop punishing tragedy?

Where is Ireland's compassion in a country, which has a long and shameful history when it comes to how it treats its women? 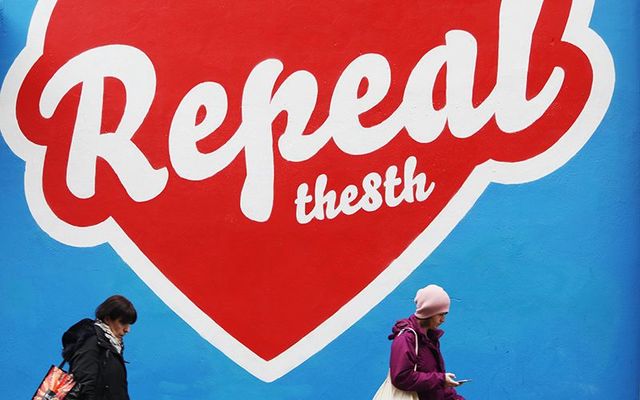 Maser's heart-shaped mural which has been removed from Temple Bar, Dublin, twice. Where is Ireland's love? RollingNews

Where is Ireland's compassion in a country, which has a long and shameful history when it comes to how it treats its women?

On the daytime radio show in which the host gets paid almost €500,000 per year to hear the concerns of the ‘plain people’ of Ireland, I heard a middle-aged man proclaim his total opposition to the repeal of the Eighth Amendment this week.

If his daughter was raped, he told the host, he sincerely hoped she would choose to keep the child rather than go through with an abortion.

A few weeks earlier, in a vast hall, I heard a woman tell an audience of about 400 people that the act of giving birth “heals the effect of rape”.

She called on the people at the Save the Eighth campaign launch in the West of Ireland to stop rape from happening rather than kill an unborn child.

She didn’t explain how that could be done.

At the same event, a woman told me that the proposed legislation for unrestricted abortion would bring a culture of ‘social’ abortion to Ireland.

She made it sound as though some women decided to have abortions in the same way as they decide what make-up to wear or what club to go to on a Saturday night.

This deeply personal issue is not something that is discussed much, if ever, among my circle of friends. But I am pretty sure that no woman I know has ever opted to have a ‘social abortion’, given the trauma, the heartbreak, the soul-searching, the sense of loss, and the secrecy involved.

There is the fear of confiding in an Irish doctor, given the very real threat of facing 14 years’ imprisonment, or of taking pills in secret, without any guidance or medical support because of the stigma – in fact, the criminalization – involved.

There is no doubt that people I have spoken to in recent months on the ‘No’ side have sincerely held views, and that they believe right is on their side.

But I live in the city where Savita Halappanavar lost her life at just 31 years of age. The young woman in distress, who was found to be miscarrying, died of blood poisoning after doctors declined to terminate her 17-week long pregnancy.

Savita Halappanvar lost her life at just 31 years of age.

“This is a Catholic country,” she was told at University Hospital Galway, a comment which made headlines all across the globe and shamed huge swathes of the Irish population.

Regardless of whether or not Savita’s life could have been saved, she was shown an appalling lack of compassion in a country which has a long and shameful history when it comes to how it treats its women.

Every October, Savita is remembered at a candlelight vigil in the heart of my city. The overwhelming feelings are of sadness and shame, sadness that a beautiful young woman lost her life in Galway and shame that she was treated in such a way.

The candlelight vigil takes place in Eyre Square, just five minutes away from the Magdalene Laundry where women were locked up for decades. There is such raw emotion, sadness, and pain when a small group of people gather to honor the women of the laundry each February.

The speeches at Bohermore remind us of how Irish women have been discriminated against, shamed, and mistreated for decades.

I also live in the same county as the Tuam Mother and Baby Home, another place which made headlines all over the world in recent years.

Children playing at the Tuam Mother and Baby Home - the remains of 796 babies were discovered in an unmarked mass grave.

It could be argued that the way in which the bodies of 796 dead bodies were discarded around a septic tank has nothing to do with Ireland’s current abortion debate.

But at the moment I am reading Alison O’Reilly’s harrowing new book, ‘My Name is Bridget’, which looks at how a young woman called Bridget Dolan was incarcerated against her will for the terrible ‘crime’ of expecting a baby outside marriage.

As Alison puts it, she was “following in the footsteps of more than a century’s worth of lost souls” when her family sent her in such shame to the Tuam home.

In those days, unmarried mothers could be named and shamed by priests from the altars of Catholic Churches throughout Ireland.

Their families were quick to judge and to bring them to the grim institutions where they were shown no love as they struggled to survive.

“The mothers-to-be were generally sent into the Home either by their doctor or parish priest or their family, normally arriving at the forbidding front door around a month before they gave birth. When their time came, they were offered no pain relief during labor, another facet of their punishment,” wrote Alison.

Nothing to do with abortion, you might say; but a grim reminder of our nation’s shame in terms of how it treated its women the not-so-distant past.

A memorial to the 796 babies found in a mass grave at Tuam.

For the children of these women, it was impossible to leave this stigma and shame behind. Many of them felt stigmatized for life, unable even to hold their heads high if they went to the village pub for a drink.

“You were just a bastard in their eyes . . . We were nothing but a kind of scum, you weren’t normal because you didn’t belong to a wedded family. It is totally crazy,” said one survivor last year.

This afternoon I undertook a walking tour of Galway with a group of female foreign language students. The issue of the referendum came up when they asked about the posters on lamp-posts and all of them were shocked when they heard that a woman could face 14 years in prison for having an abortion in Ireland.

Two of them had seen social media images of a ‘pro-life’ street procession in Limerick City at the weekend, in which young girls dressed in their First Communion dresses marched behind a car which was blaring out The Rosary from loudspeakers.

They found those images “totally crazy”.

A pro-life / save the 8th poster in Dublin.

A few weeks ago, I met a brave woman called Arlette who is a member of a group called Terminations for Medical Reasons (TFMR).

Arlette is not the kind of woman to get up on a soapbox, but her life was changed utterly when she was diagnosed with a case of fatal fetal abnormality six years ago.

After being told that her baby was going to die, she was then told that nothing could be done for her in Ireland. Her only options were to travel to another country or to go full-term.

She spoke of the agony she went through, the sadness and loneliness of her journey to Liverpool, and how she traveled home by boat because she could not face the ‘plane.

Then she found out there were hundreds of other women like her, women who were forced to travel to the UK or to carry a baby which had no chance of life full-term.

And her pain and sorry turned to anger.

Her colleague, Tracey, has spoken of the devastation of being surrounded by revellers enjoying a weekend away on her short flight to Liverpool on St Patrick’s weekend.

She was 22 weeks pregnant when she found out that little Grace was terminally ill, with a condition which would ensure she would die of respiratory failure upon birth.

“I couldn’t bare this happening to my baby,” she says.

“I spent four weeks nodding along to people’s excited questions. I was slowly losing my mind. I had to go somewhere where they understood what me and my baby were going through.”

The slogan of TFMR is to “stop punishing tragedy”.

Women in the terrible satiation faced by Arlette and Tracey should not have to deal with the shame and trauma of having to leave their friends, family, and familiar faces behind after being given such devastating news.

Irish woman's abortion left her 'feeling like a criminal'

At 12 weeks pregnant Amy was told her baby would not survive. But she still had to leave the country for a termination.

Abortion already is a reality in Ireland, but women facing such a tough, life-changing decision are being forced to travel to the UK or Europe for terminations or take illegal pills in secret at home.

Those who have been raped, sexually abused, or are carrying fetuses with no chance of life deserve so much more than being criminalized, with the threat of 14 years in prison.

It’s time to put an end to Ireland’s culture of shaming women and brushing issues under the carpet, whether by locking up young women in Mother and Baby Homes or condemning them to secret and lonely trips to England.

We can put that shame behind us – and stop punishing tragedy – by voting ‘Yes’ on May 25.

* Ciaran Tierney is a journalist, blogger, and digital storyteller, based in Galway, Ireland. His website is ciarantierney.com.