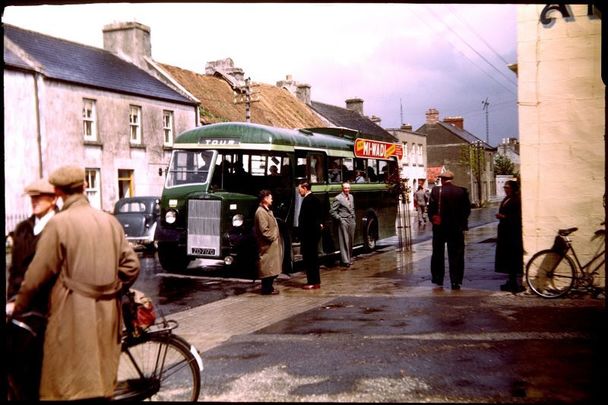 A savvy traveler in 1953 to Ireland from rural Minnesota packs a portable 35mm camera, Kodachrome slide film, and other essentials for world travel. That’s exactly what my father did before heading to the island of Ireland.

My late father Martin, nicknamed Marty to avoid confusion with his father, Martin J. Walsh Sr., made our family’s first known return trip home to Ireland in 1953, recording his adventures with Kodachrome and his Clarus 35mm camera.

Our family was part of a mainly Irish immigrant settlement in De Graff, located in rural Swift County, Minnesota, arriving in the late 1800s. This was the first in a series of ten villages in five counties in western Minnesota established by the late Saint Paul Archbishop John Ireland, helping Irish Catholic families like mine escape from urban slums, and resettling in farmlands in rural Minnesota. 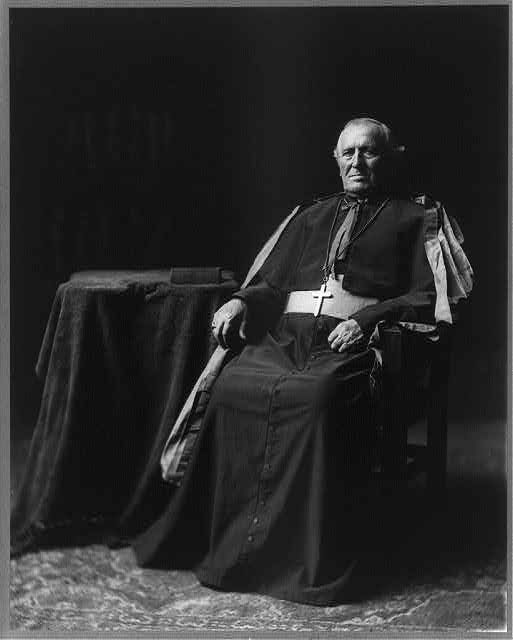 Archbishop John Ireland, circa 1908. (US Library of Congress)

When I was a child, my father, telling stories of our family’s history and connection to the island of Ireland, would say, “We are Archbishop John Ireland’s people.” It just happened to be the Archbishop’s last name was the same as the country my people left behind in the mid-1800s.

My family is one of the four thousand Catholic families Archbishop Ireland help resettle in west central and southwest Minnesota during the years of 1875-1885. Archbishop Ireland’s goals were to alleviate the perceived problems of nativist prejudice (anti-immigrant), poverty, and loss of religion faced by urban Catholics (particularly Irish) on the east coast and poor Catholics still in Ireland by relocating them to low cost farmland in western Minnesota.

Today, I live just three miles from De Graff, in Murdock, Minnesota, in the same house my father was born in 1924. You can learn more about the De Graff and the historic Church of St. Bridget at the United States Department of the Interior, National Park Service website. The Library of Congress in Washington, DC has a detailed presentation on Irish-Catholic Immigration to America to explore more details on immigration.

My father did not have a career in photography, but his incredible 1953 Kodachrome images survive today, giving a glimpse of his expedition to Ireland.

His love of travel and photography were passed on to my brother Paul M. Walsh and also me, both working as photojournalists, and careers related to photography and media. Today I know more about my father and his travel to Ireland simply because my father recorded what he encountered with his 35mm camera and Kodachrome.

You can view more of my father Martin J. Walsh Jr.'s photos of Ireland here on Flickr.

I imagine my father as a very proud young man with the incredible opportunity to see the homeland of his family in Ireland in 1953. I know his suit pockets were stuffed with important travel items as he wrote details on the border of one of his 1953 Kodachrome slides from Ireland.

My father’s US Passport, issued February 6, 1953, lists no wife or children. The description of the passport bearer, my father, is 5 feet 11 inches, brown hair, hazel eyes, with no distinguishing marks or features. His location of birth is listed Murdock, Minnesota, with an occupation of telegraph operator. 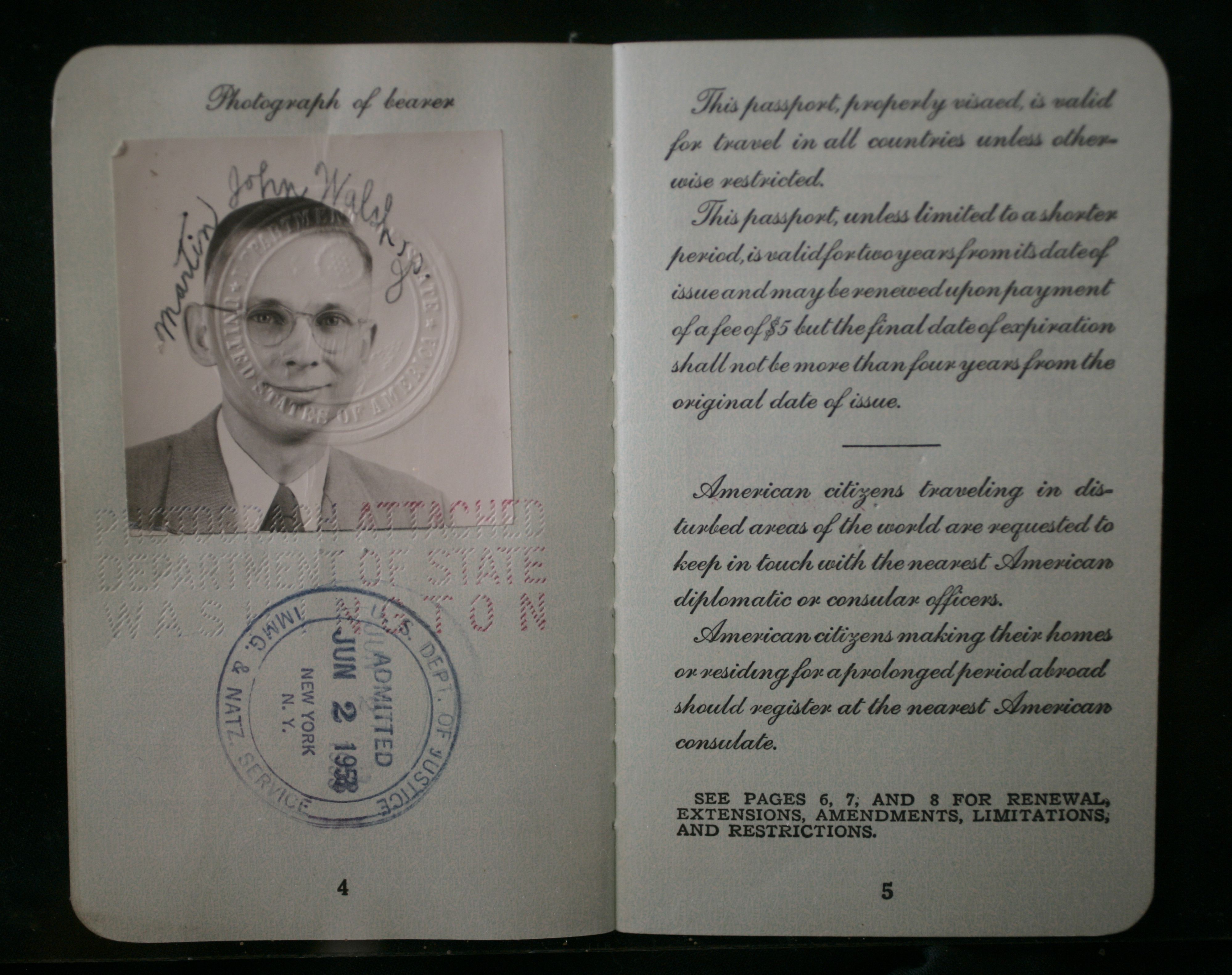 I’d add, but not listed on my father’s passport, is Black Irish. I still remember my father referring to himself as Black Irish when I was a child, yet he was clearly caucasian, including freckles, indicating he was a carrier of the rare red hair genes.

The term Black Irish is a reference used of people of Irish ancestry, often used outside of Ireland, with black hair and dark eyes. The theory suggests these people are of Spanish lineage, descendants of shipwrecked Spanish traders. Read more about this interesting theory. 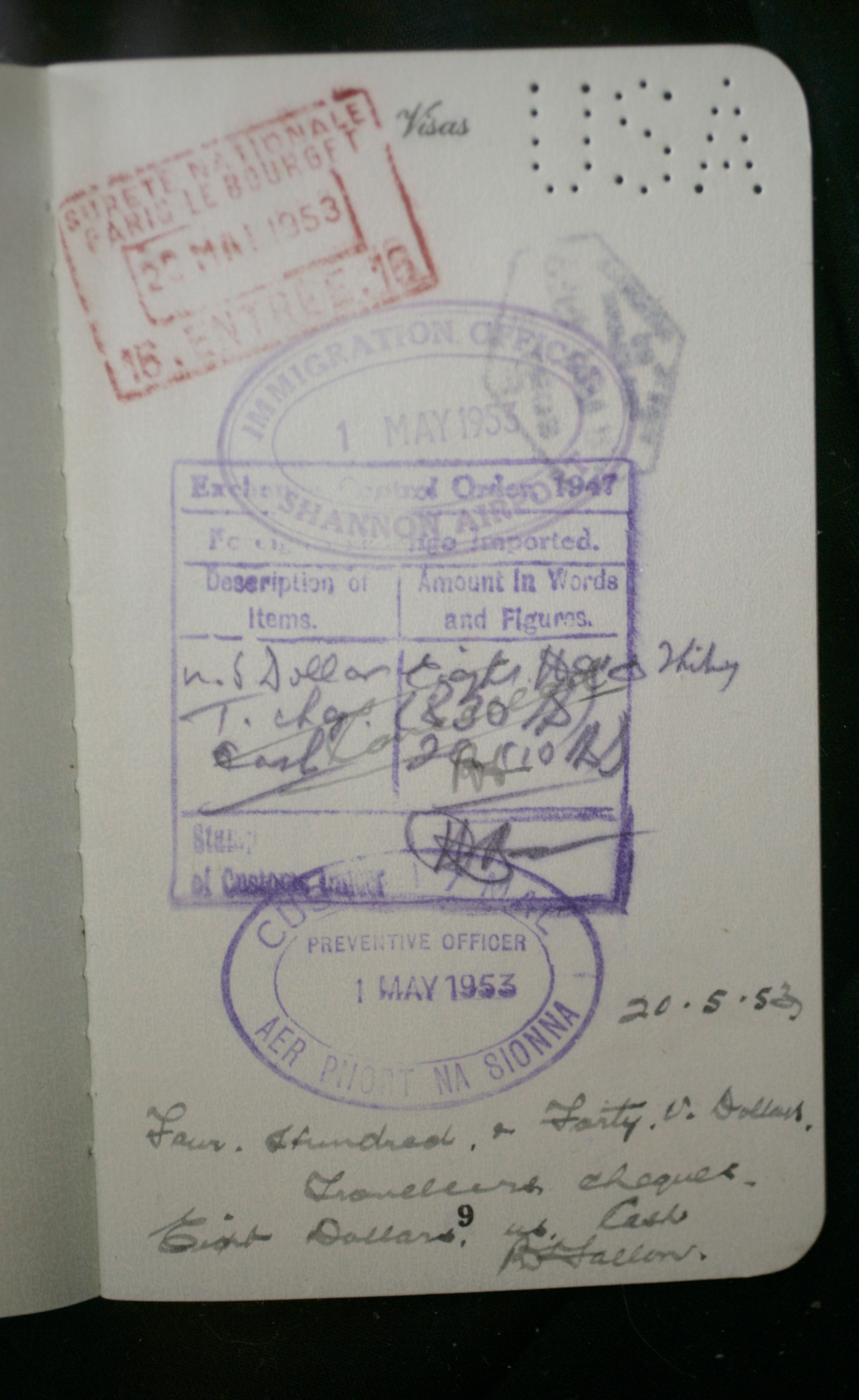 My father wasn’t yet married in 1953, likely lived at home with his parents to save money for a trip of a lifetime traveling to Ireland, England, and France, including a stopover in Canada. Travel to Europe opened up after World War II, and my father left home by train from Willmar, Minnesota, according to my grandfather’s diary, before eventually landing by plane in Belfast, Northern Ireland. 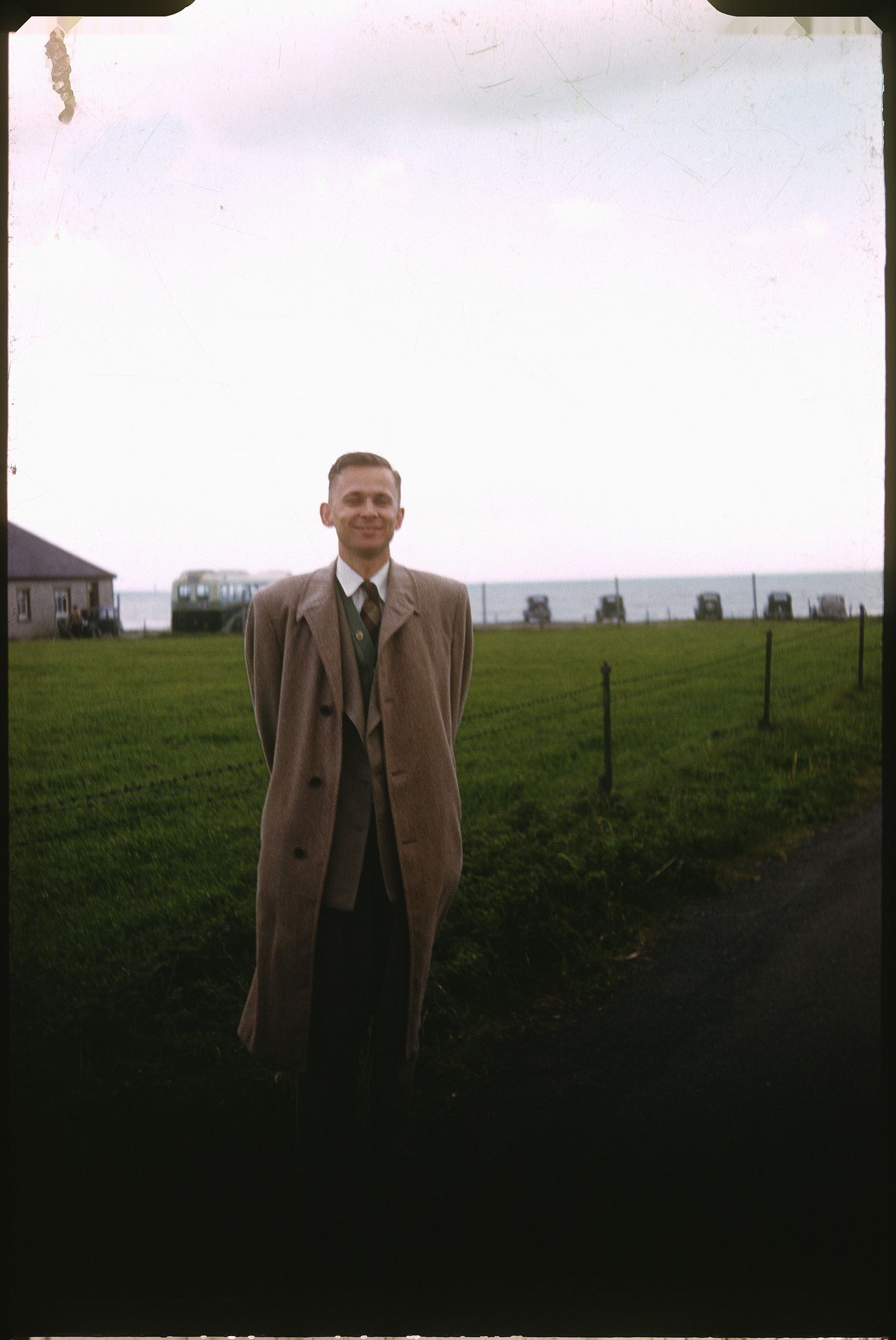 American Express offices helped keep lines of communication open to his family back home in Minnesota, receiving letters from his mother, and the latest news of Murdock, including details at the local Catholic parish, according to his letters sent home. 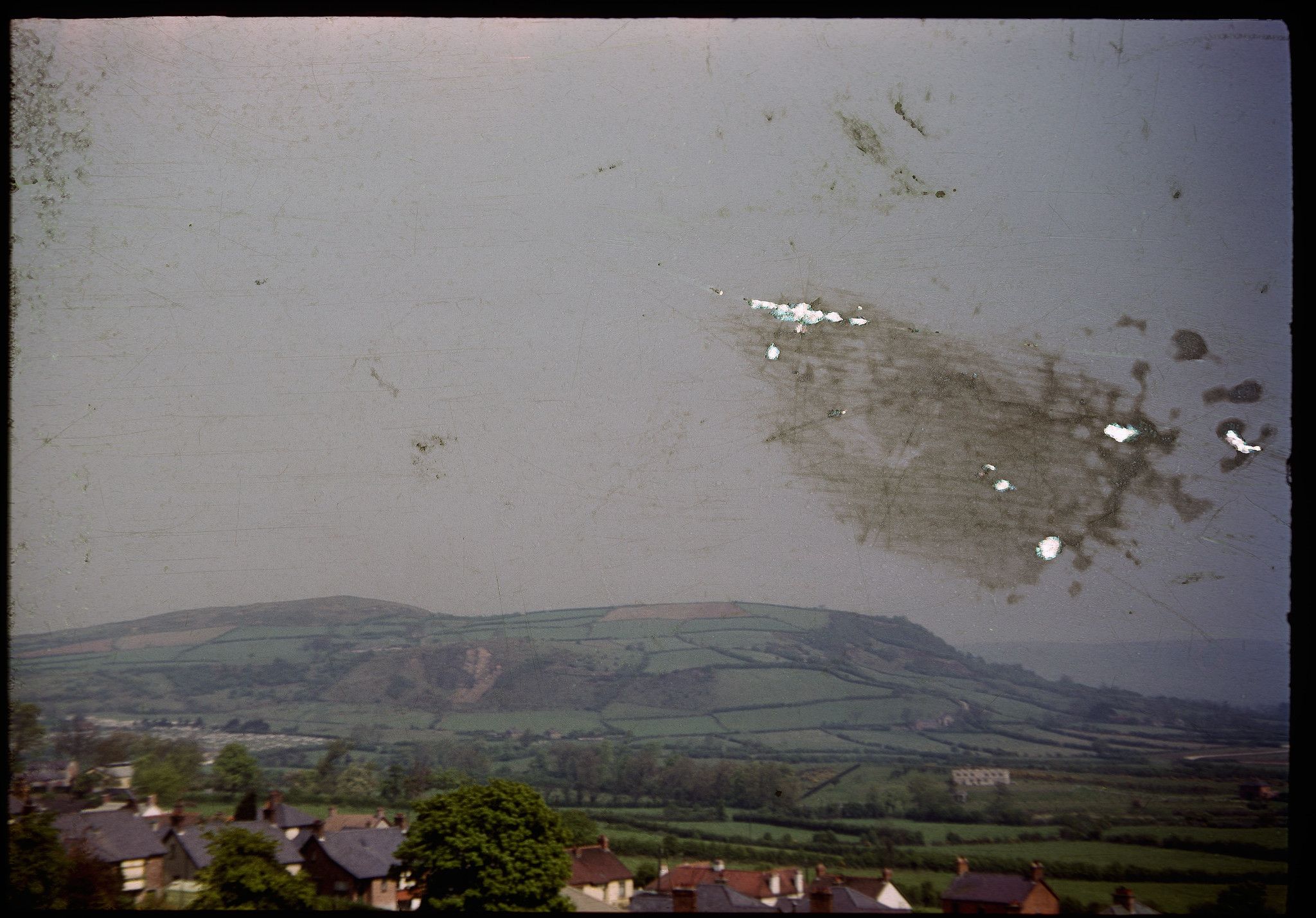 His travels to Ireland included a refueling stop by airplane in Gander, Newfoundland, Canada, a stopover necessary in early postwar transatlantic air travel before arriving in Belfast, Northern Ireland. I think my dad would find it interesting the airport in Gander, due to its strategic location and runway capacity, became a designated alternate landing site for NASA's Space Shuttle program, according to gandercanada.com. My father was flying to Ireland, what might have seemed like space travel coming from rural Minnesota, surrounded by prairie and open farmlands.

My father’s images of his Irish adventures included a trip to Killarney in County Kerry, one of the locations of origin for my family in Ireland. He didn’t have a chance to locate the farm I discovered in 2018 that our family is associated with in Townland Dromkerry in County Kerry. 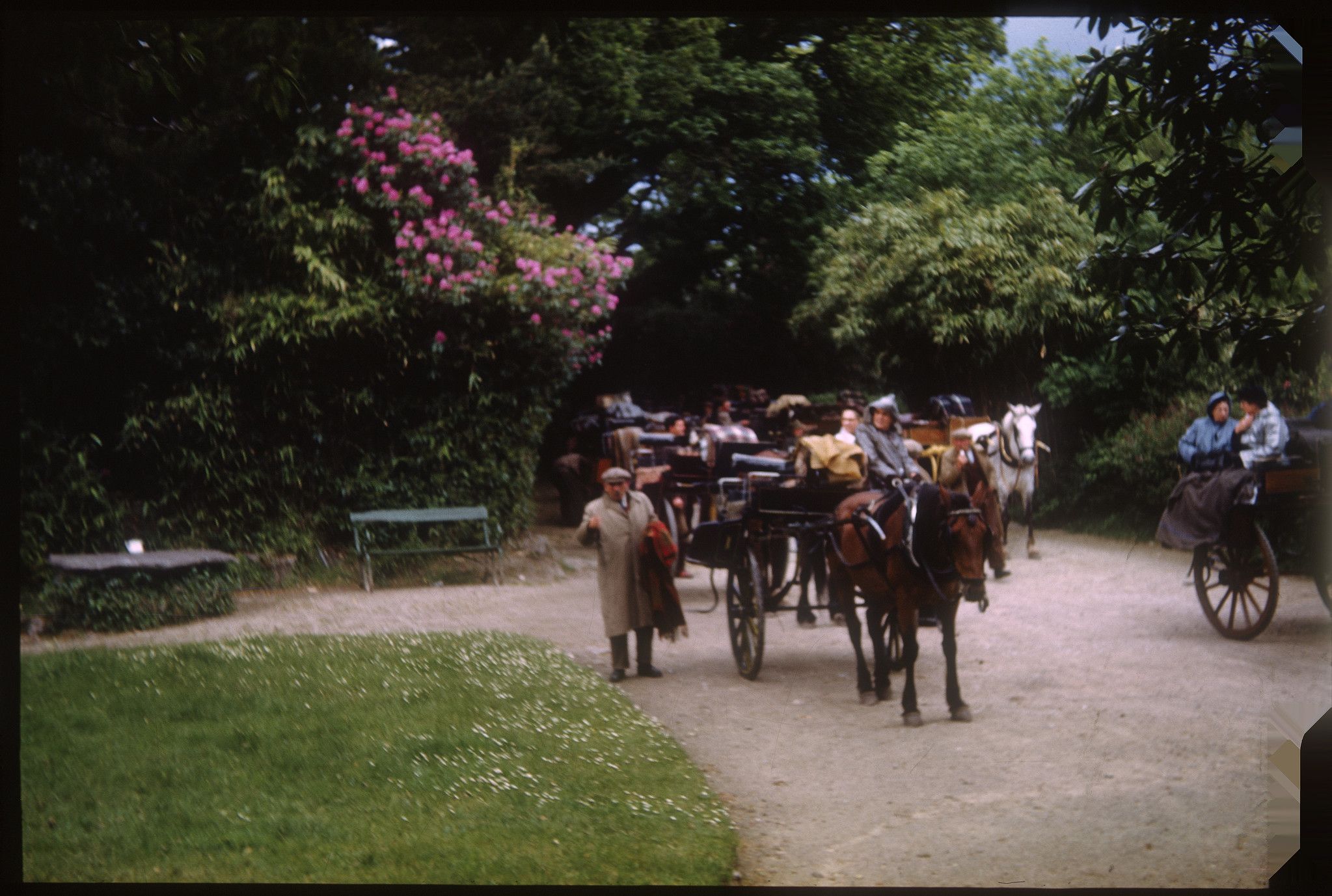 May 19, 1953, Jaunting cars going through the Killarney Lakes and park. May 19, 1953. Photo by  Martin J. Walsh Jr, of Murdock Minnesota, Kodachrome slide

The views from Dromkerry look out at the Gap of Dunloe, the Lakes of Killarney, the MacGillycuddy’s Reeks and Purple Mountain ranges, some of the most beautiful views in all of Ireland. 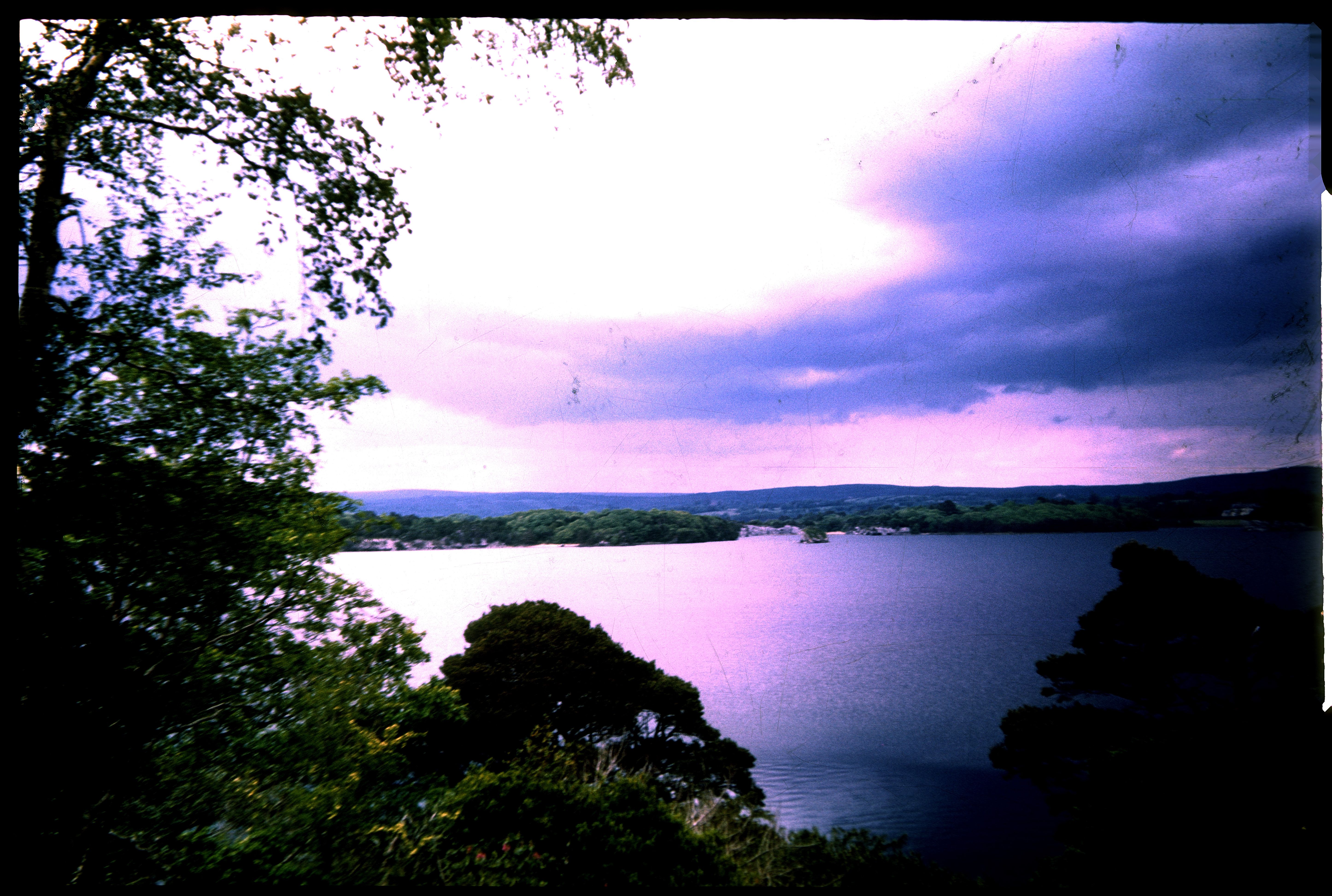 He took photos of a three-hour trip by pony and trap through the Gap of Dunloe and Lakes of Killarney, the railway station, mountain landscape views, and views around the countryside. 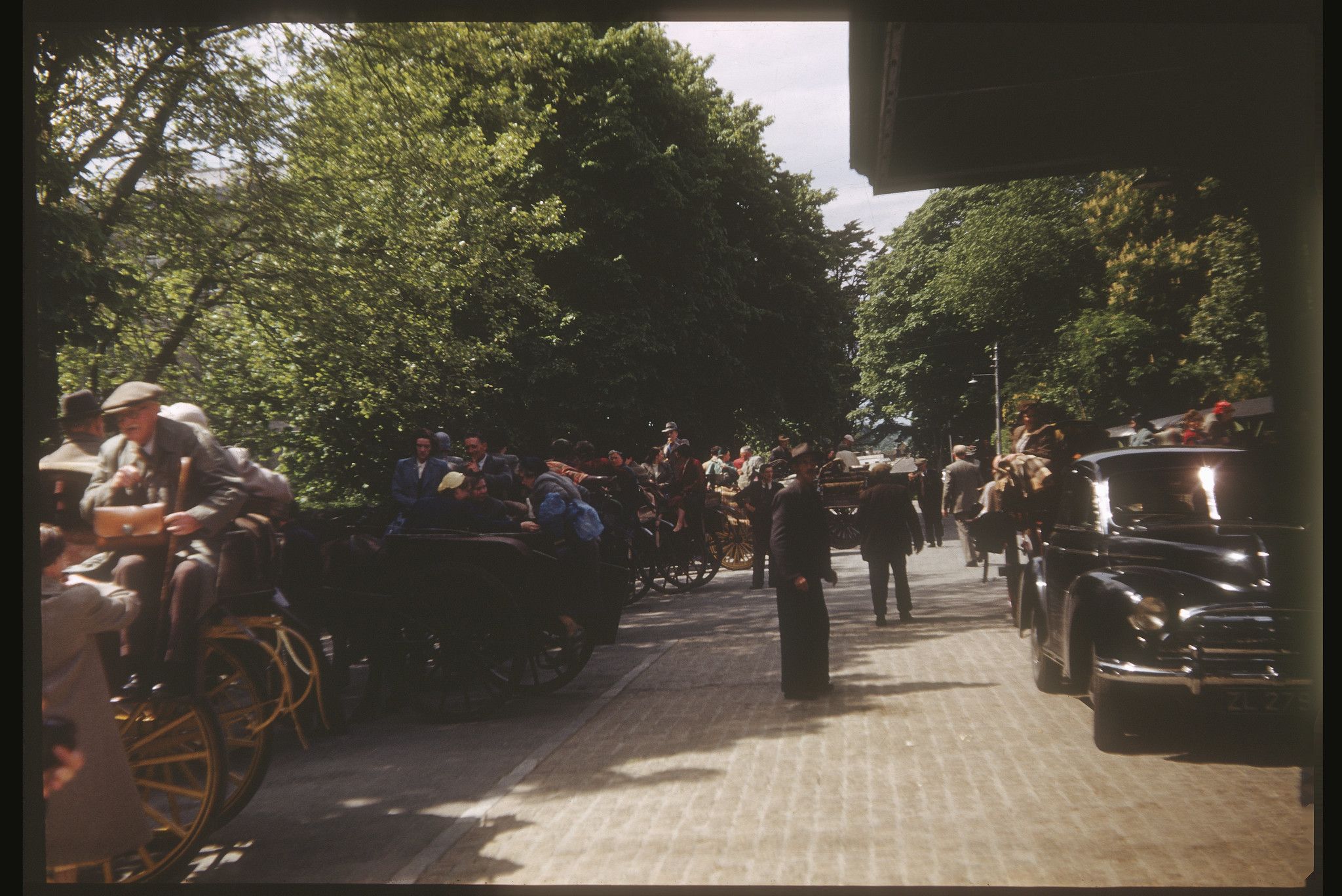 “Marty Walsh. Taken in Saint Stephen’s Green, Dublin. It was taken after a rain. My pockets full, May 16, 1953,” wrote my father on one of his image. He was staying across from the green at the Shelbourne Hotel, and even includes photos from his hotel room window overlooking the famous Dublin park. 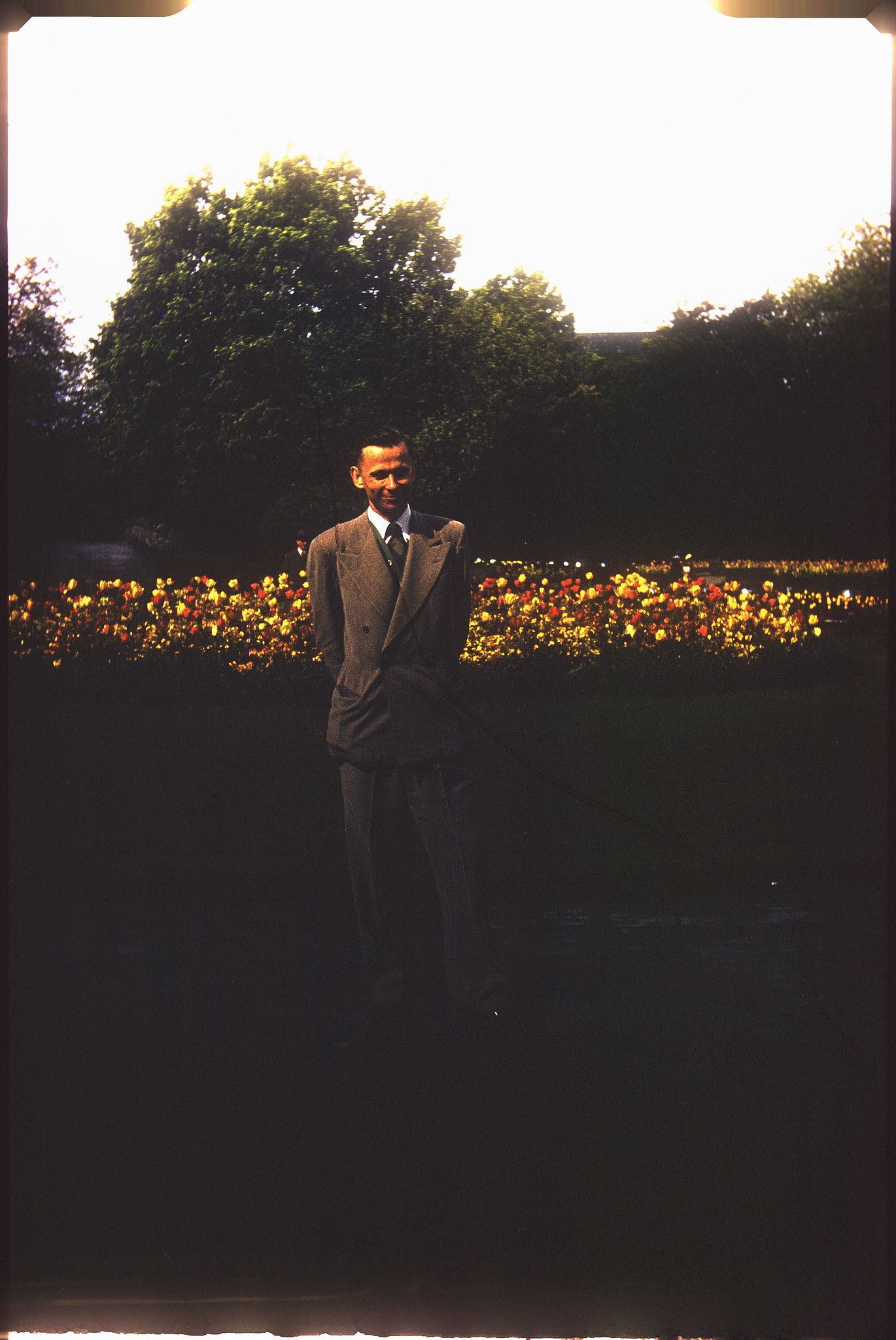 He apparently took trains and tour bus trips around Ireland, traveling to Dublin, Galway, Limerick, and places where the movie “The Quiet Man,” featuring John Wayne, Maureen O’Hara, and Barry Fitzgerald, was filmed in Galway. His Kodachrome slides indicate places such as John Wayne’s house and other details of the 1952 film. 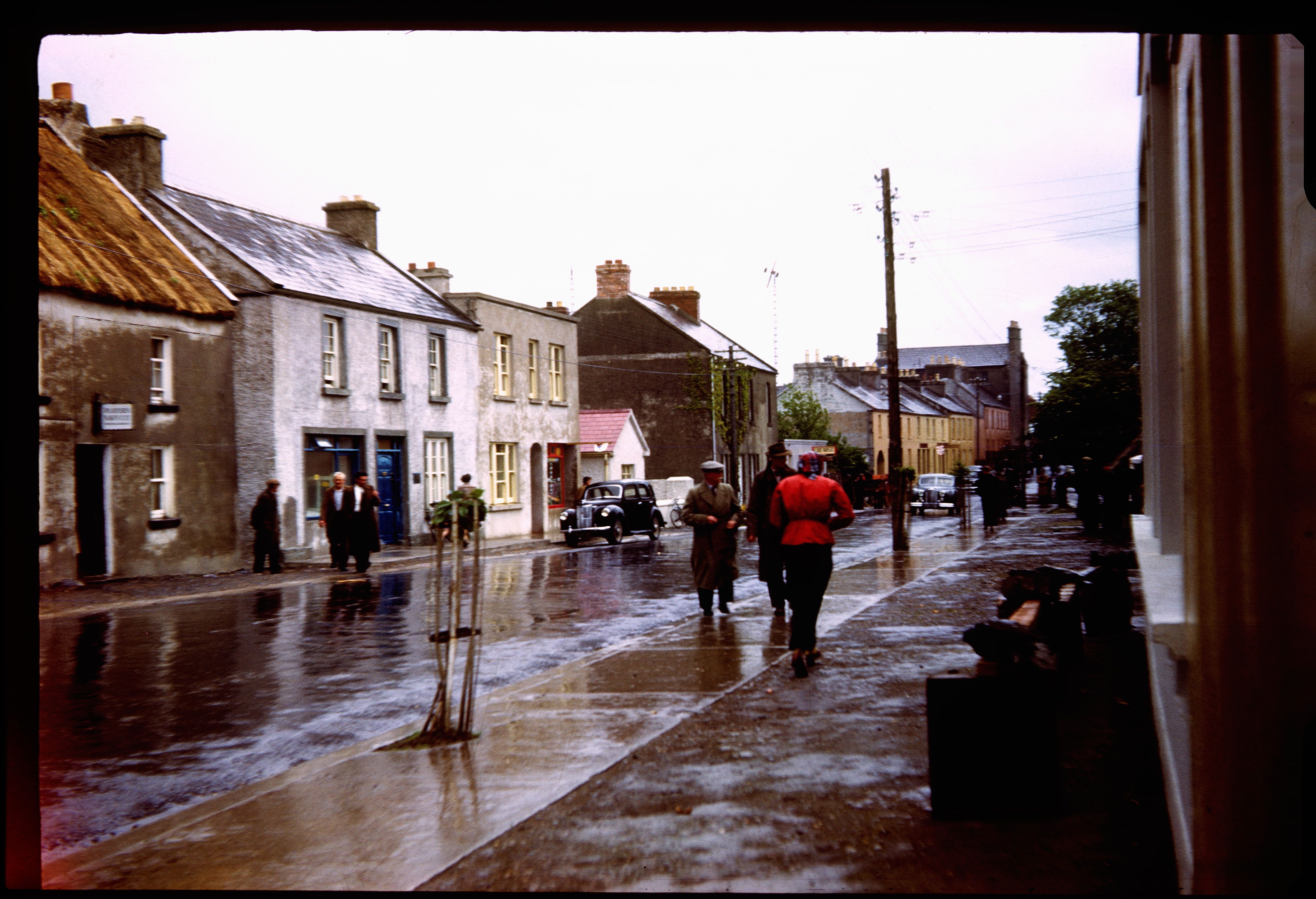 I’d even suggest “The Quiet Man” sparked a reason for my father to travel to Ireland, if not capture his interest enough to leave home to discover his family’s Irish roots. If interested, you can view “The Quiet Man” trailer here:

In January 2019, while staying at the Shelbourne Hotel, I actually watched “The Quiet Man” from the comfort of my hotel room as part of my stay, something unimaginable during my father's trip to Ireland. I did not have a hotel window view of Saint Stephen’s Green, instead, I had a courtyard view inside the hotel, and a view of the Irish flag from the rooftop. 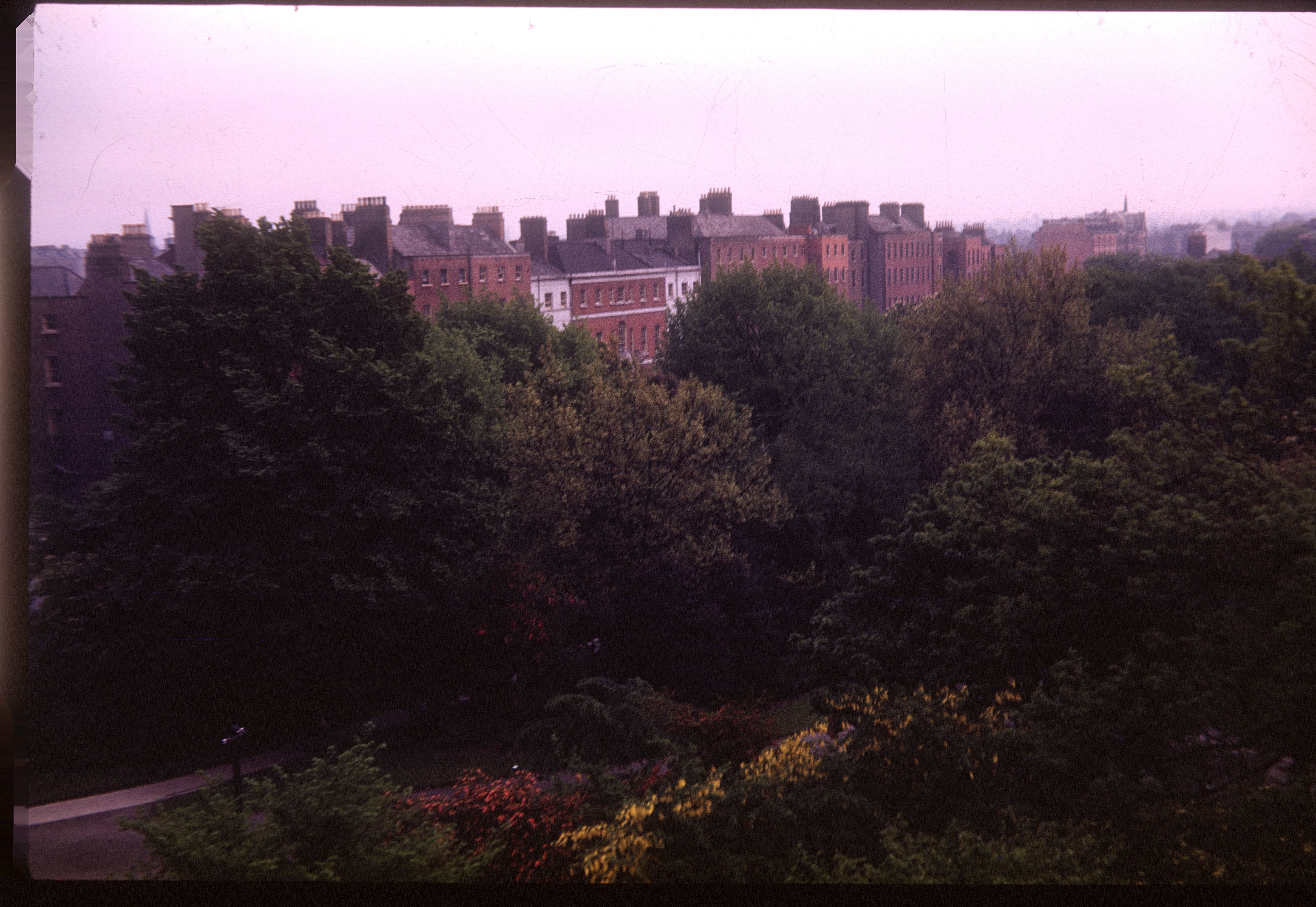 Jannet L. Walsh, of Murdock, Minnesota, is a photographer, writer, and educator. She is the author of the forthcoming creative nonfiction quest narrative "Higgledy-Piggledy Stones: Family Stories from Ireland and Minnesota," scheduled for publication in 2022 by Shanti Arts Publishing. She has compiled Irish Genealogy Toolkit, a list of resources for researching your Irish roots. You can follow Walsh on Facebook and Twitter.