The IRA's split-second decisions during Ireland's War of Independence

100 years ago the fighters for Irish freedom stood on precarious ground. Men in the field had to make split-second decisions that could result in advantage gained or lives lost. 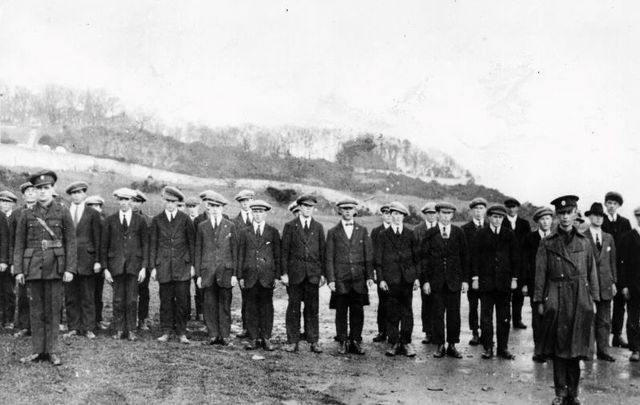 Excerpted from Echoes of Their Footsteps Volume I by Kathleen Hegarty Thorne. Researched by Patrick Flanagan.

100 years ago the fighters for Irish freedom stood on precarious ground. Men in the field had to make split-second decisions that could result in advantage gained or lives lost.

Consider the proposed assault on Scartaglin Barracks in Co. Kerry. In late February 1920, the whole plan was cancelled by the IRA commanding officer. A man purporting to be Peadar Clancy of GHQ was working with O/C Tom McEllistrim devising plans for the attack.

But things seemed too easy―or so McEllistrim sensed. “Clancy” encouraged the twelve-man team to creep up to the barracks and hurl grenades into the open windows. He assured the men that the RIC [Royal Irish Constabulary] would not have their steel shutters closed at the time of the proposed attack.

It was all too suspicious for McEllistrim, who did some scouting of his own. He found that the steel shutters of the barracks were already affixed inside the windows. Had the attack been attempted, all the grenades tossed by the IRA would have tumbled back on them. “Clancy,” whose real name was found to be Crowley, was subsequently shot as a spy outside Newcastle West in March (“I Gave the Order to Fire . . .” The Kerryman, 14 June 2011, p. 10) and (“Memorable Days of Terror and Heroism in County Limerick,” Limerick Leader, 30 November 1935, p. 11).

A month later on 31 March, the IRA, armed with what they thought was a better battle plan, attempted the feat. A row of houses on the east side of the barracks was occupied by the IRA, as was the space behind the fence running along the same line.

Meanwhile, an attack party had been commissioned to creep as close to the barracks as possible and then hurl bottles of petrol onto the roof to set the building on fire. The besieged garrison replied with heavy rifle fire, but the engulfing flames promised to drive them out of the inferno. To make a quick finish to this assault, the IRA threw homemade grenades at the building, only to inadvertently rupture the water tank at the corner of the roof of the barracks. All that cascading water worked wonders at taming the flames. The Volunteers on the village side of the barracks kept up a barrage, but their supply of ammo and petrol was low and the policemen inside the barracks were reinvigorated by their sudden good-luck deluge. With Verey signals having been sent skyward, reinforcements were sure to arrive soon. There was nothing sensible left to do but withdraw (Tans, Terror and Troubles by T. Ryle Dwyer, pp. 17 and 185−186).

Incredibly, these same IRA Volunteers, or men like them throughout the country, dared and challenged the powers-that-be and eventually won southern Ireland's freedom from a military might located 20 miles across the Irish Sea.