Sergeant John Duffy: An unlikely comrade during the Irish War of Independence

Through Sergeant Duffy's efforts, many men in Roscommon were spared capture and even death during the Irish War of Independence. 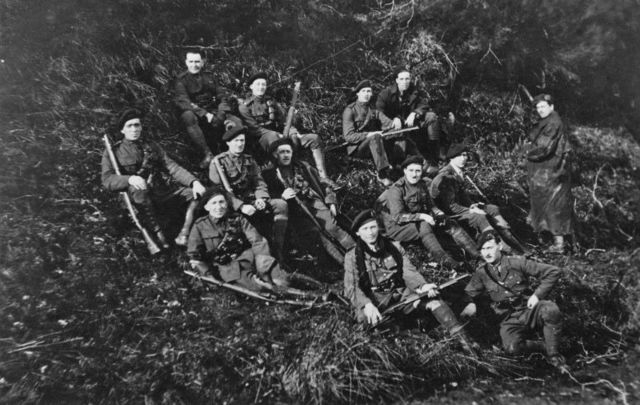 Men, possibly of the Royal Irish Constabulary (RIC) resting in the hills of Tipperary, Ireland, during the Irish War of Independence, 1921. Getty Images

The IRA of 1920 had intelligence men everywhere in Ireland. . . in Dublin Castle, in hotels, on the railroads, and even in the Royal Irish Constabulary (RIC). Sergeant John Duffy was an unlikely ally found in an unlikely place during the war. Stationed in Athlone, Kiltoom, and Roscommon town as a constable in the Royal Irish Constabulary, this man proved to be a bonanza of espionage information.

He was first placed in Athlone, where, after countless political discussions with the local physician, Dr. McDonnell, Duffy confessed that his sympathies were with the national movement and perhaps he should resign. The good doctor cautioned against such a move ---"You would be only one man with us, but you would be worth a hundred men by remaining in the Force."[i]

In 1917, accompanied by Dr. McDonnell, Duffy travelled to Dublin to meet Michael Collins. At that meeting, Collins asked him if he could secure the names from police records of prominent IRA men throughout the country who had come to the attention of Dublin Castle. He also asked Duffy if he could secure a key to the police cipher code. Duffy returned to Athlone where he worked officially with Dr. McDonnell, Father Michael O'Flanagan, and Willie Kilmartin, a solicitor's clerk in Roscommon town. Thomas Farrell in Roscommon town served as an alternate contact, while oftentimes Sean Hurley in Athlone received direct messages from Duffy.

Duffy warned local Volunteers of upcoming raids for rifles concealed in the cave at Coosan, and the reprisal raids by the RIC for the killing of Constable Potter at Knockcroghery in County Roscommon in August 1920.

When Duffy was transferred to Roscommon town, a bit of good fortune came his way. He spotted a key in the County Inspector's office, made a mental picture of it, went to McDonnell's hardware shop in town and, through a process of trial and error, made a duplicate which allowed him access to the office at any time. It was here in Roscommon that Duffy obtained the list of names of prominent IRA men throughout Ireland (there were 3,912 of them) and passed it along to Frank Simons, Adjutant for the 3rd Battalion South. He also succeeded in getting the key to the police cipher code which was also given to Simons. This code was used only for a three month period before being altered, but because the authorities did not suspect any subterfuge, the information gathered by the Volunteers for the next 120 days would be critical and timely. "A Post Office clerk named McNamara would transmit police messages to the I.R.A. for the purpose of decoding. In this way, the I.R.A. knew the contents of a message even before it reached the County Inspector's office."[ii]

On one occasion, Duffy was summoned with his colleagues to a meeting addressed by the District Inspector. The man told the constables that Michael Collins was coming into Roscommon town accompanied by Fr. Michael O'Flanagan. Collins was to be apprehended and shot. Alarmed by what he heard, Duffy travelled to Jack Brennan's house where a man was always "standing-to" to receive messages. Duffy left the particulars with this man who relayed the news that Collins was to be taken off the car as far out from Roscommon town as possible. Collins was rescued that evening and taken to Kilteevan where he waited until after midnight when the police lorries had returned to barracks before entering the town.

Another evening, Fr. O'Flanagan was scheduled to be the target of an Auxiliary assassination. Duffy dutifully warned the priest who then made his way to Summerhill College in Sligo for safekeeping. Fr. Flanagan knew the value of good propaganda. While at Summerhill he drafted a letter which detailed the raid on his house, the destruction of vestments found within, and the lifting of a £5 note. He then sent the letter to friendly faces in America who proceeded to post the letter on the door of the British Consul's Office. The Consul's Office checked with Westminster to ascertain if there was any truth to the allegations. The British Government contacted Dublin Castle who in turn sent a convoy of twelve lorries down to the Roscommon office. The County Inspector dutifully covered his tracks with the British authorities. Sgt. Duffy was not satisfied. He gained access to the Inspector's office, and copied the file regarding the raid. The file ended up in Michael Collins's briefcase who, in turn, sent it to America to be posted on the British Consul's doorway together with the original poster about the raid.[iii]

The placement of Duffy was providential for several key men in Roscommon. He saved Pat Madden and Frank Simons from an untimely death by raising such a ruckus when the Black and Tans wanted to take the lorry out to Waterloo (where the men were supposed to be sleeping) that the District Inspector was forced to "ground" the Tans and not allow them out of barracks at night.

On another occasion, when Dick Mee from Curraghboy was being held in Roscommon gaol, Duffy learned that the Tans had plans to take Mee out after all the RIC had gone to bed and shoot him. Duffy warned Mee not to leave lock-up voluntarily with anyone. Duffy spent the entire night in the dayroom making certain no unauthorised "escape" was implemented by the Tans. Mee was moved to Custume Barracks in Athlone the next day.[iv]

One evening in late 1920 or early 1921, Sgt. Harte of Roscommon Barracks informed Duffy that the Auxiliaries of Longford were coming to Roscommon town to sack it and arrest all the IRA local leaders. Duffy immediately scaled the old gaol wall and found Volunteer Tom Farrell who relayed the message to the men in the area. None of them fell victim to outrageous British forces that night. Duffy also sent word to the Athlone and Westmeath Volunteers who were camped out on an island in Lough Ree that they should immediately vacate the area. They too were saved from a surprise and probably deadly visit by the British military.

Duffy was a well-placed man in a well placed time. Through his efforts, many men in Roscommon were spared capture and even death. His motivations remain untold and unknown. Yet one needs to ask the question "How would the main course of Irish Independence been altered without a bit of Irish patriotism coupled with a dash of bravado from Sgt. John Duffy?"

Read More:  How Michael Collins wrote the book for revolutionaries