How U2 helped me beat my cancer

“One man’s story and how I harnessed the power of U2’s canon to pull me out of the depths of hopelessness.” 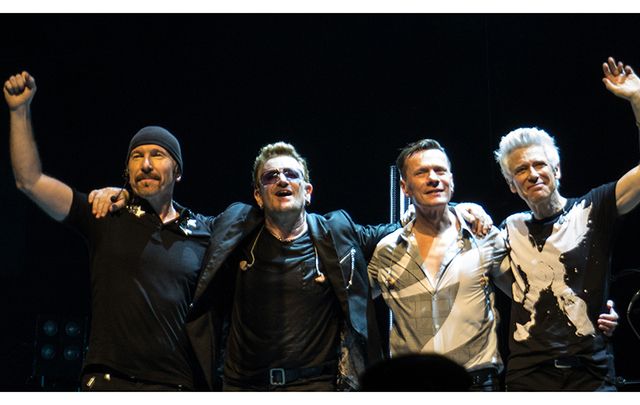 “Music is a higher revelation than all wisdom and philosophy.”

Music heals. There is no doubt about it. But U2 music? Now we’re on a different level altogether.

An Edge riff. A Bono operatic solo. Larry ripping on the drums. Adam pounding the bass. Add them up and what do you get? A whole greater than the sum of its parts – and the best medicine you could possibly imagine, when you need it the most. Throw in a thoughtful and powerful message about life and existence, and you have true poetry in music. Anthems and ballads that create a seismic shift in one’s perspective on life.

I am a living testament to the healing power of music – and U2’s music in particular. Plus, I have a little backup on that when we talk about the healing power of music. All you need to do is search the Internet for "music heals" quotes and look at the avalanche of support for that sentiment. So, let me share one man’s story and how I harnessed the power of U2’s canon to pull me out of the depths of hopelessness.

First, a little background: I was diagnosed with stage-four prostate cancer in January 2015. The prognosis was grim. I had a prostate-specific antigen test (PSA) of over 800. Normal is 4 or under. The cancer had spread to my skeletal structure and other organs inside my body. Not a pretty picture. If you want to know more about the battle I faced, you can check out this link to learn more. But my mission here is to focus on U2’s music and the huge role it played – and continues to play – in my healing process.

I’m an Irishman through and through. My dad’s family was from Newcastle West in Limerick, and my mom’s family was from the north, near Donegal. So, I naturally gravitated to the music as it emerged back in the early ’80s. With those Irish roots, the U2 gravitational force pulled me in as Belfast burned and the band appeared with a voice of reason. They were among the few who stood against the insanity taking place in the homeland. I adopted them as my Irish brothers.

They helped to drive and spread a common purpose, fighting injustice wherever they could and being a catalyst for positive change on a wide range of issues. Healing their homeland was one of their first acts of seeming hubris, but healing the ills of humanity was also a calling – and they went for it. They used the power of their music to take us as fans with them on their journey.

From their earliest protest songs on "Boy," "October," "War" and "Under A Blood Red Sky" – with Edge using the guitar to lay siege, Bono belting out verse after verse and Larry and Adam adding their own unique, world-class contribution on drums and bass – they have forged a unique path. As they matured, they branched out with the ONE movement, the RED campaign and more. The body of work they’ve left through their music and philanthropy is something we could never have expected or imagined out of four knockabouts from late-’70s Dublin. Even today, in their most recent work, the scars of the ’80s are still fresh and poignant and continue to drive their message. That music, and those lyrics, resonated deeply within my soul.

But I digress. Back to the cancer.

As I descended into the hell of chemotherapy and fought for my life, I wasn’t sure what to expect. I was looking at a death sentence and began to prepare to enter that place "Where The Streets Have No Name." Was I too far gone? My family stepped up in a big way to shoulder whatever portion of the burden they could. Always so positive and uplifting. Always there to help rally me on. And going on three years into this battle, they are still right there with me.

In addition to family, there was a wide circle of friends to lean on – including a community of U2ers from around the world (I call them The U2 Society) and others that rose to my side. I will never, ever forget their love and support. But this was my battle, and I was the one who needed to fight it.

I am not afraid of anything in this world;

There's nothing you can throw at me

That I haven't already heard.

A song that I can sing in my own company.

Chemotherapy kills everything inside you. After a chemo session, I felt like (and probably looked like) the walking dead. Sleep was my best friend for days. When I did arise, it was a slow process, but Edge’s acoustic guitar work and the sweet lyrics of “Yahweh” gave me purpose and meaning. The acoustic version of that song became my go-to during those dark days. And when I'm in a jam even now, I still use it as my solid footing: “Take this soul, stranded in some skin and bones; take this soul, and make it sing.” It was always a battle to get up off the canvas after being knocked out, but I found I still had my spirit, my Irish will and my edge.

And love is not the easy thing, the only baggage you can bring

Love is not the easy thing, the only baggage you can bring

Is all that you can't leave behind.

And if the darkness is to keep us apart,

And if the daylight feels like it's a long way off,

And if your glass heart should crack,

And for one second you turn back,

Oh no, be strong.

I had spent most of my life working on my spirit, and all that effort was starting to pay some dividends as I fought to raise myself from the ashes. Faith, hope, prayer, meditation and the like. Along with my own practices, U2’s music was there to drag me away from the darkness and back into the light – to give me purpose. At its core, listening to U2 is a spiritual experience. It seems clear to me they were spiritually inclined and anointed at a very young age, and that influence has continued to evolve and grow. Their Irish Catholic roots make an appearance from time to time – leaving a rosary on the mic as they exited a show in Chicago a few years back is one of the many examples that come to mind – and the lyrics are full of spiritual references.

Listen to me now

I need to let you know

You don't have to go it alone.

— "Sometimes You Can't Make It On Your Own"

And over the years, when I’ve gone to a U2 show or listened to their music, I have often felt love, peace and concern for my fellow humans. But the music has always been the driving force in that regard, and it still is. I think Bono put it best in an interview with the Los Angeles Times in 2004: “We can be in the middle of the worst gig in our lives, but when we go into that song (“Where The Streets Have No Name”), everything changes. The audience is on its feet, singing along with every word. It's like God suddenly walks through the room. It's the point where craft ends and spirit begins. How else do you explain it?”

During my darkest days, both physically and mentally, it seems U2 has always played a role in lifting my spirits. I’d come out of my comatose state, slip on my headphones and get inspired. It could be a drum solo at the end of “40.” Or “One,” “Yahweh” – you name it. I was like Lazarus rising from the dead when the U2 music kicked in.

Then toward the second half of 2015, this battle I was waging, literally between life and death, took a turn in my favor. The chemo did its job for the time being, with the help of some other pharmaceutical friends. I was able to beat this wretched disease, which I’ve christened “Big Nasty,” back into submission. U2 was on tour and my special-needs younger brother, John, and I decided to make a cross-country road trip from Chicago to the East Coast. We stopped to visit family. We stopped at the Rock & Roll Hall of Fame in Cleveland. But our real destination was a date with U2 at Madison Square Garden with my two kids. 'The Innocence+Experience tour.' The show at the Garden was epic. I was alive. I was with the ones I loved, and we danced and rolled with the music for two to three hours in a Garden skybox.

Then in April 2016, tragedy hit. My wingman and best buddy, John, left this life suddenly. John, in spite of his lifetime of infirmities, was a musical genius. An amazing soul who was also a great singer in his own right. When U2 released “Every Breaking Wave,” John gravitated to the beauty of that song quickly, and we would listen to it seemingly without end, picking up all the nuances. Music was a cornerstone of our lifetime together.

Fast-forward to Christmas 2016. Big Nasty returned, and I was called into battle once again. It was ugly, and this time I was taking a very serious beating. I lost all mobility. I couldn’t walk. I couldn’t eat. I could barely drink. I was a dead man walking.

Yet my loving support system has kicked into high gear once again, along with my medical team – and of course, Drs. Hewson, Evans, Clayton and Mullen. It's May of 2017. I'm alive and thriving, and living in the moment.

The songs are in your eyes

I see them when you smile

I’ve seen enough, I'm not giving up, on a miracle drug …

Of science and the human heart, there is no limit.

So, I’m ready to hit the road. I’m digging deep, and I plan to attend 11 shows this spring – from Seattle to Miami, from Paris to Amsterdam. How appropriate that my Irish brothers will take us back 30 years to the "Joshua Tree" period. God knows we need it, with everything we’re facing today. And when they hit the Southern Hemisphere (let’s hope), you know I will be there too.

I am eternally grateful for their contribution to humanity, and all they’ve done and are continuing to do to try to heal the ills of this world. But I am also very thankful for the connection I made with them so many years ago, and for the profound healing energy their music provided me during my times of starkest despair. For me, U2 have truly been a Miracle Drug.

Read more: U2 take aim at Trump in first concert of 'The Joshua Tree' tour

* This article was originally published on www.atu2.com.