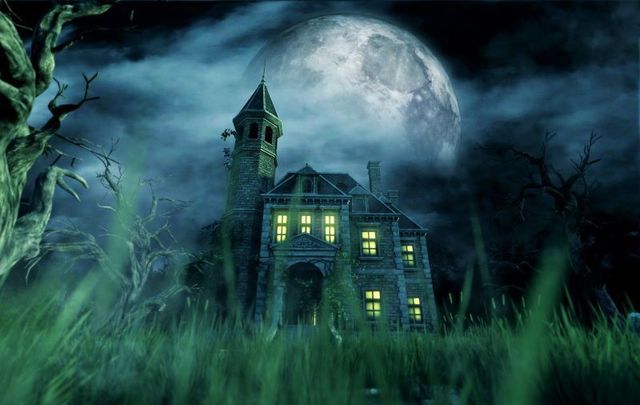 Going up in flames at the hand of villainous local youths, its ruins left to cast a long and sinister shadow over County Wicklow is a sad but perhaps fitting end to the haunted Fernhill House that once accommodated rampaging companies from the Catholic Guides of Ireland.

For 50 years, the old estate house – owned by the old Dublin Diocese and let to CGI – was besieged by teenage females with packed haversacks, polished belt buckles, straightened lanyards, and woggles, heading off for a week of all-girl hiking, campfires, and other exercises in self-sufficiency.

By the time our company was assigned to a week of campﬁres, sing songs, hiking, bird watching, and other badge-worthy pursuits, the old country house had long since lost its luster. The paintings and tapestries and furniture from its grand old days had been sold off long ago, so by the time the house was bequeathed to the Girl Guides, the ﬂoors were bare, and lumpy mattresses lay on the heavy metal bunk beds that had been donated from some abandoned military barracks. All that was left of its former glory was the mahogany stairs and banisters and the ramshackle wardrobes that couldn’t ﬁnd a buyer when the house was stripped.

It was a dark and gloomy house, made worse each night by the banging of window shutter after window shutter as Girl Guides in each room barricaded us into a mahogany tomb for the night.

Our ﬁrst campﬁre came after an afternoon hike. Brigid Boyle and I were late getting back. We were running up the stairs to get into our pajamas when everyone else was already assembled downstairs. There were three of those bunk beds in the corners of our dorm and three single beds in the middle.

I’d ﬁnished changing and was standing by the door waiting for Brigid when my bunk suddenly banged and rattled and violently shook its way out of the corner toward the center of the room. Nothing else moved. The noise was as scary as the shimmying.

I struggled with the loose doorknob to escape.

“Wait!” Brigid cried, running after me, with one leg in her pajamas and one pajama leg trailing behind her as we bolted down the stairs and into the room where the campﬁre was burning. We were shaking. The story twittered through the troop and the captain soon had a panic on her hands.

We were hoping for some explanation, like an earthquake maybe, but got a tongue lashing for scaring the other guides and were then marched back into the room to tell everyone we’d made it up. I felt like a fool. I hated her for making us sound like liars and for not explaining what happened. She was the captain, she was the adult in charge, and she was supposed to know these things. They hated us as much as we hated her. No one would speak to us for the rest of the night, so we were scared, cold, and maligned.

After the campﬁre, we had to go back into that dorm room. The bunk was about three feet away from the walls. It would have taken ten grown men to move it. We couldn’t have done it. The captain knew it, but she cared more about keeping the troop under control. She just told us to go to bed, which meant I had to get back into that bottom bunk. I pulled the blankets up tight around my chin as if they would aﬀord me some protection. Brigid was in the single bed beside me doing the same.

“What if it comes back?” she whispered. “I don’t know,” I whispered.

“Shut up,” said my cousin from another bunk.

I spent the night looking at the slats in the bunk above me. At one point, I leaned over to look into the gap between the wall and the ﬂoorboards to see if something were there. I was terriﬁed it would slither back up through that space. I was far too petriﬁed to look under the bed in case it already had, so there I lay for hours and hours, hiding under a blanket, heart racing, craning to see and hear every creak and movement, while everyone else, including Brigid Boyle, fell asleep.

For the rest of the week, Brigid and I had to scrub the pots and breakfast dishes while the others went hiking.

“What do you think it was?” she asked.

“A big angry ghost,” she added.

“Do you think it’s still here somewhere, watching us maybe?” I asked. We looked around the kitchen, scaring ourselves silly.

For the rest of the week, lots of small glittery things disappeared: earrings, trinkets, jewelry. The captain said we had a thief in our midst, but I was convinced the angry ghost had taken them. We were told to search the whole house, which meant we had to go into old, cold, dusty rooms where ﬁres hadn’t been lit and humans hadn’t been for decades.

In the corner of one room, I saw an empty mahogany planter that was full of rubbish. While I debated whether I should put my hand in to check for contraband, the rubbish started to move as if something had woken up underneath. I ran out of the room and out of the house and stayed out there in a ﬁeld until I’d convinced myself that a mouse was in the planter and a magpie was stealing the glittery things. That’s what magpies do after all.

Later, I decided it was all nonsense and that the bunk was caused by a seismic shift. I forgot about it. But I hated mahogany forever after.

*This story was submitted to IrishCentral by Karen Frances McCarthy, author, former journalist, and medium. She is the author of "Till Death Don’t Us Part" (White Crow Books 2020). You can learn more about her on her website, Facebook, Twitter, and YouTube pages.