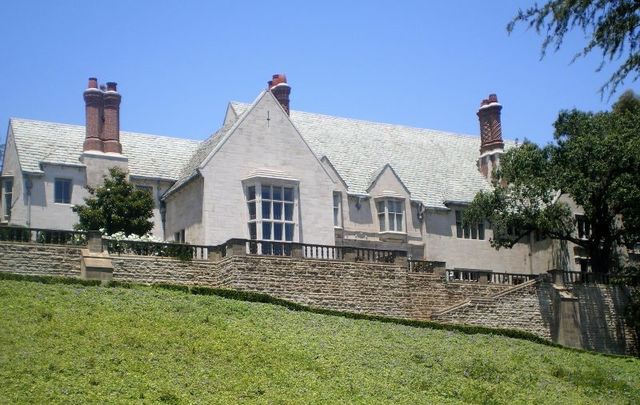 The 2007 movie "There Will Be Blood" was based on a novel called "Oil!" that was written by Upton Sinclair.

The main character in the story, Richard Plainview, was portrayed by Daniel Day-Lewis and was loosely based on an Irish American oil tycoon called Edward Doheny (1856-1935) from Wisconsin who drilled the first oil well in LA in 1892.

Edward's father Patrick had fled Tipperary to escape the Famine and landed in St John's in Newfoundland where he met and married local a school teacher. Patrick attempted to make a living whaling, but it didn't prove to be feasible so he moved to Wisconsin with his wife Ellen where Edward was born and raised.

In the 1920s, Edward was implicated in a national bribery case that was called the Teapot Dome scandal that involved the Warren G. Harding administration from 1921-1923. The case was investigated by Senator Walsh, an Irish American from Butte, Montana. Unlike the politician (Albert Fall) who received the 100k bribe, Edward managed to evade charges and imprisonment.

In 1928, Edward gifted his 35-year-old son Ned a 55-room, 46,000 sq ft Tudor-style mansion situated on 16 acres of land in Beverly Hills in California. The mansion was designed by Gordon Kaufman who is also famous for co-designing the Hoover Dam in 1935.

After a brief investigation, the authorities ruled the deaths a murder-suicide by an unstable Plunkett. One of the theories was Plunkett had requested a raise and lost his temper when it was refused.

In an article for the LA Times in 1929, one of the forensic investigators who had worked on the case, Leslie White, argued against the possibility of Plunkett being the perpetrator on the grounds that Ned Doheny's gunshot wound was inflicted at close range while Plunkett was not.

Ned Doheny didn't receive a Catholic burial and it's been speculated that a Catholic funeral wasn't permitted because church authorities weren't convinced of Doheny's innocence. Both Plunkett and Doheny were laid to rest at Forrest Lawn, a secular cemetery, beside each other.

Another speculation was both Doheny and Plunkett had engaged in a suicide pact because both parties were both due to appear at federal court.

It was also rumoured that both men were lovers and another theory was Ned's wife had walked in on both Plunkett and her husband and shot both of them in a jealous rage. The reason for this suspicion is because the incident occurred between 11pm and 11:30 pm and the police weren't contacted until 2 am. Allegedly, Lucy had rung a doctor long before she rang the police and the testimony seemed rehearsed when the police did eventually arrive.

The police ruled a murder-suicide; the case was closed within 36 hours of the initial police investigation. Ned Doheny's wife Lucy remarried and continued to reside at the Greystone estate with her new husband and five children for a further thirty years before the property was sold to Paul Trousdale in 1955.

In 1965, the city of Beverly Hills purchased the estate and opened it as a public park. The estate has been used for various Hollywood movies, private parties, and magazine shoots, and hosts the annual Hollywood ball.

TV programs and movies that have been filmed at Greystone include the first episode of "Knight Rider," "Entourage," "Gilmore Girls," "Murder She Wrote," "MacGyver," "Columbo," the "Spiderman" trilogy, "Ghostbusters 2," "Rush Hour," "Revenge," "X Men," "The Social Network," as well as "There Will Be Blood," which was loosely based on Edward Doheny.