Like the protests across America in 2020, the Selma to Montgomery March was partially caused by the callous murder of a black man at the hands of a white law enforcement officer. 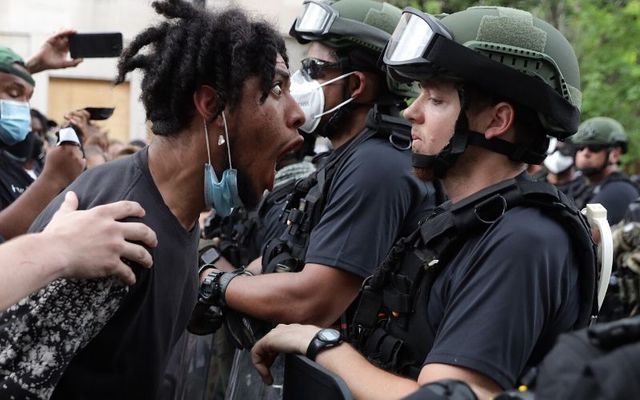 A protestor shouts at a law enforcement officer during a protest in Washington DC. Getty

In 1965, Martin Luther King and the Southern Christian Leadership Conference chose to peacefully react to disgusting police violence during a civil rights march from Selma to Montgomery in 1965, and the protestors in many cities across the United States today have missed a trick by not following their example.

The eyes of the world were fixed on the southern state and people all around the globe watched on in horror as Alabama State Troopers viciously attacked peaceful black protestors who were simply exercising their First Amendment privilege.

Like the protests across America in 2020, that 50-mile march was partially caused by the callous murder of a black man at the hands of a white law enforcement officer.

The murder of activist Jimmie Lee Jackson sparked national outrage in black communities across the US, but King and the SCLC preached peace, even in the face of overwhelming police brutality.

They knew that the most effective way to bring their plight to national and international attention was to show the cowardice and viciousness of the Alabama State Troopers in black and white in the national media.

And that is exactly what happened.

A picture of protestor Amelia Boynton lying unconscious after being horrifically beaten with billy clubs and tear gas surfaced on the front pages of newspapers around the world and the shock and anger among ignorant white communities was palpable.

The result was a massive wave of public pressure on Lyndon Johnson to pass the Voting Rights Act, which gave a huge amount of southern blacks the right to vote for the first time.

While it is still inherently racist on many levels, America is now having new, more nuanced conversations about race.

Whereas in the 1960s black people couldn’t get work on account of their skin, now there are protests about the lack of top-ranking black employees.

Whereas in the 1960s police actively participated in black lynchings, now those atrocities are confined to an increasingly small group of racist cops.

This is the final push to finally level the racial playing field in American society and it requires nonviolent protest.

Images like that of Amelia Boynton or images of Birmingham police using firehoses and police dogs against protesting children in 1963 helped to achieve that goal by highlighting the utter disdain southern white law enforcement showed for innocent black protestors.

To a degree, today’s protests are also about winning over a different cohort of white people.

These protests are not about winning over liberal Twitter users; they are already on board with the cause.

Rather, these protests are about winning over conservative white communities that have seen the progress America has made since the 1960s and refuse to believe or admit that there is still a racism problem in the country.

Violently reacting to police brutality will not help in that battle.

While it is entirely justified to riot in response to the pathetic and cowardly attacks from some members of the police over the last week and a half, it is not the right approach.

There have been isolated incidents of police brutality throughout the George Floyd protests that could have made a profound impact on the world over.

A video of a police officer pulling down a protestor’s mask and spraying him with pepper spray while the protestor’s arms were in the air should have been broadcast on all major news networks. It wasn’t.

U.S. security forces pulling anti-COVID19 facemasks on protestors & journalists to directly pepper spray them in the face. This type of attack causes severe respiratory damage that can prove deadly during a pandemic. #Anonymous #ICantBreathe #GeorgeFloyd pic.twitter.com/JrHmBVMVQS

The video of an NYPD patrol car driving headfirst into a crowd of protestors should have been top-billed news on stations across the world. It wasn’t.

A different angle on TWO NYPD CARS that DROVE INTO PROTESTORS. pic.twitter.com/s7zRAOzRhh

The video of Salt Lake City police officers ruthlessly shoving an elderly man with a walking stick to the ground should have made international headlines. It didn’t.

Salt Lake City cops shove down an elderly man with a cane for the crime of standing along the street: pic.twitter.com/PCLkHqQtJg

Similarly, images of a CNN news team being arrested on live television while covering the initial protests in Minneapolis should have become a symbol of police contempt during the protests.

However, this flagrant disregard for the freedom of press has been almost completely forgotten as violent scenes erupt all over the United States.

All of those isolated incidents were lost in the sea of images of burning police cars and looted department stores and they immediately lose their impact.

The rioting - and especially the looting - in cities across the US has given stubborn conservatives an excuse to condemn the protests and ignore the indefensible, systemic racism that exists in American society today.

These are the people that the protests need to get through to, not the liberal proponents of the Black Lives Matter movement.

There is one person, above all else, that these protests need to get through to and that person is Donald Trump.

The President has used the riots to accelerate his campaign ahead of November’s elections, using the crisis as an excuse to attempt to turn the electorate against Democratic leadership. His supporters have lapped it up.

Imagine, for a second, that the President was faced with images of police brutality in the midst of an entirely peaceful protest following the death of George Floyd.

There would be no defense, no excuse to call in the National Guard, and no means to stoke racial tensions even further.

But these riots have provided the Commander in Chief with an excuse to ignore that which is indefensible and divide a country which is already inherently divided.

The protests have lacked leadership unlike those organized by Martin Luther King and the SCLC in the 1960s. In truth, they have lacked any sort of leadership at all and we can only hope that this is not a huge chance missed.