Dublin protests called for an end to racism in Ireland and an end to Direct Provision as George Floyd's death sees protests around the world. 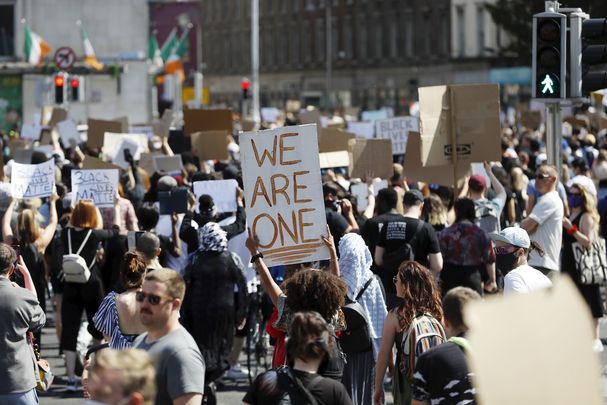 "We are one" - Ireland stands in protest with anti-racism demonstrations in Belfast and Dublin. RollingNews

As demonstrations in solidarity with protests in the United States took place across the world crowds of peaceful protesters gathered in Belfast and Dublin.

Protests took place around the world on Monday, including those in Belfast and Dublin, in the wake of the death of George Floyd on May 25 at the hands of Minneapolis police.

Floyd was stopped on suspicion that he had used a forged $20 note. Police held him down, including Officer Derek Chauvin who knelt on Floyd's neck for 8 minutes and 46 seconds. Video footage of Floyd crying out for help during the arrest sparked outrage around the world.

Chauvin has since been charged with third-degree murder, however, protesters are calling for harsher charges, charges for the other officers involved and an over-all change to how African Americans are treated by the police. 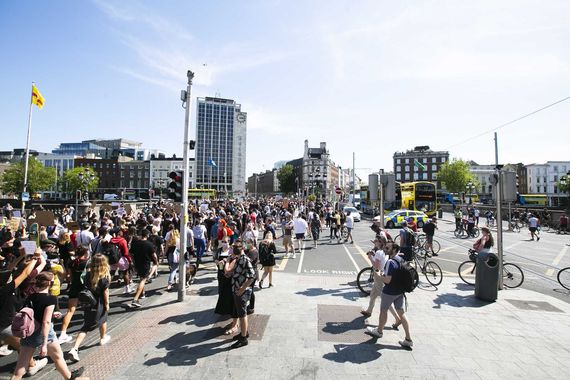 O'Connell Bridge, Dublin: Anti-racism march heads for the US Embassy, in the wake of George Floyd's death.

In Belfast, a vigil was held on Sunday at Writers' Square before a demonstration at City Hall on Monday. Protesters held signs reading "Black Lives Matter", the Press Association reported.

In Dublin, the Irish Times reports that 5,000 people march from the GPO, in O'Connell Street to the American Embassy, in Ballsbridge chanting "Black Lives Matter", during their demonstration. The protest, mostly filled with young people (aged 16 - 30), held signs calling for an end to racism and Ireland's system of asylum seeker accommodation Direct Provision.

The Dublin demonstration ended outside the American Embassy, in Ballsbridge, where the crowd chanted George Floyd's name.

While it's not clear who organized the event, all advertising had called for social distancing due to the COVID-19 outbreak. However, the Irish Times reports that the restrictions were not adhered to during the protest.