IrishCentral contributor Patricia Killeen takes a look at An Ghaeltacht-sur-Seine (the Gaeltacht upon the Seine) in Paris - "the smallest Gaeltacht in the world". 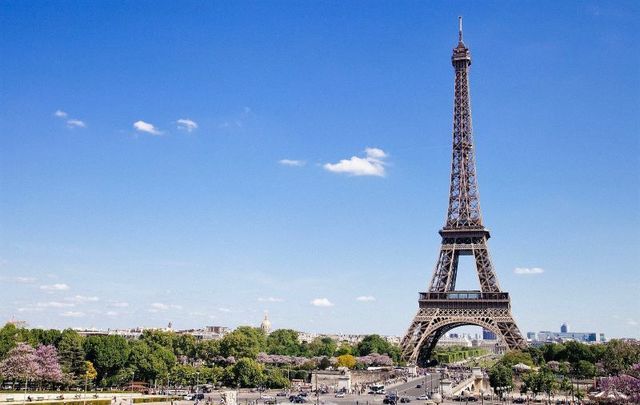 When Ciarán Mac Guill moved to Paris almost three decades ago, the accountant from Dundalk was determined to blend into the Parisian landscape. However, he kept on bumping into other Gaeilgeoirí!

He subsequently became treasurer of the Paris GAA Club and penned a successful Irish-language phrasebook for Assimil publishers, who specialize in making learning foreign languages intuitive.

In 2007, when TG4 came to Paris to film a documentary called Thar Sáile, about Irish-language speakers abroad, they asked: “How many are you? Where do you get together?”

Mac Guill realised there was nothing in place.

That inspired him, along with Fr David Bracken, the then Irish chaplain to Paris, and Maebh Enright from Belfast, to found An Ghaeltacht-sur-Seine (The Gaeltacht upon the Seine) 12 years ago. With 350 members, it is proud to be “the smallest Gaeltacht in the world” and is an official branch of Conradh na Gaeilge (The Gaelic League). 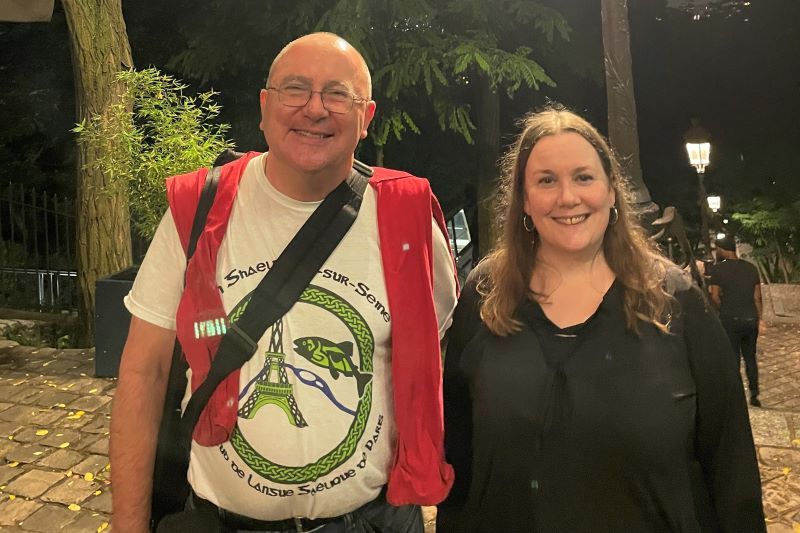 Stiofáinín Nic Cárthaigh and Ciarán Mac Guill on the steps of Montmartre at Corcoran's Sacré-Coeur.

The club meets informally on the last Tuesday of every month at The Quiet Man pub in the Marais, to chat over wine and pints of Guinness “as Gaeilge”, and people are encouraged to speak Irish even if they only have a “cúpla focal”. About 25 people attend on average.

Last Tuesday, I attended the get-together in Corcoran's Sacré-Coeur up in Montmartre as The Quiet Man is currently shut. I met a fabulous group of fun, intergenerational, and inclusive people.

On any given night, there are Irish speakers of all levels and abilities, from native and fluent speakers to pure beginners. There was even a Nicaraguan woman with her Swiss partner, who, along with having great fun, left the table with ten Irish phrases committed to memory and diligently copied down beside the phonetic pronunciation. And our fabled luck was with us, as the rain held off while we sat on the pub terrace under the romantic Parisian lantern lights.

In the course of the evening, Mac Guill pointed out that “the Irish and French languages have more in common than Irish and English, in part because Ireland, Spain, Portugal, and France all spoke Celtic until the Romans came”.

Along with these monthly meetups, An Ghaeltacht-sur-Seine also organizes picnics, film evenings, céilís, and other social events, sometimes in association with the Embassy of Ireland in Paris or the Centre Culturel Irlandais or the Association Irlandaise. Last November, they organized a Sean-Nós singing workshop. As part of their Seachtain na Gaeilge (Irish Week) program this year, they organized, in conjunction with the Embassy of Ireland, a webinar on the theme An Ghaeilge thar Sáile (The Irish Language Overseas).

The next An Ghaeltacht-sur-Seine special event, their Féile Lúnasa (August Festival), is coming up shortly and will be organized in conjunction with the Club Amhránaíochta Phárais, (the Irish-language singing club in Paris, a sub-club of An Ghaeltacht-sur-Seine). Last year this event was a picnic, however, the date and location have yet to be confirmed, and will depend upon the weather – which in Paris is, unfortunately, a bit Irish at the moment!

To receive the An Ghaeltacht-sur-Seine newsletter, you can fill out the online form on their website to be added to their mailing list. For people living in Paris, there is also a Club Leabhar (Irish-language book club), also contactable via the website.

When Irish people get together, music and singing often become part of the equation, and Club Amhránaíochta Phárais was founded in 2015 by Caoimhín Ó Conaill. At the Corcorans get-together, I was sitting beside Stiofáinín Nic Cárthaigh who has been coordinating the singing sessions since they went online on Saint Patrick’s Day in 2020, the date of the first French lockdown.

Nic Cárthaigh moved to Paris in 2001, and like all the other people I met at the event, was very welcoming and encouraging. She maintains that “every Irish person – indeed, every human being – has at least one song in them”, and she added that “singing in Irish is a fun way of learning or improving your Irish, and it’s a great way to socialise in the language. Since lockdown, our online sessions have been a lifeline”.

“People are often wary of joining Irish-language groups, because they are shy about their level, or they fear they’ve lost what they had”, said Nic Cárthaigh, but she explained that “with An Ghaeltacht-sur-Seine, everyone is welcome, irrespective of ability or experience. All you need is an interest in the language and culture, and in the case of Club Amhránaíochta, an interest in singing in Irish”.

There was a family feeling around the table at Corcoran’s, people who look out for each other and who look after each other. Irish visiting Paris can attend An Ghaeltacht-sur-Seine and Club Amhránaíochta physical events. However, the great news is that as Club Amhránaíochta is still online via Zoom, ye can all join in from abroad to sing in Irish!

Since going online, Club Amhránaíochta has linked up with other traditional singing circles around the world. People are beaming into Paris from Scotland, England, Brussels, Luxembourg – and Ireland of course! They’ve even welcomed an enthusiastic Irish learner from the USA who joined via mobile phone, while he and his wife were driving through the Nevada Desert!

At the Club Amhránaíochta Zoom sessions, it’s a small enough group, so they have time for a bit of chat between songs, and they also include some poetry and storytelling, given the diverse interests within the group. “So it’s very organic, as well as being centred around singing in Irish”, Nic Cárthaigh explained.

Club Amhránaíochta Phárais usually meets physically in Patrick’s - Le Ballon Vert, an Irish pub near Nation, on the first Monday of every month, but they went weekly once they went online, via Zoom, every Monday night from 9 pm (Paris Time) onwards. Timekeeping is casual – people can come and go as they please.

When singing in the pub becomes possible again, they’ll go back to meeting up on the first  Monday of every month, but will also maintain an online session on the third Monday of every month, to keep in contact with everyone from overseas. The wonderful connections and friendships that were made through Irish and through singing in Irish, was an unexpected gift of online living.

The theme on Monday the 2nd of August is ‘Ba’ (Cows)! The newsletter and link will be going out shortly to their mailing list. They don’t have a themed session every week, and people are welcome to sing any song, in Irish, during the course of the evening. Previous themes have included: Uisce (Water), Taisteal (Travel), Réabhlóid (Revolution), Grá (Love), Eisimirce (Emigration), Dóchas (Hope), Codladh (Sleep – they had a Zoom pyjama party!), Nollaig (Christmas), An Fharraige (The Sea), Aisling (Vision), etc.

Over the course of the wonderful evening at Corcoran's Sacré-Coeur, I found a “cúpla focal” were coming back – to my surprise and delight they were still in there, buried under the many years of Irish abstinence!