With so many men being sought by the Royal Irish Constabulary, Black and Tans, and British Army, the vulnerable Volunteers began banding together. 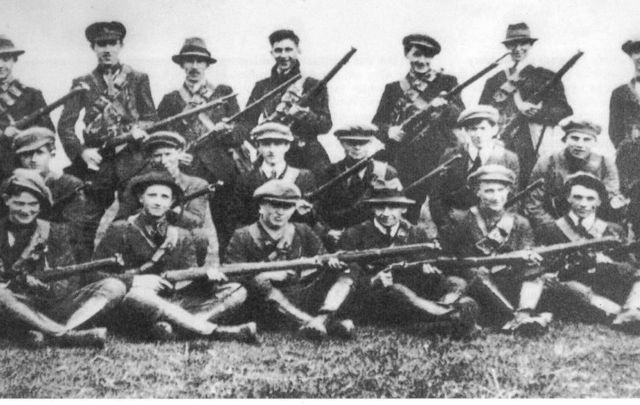 An excerpt from Echoes of Their Footsteps, Volume I:  The Quest for Irish Freedom by Kathleen Hegarty Thorne

By July 1920, Crown Forces were flooding the country. Volunteers who were known to the authorities risked life and limb to stay at home or to congregate in familiar places.

With so many men being sought by the Royal Irish Constabulary, Black and Tans, and British Army, the vulnerable Volunteers began banding together. Soon official Flying Columns were formed:

The Cork No.2 Brigade Flying Column, formed at Mourneabbey, 7 August (“The only British Military Barracks captured by the IRA was at Mallow,” The Kerryman, 11 April 1964, p. 6)

East-Limerick Brigade was reorganised by Ernie O’Malley and Sean Wall. Members of a single Brigade Column were selected from all six Battalions, September 1920 (The War of Independence in Limerick 1912−1921 by Thomas Toomey, p. 425)

Donegal had a fulltime Flying Column by January 1921 that was led by Peadar O’Donnell (Donegal and the Civil War by Liam O Duibhir, pp. 24−25)

West Mayo Brigade, including Westport, Castlebar, and Newport Columns, amalgamated in the spring of 1921 (Raids and Rallies by Ernie O’Malley, p. 160)

When these Flying Columns were based in a particular area, it was not uncommon for the local IRA to act as scouts and security guards and provide them with food and clothing when necessary.

Roving bands of Volunteers was a game-changer in the strategies of the Irish War of Independence. Face-to-face military confrontations on open battlefields were deemed a fool's errand. Hit and run became the order of the day. Members of Flying Columns waited in ambush, robbed trains of British supplies, attacked the nearby military barracks to obtain badly-needed guns, raided the mails to determine who was secretly communicating with Dublin Castle, and, most important, provided a moving target that was difficult for battalions of enemy soldiers to track and contain.

Quote: "I stuck my sandwiches in one pocket of my coat, the bullets in the other, and my rifle down my pants, got on my bicycle and went off to declare war on the British Empire. And you know what? In the end, we beat 'em."