Republican Courts during the Irish War of Independence

What exactly were Republican Courts and Police? What were their duties and from whom did they receive their authority? 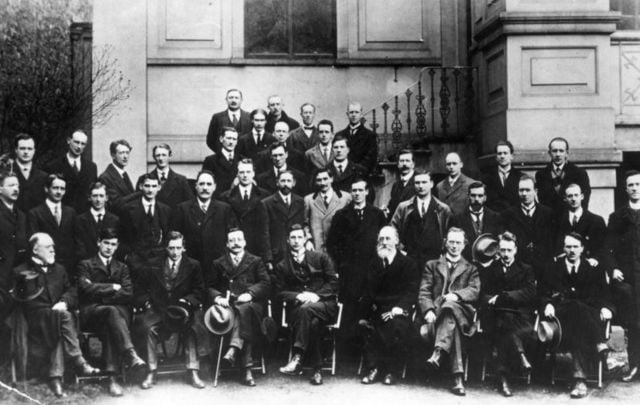 What exactly were Republican Courts and Police? What were their duties and from whom did they receive their authority?

In order to replace the British agents of control, Republican Courts and police were set up by the Dáil. Courts were set up on the parish as well as the district level. Parish courts considered minor cases while appeals from the parish level ended up in district courts. The jurisdiction of the district court was far broader. "They could hear reasonably substantial damage claims (up to £100) and adjudicate in land title disputes, trade union rights and claims for compensation by workmen."[i]

Court sessions were held in abandoned or even occupied houses. "No lengthy or legal technicalities were indulged in and the litigants seemed satisfied with the settlement of their differences, just as well as if some English judge with a wig and an impressive show of jurisprudence had done the job."[ii]

Volunteers acted as summons servers and court clerks. Oftentimes the man appointed Judge was not a man of classical Latin scholarship but a person abundantly supplied with good common sense. He may not have been a Volunteer but a member of Sinn Féin who heard evidence to determine the guilt or innocence of men/women brought before him. "When things became hot, these courts really became military courts, as the civilian Sinn Féin judges and other personnel became inactive and the Volunteers had perforce to carry on." Implementation of the sentencing, however, fell to the Police.

After the burning of the smaller barracks on Easter weekend 1920, the job of policing the territory fell to the Volunteers. According to Jim Quigley, O/C of the 2nd Battalion South Roscommon, "the duty of policing the county now developed on the Volunteers and this entailed an enormous amount of work. Prisoners arrested by them had to be kept in temporary jails which came to be known as "Unknown destinations," so called because the public or the British authorities did not know their location. Unknown destinations were generally unused houses or outoffices belonging to some house. In the 2nd Battalion South area, a building in Cloverhill was used while in the 2nd Battalion North area, the prisoners were kept at Killacolgher.

In the Boyle area, Knockarush, nicknamed "Brixton", was used as a place of detention. Southward in the county, guilty parties were kept in a house in Clonown and in the Sinn Féin Hall in Summerhill.[iv] Constant guards both on the prisoners and the places had to be maintained while they were in use.[v] Food had to be collected from local farmers, and, at times, bought with Volunteer funds.[vi] Prisoners were moved frequently, according to Jim Dorr, O/C of the 5th Battalion North, "so that they could not get to know their whereabouts or the men who were dealing with them."[vii]

The police were also responsible for guarding the court sessions and afterwards for carrying out the prescribed sentences, which at times included warnings to instantly abandon the area, a fine, or confinement for a designated arrest period. At other times the sentences were more severe. A Brigade police officer was to control all police actions in his Brigade area.

An example of the seriousness with which these verdicts were taken can be cited in the Coosan area. Two men were tried and convicted of robbery. Their sentence included deportation to Scotland for five years "and they did not return till the five years were up."[viii] Another example that exemplifies the fairness of these homemade courts can be found in the 3rd Battalion North Roscommon area. Two cousins were disputing the division of a farm. "One wanted the best of the farm as well as a right of way through the half he proposed the other man should get. The decision of the court was that he should divide the farm as he thought it should be divided and then give his cousin choice of which half he would take."[ix]

David Daly, of Faheran, Moate, describes the workings of the Courts in the Athlone vicinity: "Some big land disputes were dealt with by the Courts in this area, and the litigants in such cases had to deposit large sums of money before the cases were heard as a guarantee that they would abide by the decisions of the Court. In all cases, the decision of the Courts was carried out to the full. The Courts were inexpensive and easily accessible to the people and 'red tape' was cut out completely."[x]

Procedure for arrests was outlined in a 3 March 1920 communiqué from GHQ. If an arrest takes place, report to the Battalion Police Officer in the area of arrest (report on such form as attached below.) If the Battalion Police Officer agrees to the arrest, he shall sign the committal form marked B addressed to the Committee Officer at the Prison Centre. The prisoner must then be escorted to "jail" whereupon the arresting officer submits the form to the accepting officer.[xi]

Another procedure followed by the Volunteers was one of trial by jury. When a non-sympathiser (or spy) was suspected of foul play, a trial was held and members of a particular Company along with their commanding officer(s) would hear evidence and pronounce judgment. The local Republican police were responsible for carrying out the sentence.

Each area had designated policemen who arrested and guarded prisoners. Sometimes they watched over persons from other areas of the county. On one specific occasion, a person who had been tried and convicted of shooting and wounding a Volunteer in the Knockcroghery area was transported to Cloverhill in the 2nd Battalion area and guarded for several weeks before being returned to his family. He was also fined for his indiscretion---a fine collected by the Republican police in Knockcroghery.

The first mention of operative Republican Police was made in the bye-election of 1917[xii] in north Roscommon. There was little press about them in public papers until 1920. The General Order of May 1920 first proclaimed them to be the appropriate instrument to deal with civil matters.[xiii]

In South Roscommon, Ned Hegarty of Ballinaheglish was appointed Chief of this force. In the north of the county, Hugh Keegan of Lackin, J. Tanner, [xiv] and James Turbitt of Boyle served in this position.