Covid pups - has Ireland lost the run of itself?

It seems like half of Ireland got dogs during Covid have they lost the run of themselves!? 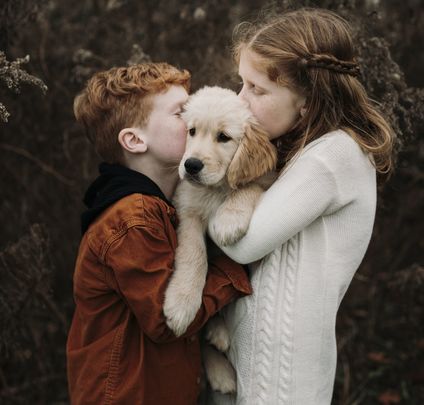 The wisdom of dogs: "He’s a reminder that life is now.  It’s this moment." Getty

A huge amount of people in Ireland got dogs over the pandemic and this countrywoman wouldn't believe how spoiled the family dog was but then she witness how much they all got in return from their new furry friend.

Get a hold of yourself, I want to say to my brother. He’s just a dog. But you can’t say that to a dog person.

We used to be allies. We were both raised on a farm in County Galway, where sheepdogs were considered employees, not pets. Our collie, Brandy, slept in the boot room at the back door, waiting for my father’s commands.

Still, there my brother stands in a park in Churchtown, debating the merits of dog shampoos with a posh old bird in a wax jacket and a Burberry scarf.

He’s not the only one who’s lost the run of himself. Half the country got pups during Covid.  Friends who used to recoil at poo bags (and dog hairs on hoodies) are now gleefully throwing sticks up hills; nattering about kibble and house training and whether the pink bows at the groomers are worth the splurge.

I’m a guest at my brother’s house for two whole weeks, so every day I witness the delirium when they see each other - the racing around the back garden with balls, the way my brother cradles him like an infant at night by the fire.   I ponder the obsession over dinner as Jake rests his silky head on my lap.

Working dogs I understand - they have real jobs. To watch a sheepdog round up a herd of sheep is something akin to magic. The cocked ears,  the watchfulness, the careful pacing so as not to scatter the flock; a dog who can read different whistled commands deserves respect.   But what about this little eejit on my lap? What’s his role?

At first glance, it seems that he’s just an annoyance. He needs to be fed.  He needs to be walked.  He’s an absolute pest in the kitchen. He digs his nose into the blueberries, gobbling mouthfuls before my brother’s swift hand pulls him away.   Still, though, it's fascinating how the kids react.

“Maybe we should get him his own punnet,” says the eldest, grabbing a marker and adding two punnets of blueberries to the shopping list on the fridge.

Together they clear up the mess, the littlest one popping dog-licked blueberries in his mouth.  They’re cleaning up with no complaints; somehow the dog has pulled them together.

When Jake jumps up on the table for a slice of unattended Brennan's bread, my sister-in-law whacks him on the head with a tea towel.  “Ya pup,” she says, shoving him into his crate.

“Mam, he didn’t mean it.  He won't do it again.”  The kids look at his mournful eyes through the metal bars.   He’s a reminder that there are consequences for bad behavior.

Every night of my stay, we sit in front of the flickering tv.  The dog’s handsome head rests in the crook of my brother’s arm; the long floppy ears twitching.  I find myself unexpectedly soothed, watching the dog’s chest rise and fall with contentment.  The corners of my mouth curl as his legs move in his sleep - he’s dreaming of running.  The fire sparks as a log drops in the embers, the flames licking the bark.

Usually, we’re silent - glued to the screen - but tonight the viewing is mediocre.  My brother points to the dog’s head and mouths to his wife ‘Is he asleep?’ He catches my eye and smirks.  He’s only joking.  It’s a nod to the many hours he and his wife spent trying to get teething babies and fussing toddlers to nap.

‘Oh for God’s sake.’  She covers her face with her hand, but I still see her smile.

They exchange a look.   They’re remembering working as a team.

It’s a tiny, but a meaningful moment.

The next day, my nephew has a rough transition going back to school after a week off. His little forehead is creased with concern.  Jake bounds over to him, his tail wagging extravagantly.  My nephew’s scowl dissolves as the dog’s long, wet tongue licks his face.  He rubs his sticky cheek.  “Oh Jakey, you scamp,” he says, laughing and wraps his arms around the dog’s neck.  It’s another moment.

At the end of the week, my niece is disappointed when her teacher doesn’t notice how hard she’s been working on her handwriting.  Jake ambles over to her and lays on his back, exposing his soft underbelly.  “It’s okay,” she says, patting his tummy.  “Maybe next week.”

The energy in the house is changing as the moments add up.  The tension dissipates; petty arguments are forgotten as Jake thumps his tail on the hard wooden floors.  He’s a reminder that life is now.  It’s this moment.  Jake is not mulling over the driver that cut him off, or the teacher that didn’t appreciate the extra work.

His joy is now.

This whole time I’ve been trying to figure out Jake’s role in the family.  He’s not a working dog.   He’s not winning any prizes at Crufts.   But, still he’s doing something; he’s looking after his pack.  He’s offering them comfort,  reminding them what’s important in life - connection, togetherness, family.

On my last day,  I sit with Jake on the sofa.  He’s suddenly alert, yelping in delight minutes before the family car appears in the driveway.  As the car doors thwomp shut, I start unlatching the bolt on the front door and hold his collar. The kids are bickering - it’s been a long day at school.  They see Jake behind the glass.  “Open the door,” they plead.  “He can’t wait to see us.’

Jake almost pulls my arm out of its socket, rushing from one child to the next, his tail wagging as he accepts pats and rubs.  They drop their backpacks on the floor, school day forgotten.  Over homework, they munch their snacks and sneak glances at Jake.  His soulful eyes move from child to child, his eyebrows lifting when he sees me watching; I can almost see him smile.   He walks over to me, tail wagging.  I'm part of his pack now.   He exhales a deep satisfied sigh.

I suddenly notice that my socks feel damp.

The littlest one giggles. “I think Jake peed on the floor.”

* Marlene May is originally from Ballinalsoe, Co. Galway, Ireland.  She currently lives in Millburn, New Jersey with her husband, three teenage daughters and her dog Trixie.