My Lenten Odyssey - Masses in 46 different churches in Ireland

Michael O'Dowd reflects on traversing six counties in Ireland for his "lenten odyssey" in the 40 days leading up to Easter Sunday. 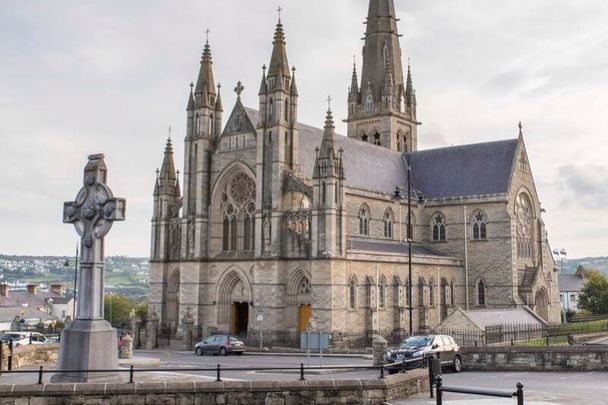 On Easter Sunday when I attended Mass in my local church, I had traveled thousands of miles across six different counties all for the purpose of attending a Mass in a different church each day during Lent. That’s 46 different churches in as many days.

The motivation for this modern-day pilgrimage came during Lent 2021 when freedom to worship was curtailed by the Irish government and the only services available were those live-streamed on the web.

I made a promise to myself that in 2022, I would attend as many different churches as I could. My resolve to carry this out was stiffened by a bout of Covid in February which had me confined to a single room for over 10 days.

So, from a mixture of religious observance, disillusionment at government decisions, and being stir crazy, this Lenten odyssey began.

It has been an inspiring journey, thanks to the liturgy, the clergy that have officiated but, more importantly, the congregations that make up the church as we know it.

During the past month across counties Louth, Meath, Dublin, Cavan, Monaghan, and Donegal, I experienced first-hand the vital role that local communities play in the day-to-day life of the parishes and dioceses. At a time when Catholicism still operates under a cloud caused by past abuse, it will, I believe, be the lay members of the church that will pull it up by its bootstraps and lead it to a better future.

Apart from generosity of time given, I also observed generosity in terms of money. During a collection for Ukraine, I saw elderly women dipping deep into their handbags, and presumably their savings, to give €50 notes to this cause. A case of the widow's mite which contributed to an impressive €3.5 million which was collected at Masses throughout Ireland.

There was, though, a discernible difference in the congregations as I traveled north. They were larger in number there, more representative of all ages, and more involved the further I ventured into Ulster. In truth, a Saturday morning in St. Eunan’s Cathedral in Letterkenny was quite remarkable as prayers were responded to in unison, making it impossible to identify single voices as the large congregation spoke and sang with one voice.

My project has not been without its hiccups. Early on, a no-show by a priest for an evening Mass nearly scuppered the whole thing and led to a dash across Co Louth to attend the last mass of the day at 8 pm way out on the Cooley Peninsula, close to President Biden’s ancestral homeplace.

On another occasion, having left home in Drogheda at 6:30 am for Blackrock College in Dublin, I set what I believed was the correct destination in my navigator only to end up at 8 am at Blackrock College Rugby Club. While the distance from the club to the school is relatively short, with early morning rush hour traffic in the middle of Dublin's busiest suburbs I arrived hopelessly late. However, I was determined to attend mass there, and the following day, arrived with plenty of time to spare.

What was so special to me about the college was that during lockdown, the 8:15 broadcast from the school with Father Paddy Dundon was a real lifeline. Father Paddy, with clear mobility issues as he has to sit during the service, commands the screen with sincerity, dignity, and wisdom.

It was a pleasure for me to have a chat with him about his time as a missionary in Brazil and the development of basic Christian communities in South America in the 1970s. An experiment in Christian living that sadly was discouraged by Pope John Paul II. Father Paddy’s Mass is worth tuning into.

The other priests I came across were an eclectic bunch. From the extroverts who were very comfortable leading the congregation in the hymn singing, to those that were more reserved and, eyes down, read a gospel reflection from prepared notes, to the mesmeric prayerful chants of the Cistercian Monks in New Mellifont in Co Louth.

In general, a priest’s task is a tough one and their work ethic, particularly at weekends with up to three or four masses to officiate, is commendable. As a group, they have endured serious reputational damage from the sins and terrible crimes of their miscreant colleagues. However, through their commitment to a safer church and their daily expression of their faith, they have earned the respect and support of the faithful.

One thing that was missing was female voices from the altar. However, an exception to that were two fifth-year students from the Loreto College in Balbriggan who, in the local church, told us about the Ember Team in their school and how their faith is guiding them to a life that “makes a difference” as well as developing the faith of the school community. Following their presentation, they received a richly deserved round of applause.

It was also evident how intertwined religion is in the lives of the faith community. In some parishes, First Communion students attended early morning mass as did Confirmation candidates.

Prayers for the faithful regularly included local, as well as international, issues of concern, while in Butlersbridge in Cavan, I was refused, politely it must be said, a ballot paper for the parish council.

For those who say that we are a church for the elderly, well, they did not witness the blessing and commissioning of over 50 eucharistic ministers in Carrickmacross, a group that spanned all ages.

However, not everything went to plan for the clergy, and the look of consternation on the young priest’s face on Holy Thursday when he realized that he didn’t have 12 people for the washing of the feet ceremony was priceless. A frantic search for a willing volunteer took place within the church. Thankfully, my averted eyes ensured I wasn’t embarrassed into showing off my rather pathetic socks, and after 10 refusals, an elderly gentleman was eventually pressganged into obliging.

Easter Sunday Mass in St. Peter’s Church in Drogheda was a poignant one for personal reasons. A good friend of over 30 years, Jimmy Weldon, had passed away suddenly during Holy Week and the service, the hymns, and the message of Easter gave hope of a time when we would meet again.

I assume most people are like me, attending the same church, indeed the same Mass, week in and week out. I now realize that this is a missed opportunity and that there is a rich and varied expression of people's beliefs out there.

Roman Catholicism in Ireland is no longer a church of obligation. Rather, it is one of choice and voluntary attendance, and is all the better for it.