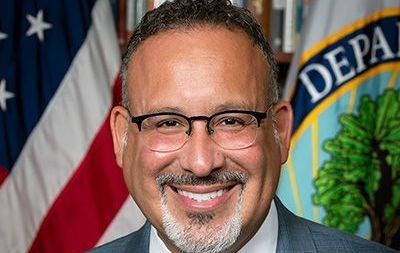 The Ancient Order of Hibernians, Division 1, had held an annual St. Patrick's Day Parade in Meriden, Connecticut, USA for 46 years until the pandemic struck.

Meriden, like most of the world, saw everyday life, solemn rituals, and celebrations put on hold as we collectively faced the challenges of the deadly virus.  Consequently, no parades were held in 2020 and 2021.

But 2022 offered a welcome opportunity to revive this beloved Irish parade tradition.

Unfortunately, the host AOH division was beset with financial challenges and found itself unable to raise the funds necessary to pay the expenses for a parade.  The AOH announced with regret that the 2022 Meriden AOH St. Patrick's Day Parade was canceled.

And then magic happened.

Almost immediately after the cancellation announcement, I received an early morning phone call with an offer of help.  The caller was Meriden's own Dr. Miguel Cardona, U.S. Secretary of Education.  Sec. Cardona, along with his wife Marissa, offered to lead a fundraising campaign for the parade.  "Celebrating Meriden's beautiful diversity is too important not to do something," Cardona wrote in a Facebook post.  "The last two years robbed us of too much.  Part of our healing is coming together."

While the AOH has been in Meriden since the 1800s, Sec. Cardona is the son of Puerto Rican immigrants who moved to Meriden as children.  Cardona's parents, Hector and Sarah, are very active in the Puerto Rican cultural scene.  Hector is a retired police officer who served as a liaison between the Puerto Rican community and the police department.  (Hector and I met at St. Rose School as kids.) Sec. Cardona grew up speaking Spanish as his first language.  He struggled to learn English when starting kindergarten.  Yet Cardona grew up to be a teacher, principal, school administrator, Connecticut Commissioner of Education, and now U.S. Secretary of Education.

In less than a week, the fundraising effort led by the Cardona family was a success. Individuals from all walks of life and backgrounds, along with businesses, answered the call for funding help.  One of the largest single parade contributions came from the Meriden Puerto Rican Festival Committee through the efforts of Hector Cardona.

I grew up in Meriden.  The ethnic, racial, and socioeconomic diversity of this city taught me lifelong lessons of understanding, hope, and pride.  It continues to do so.