The Vatican recently ruled that unions between same-sex people cannot be blessed. 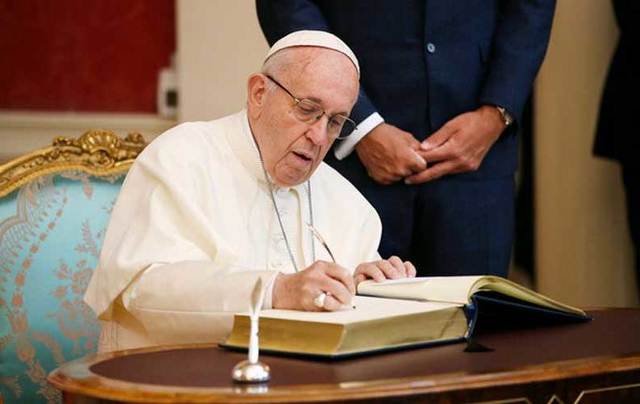 A few weeks ago, the Congregation for the Doctrine of Faith (CDF) in the Vatican issued a universal edict refusing a church blessing for homosexual partners as part of the wedding ceremony.

*Editor's Note: This column first appeared in the April 7 edition of the Irish Voice newspaper, sister publication to IrishCentral.

Their stated reasoning for this blanket rejection focuses on the alleged sinfulness of gay sexual intimacy which the Vatican statement claims God could never bless.

Early in his pontificate, on the plane back from a successful trip to Brazil, Pope Francis responded to a question about homosexuality by asking, “Who am I to judge?” He wondered why he should condemn a gay person of goodwill doing his or her best to live a decent life.

This is hardly a controversial statement; it would win approval in almost any company. However, the Catholic Church maintains a different perspective.

Francis’ predecessor, Benedict, described the homosexual lifestyle as “objectively disordered,” and before him, John Paul II denounced the intimate behavior of same-sex couples as “against the natural law.” It is this response to queer relationships that underpins the CDF statement.

The National Catholic Reporter, a prominent Catholic newspaper, gives front-page coverage to a committed Catholic couple who wanted a priest’s blessing of their union on their wedding day. A friendly priest from the LGBT community performed the ceremony – in an Episcopalian church.

According to the gospels, Jesus never even addressed this issue, and in focusing on his message of love and compassion he had very little to say about proscribing any sexual behavior.

The Catholic Church has definitely not followed his example in this regard.

While not deviating from the ideal high ground of a chaste lifestyle, Francis promised a more pastoral approach to homosexuals. When he was archbishop of Buenos Aires, he supported civil unions where the state recognizes gay marriage as legal – a position that he has also advocated as pope, highlighting every person’s need for a supportive family.

While dealing only with civil arrangements, this thinking drew a lot of criticism from the strong traditionalist wing of the Catholic Church, especially in America. They reminded Francis of the core Catholic teaching that all sexual activity must be confined to marriage and procreation.

No pre-marital sex, no contraceptives allowed, and certainly same-sex lovemaking is completely anathema. The Catholic teaching on marriage is succinct: one man, one woman, one time!

This attitude to sexuality broadly fitted in with the wider culture until the 1960s. Since then, there has been a transformation in the thinking about what is permitted and appropriate between consenting adults. The easy availability of contraceptives drastically altered the behavior of dating couples, gay and straight.

It is no longer acceptable in Western culture to demean people because of their sexual proclivity. And Vatican statements, including the recent one from the CDF, always advise that homosexuals should be respected and treated with dignity.

Many gays cast a cold eye on this pronouncement, asking how can an institution that views their lifestyle as disordered and unnatural be sincere in wishing them well and offering them pastoral counseling.

It is instructive to consider the changing perspectives on homosexuality through the lens of the American Psychiatric Association (APA).  They considered it a mental disorder until their 1973 annual convention when a slight majority of the psychiatrists voted to remove this negative designation.

Instead, their Diagnostic Manual of Disorders (DSM) named it as an “orientation disturbance,” a halfway effort aimed to include both sides in the APA. It wasn’t until 1987 that all negative connotations to being queer were removed completely from the DSM.

Cardinal Newman, the great 19th-century thinker and convert to Catholicism, warned that human knowledge of God and ethical issues can never be frozen in time and that church teaching must always be dynamic, open to new insights in response to advances in scientific knowledge and human experience.

Change, moving from past positions, has always been a challenge for big organizations and that certainly applies to the Catholic Church. Popes tend to show unwarranted deference to the teaching of their predecessors.

Paul VI, agonizing over the issue of contraceptive use in the late sixties, felt he could not go against the teaching of Pius X1 in his encyclical Casti Connubi (Latin: Of Chaste Wedlock) published in 1930. Pius was asserting traditional values in the area of sexuality against the liberalizing statement in the same year by the Anglican leadership at their Lambeth Conference, which allowed the use of contraceptives by married couples in limited circumstances.

Anyway, Paul went against the advice of a clear majority of his advisory commission, mainly because he felt that deviating from his predecessor would damage papal credibility. His encyclical Humanae Vitae (Latin: Of Human Life), published in 1968, remains true to Casti Connubi and disallows the use of condoms or the contraceptive pill even by married couples. The overwhelming majority of Catholics disregard this papal ordinance with, ironically, serious damage to the credibility that Paul sought to enhance.

More recently, Francis replied to the important question of ordaining women by stating that his predecessor John Paul II already ruled that out, without sharing his own opinion. Interestingly, it is a central issue on the agenda of the German church in their important ongoing synod, and they are likely to recommend change in this discipline. If other national and regional synods take a similar stand, Rome may not be able to staunch the forces of modernity.

At present, any priest or bishop participating in a female ordination is subject to excommunication. Tough luck on the many women who feel called to priestly service.

These ecclesiastical regulations reflect the cultural beliefs of other times. The Vatican is finding it very challenging to update and restate its belief system, especially in the light of positive advances in popular perceptions and scientific insights about the gay lifestyle.

Christians call on the spirit that pervades the universe, the spiritus mundi, for guidance. Catholic theologians in the Second Vatican Council (1962-1964) stressed the importance of what they called the sensus fidelium, the beliefs of the people in the pews, in gradually developing an understanding of controversial issues.

The men in the Vatican pay occasional lip service to this concept, but in reality, they want to keep power for themselves and they have been really successful in this regard. The lay community, non-clerics, have virtually no say in deciding church teaching about the queer lifestyle.

Back to the recent CDF pronouncement about blessing gay marriages. The ruling from Rome elicited expressions of dismay in progressive church circles. Cardinal Schonborn of Vienna said that as long as the request for a blessing is genuine and comes from a good heart, “it will not be refused.”

Seven of the ten Austrian bishops have been critical of the Vatican statement, and 200 German theologians questioned a regulation that suggests the exclusion of gay couples from God’s love. And more than 2,000 priests in Germany and Austria promised to continue blessing unions of queer couples with the proper disposition.

In America, Cardinal Tobin in Newark, from the minority progressive wing of the American bishops, proudly welcomes gays to his cathedral and states that the church’s approach to sexuality badly needs rethinking.

Across the Hudson, the large Catholic homosexual community in New York would surely celebrate if Cardinal Dolan showed a similar magnanimity, but he is a leader of old-school thinking. He fully supports the CDF statement and, unfortunately, no priest in his archdiocese can offer a sacerdotal blessing of the marriage of gay parishioners because the CDF in the Vatican has declared that God has ruled it out.