Biden needs a strong message ahead of November midterms

Here is the dismal news facing President Biden and the Democrats. The cost of living has jumped by a whopping eight percent and may well get worse over the next few months. 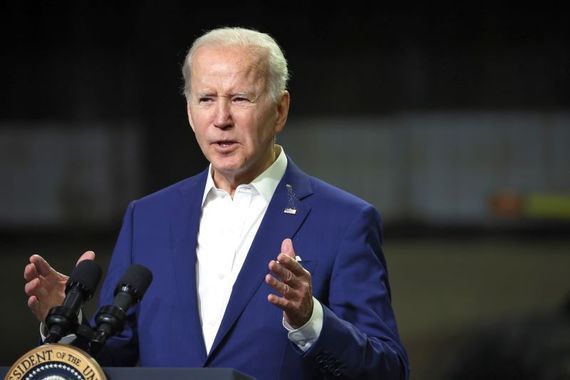 Biden during an address in Iowa in April 2022. Getty

Following the opening presentation by the January 6 Select Committee when the whole country heard from a succession of police officers about how they were grossly maltreated by the rioters, I suggested to a friend, a devout Trumper, that I hoped to hear from Republican leaders expressing their dismay and disgust at the horrible pummeling received by the men and women in blue as they tried to protect the Capitol.

I suggested that if the rioting thugs were black, the outcry from Fox News and the political right would break the sound barrier.

He replied that inflation is the real issue and that most people don’t care that much about the January insurrection. All the polls seem to support my friend’s contention. The old adage that economic factors trump all other considerations in influencing voting preferences still rings true.

Here is the dismal news facing President Biden and the Democrats. The cost of living has jumped by a whopping eight percent and may well get worse over the next few months. A gallon of gas in New York now costs over $5 and people in California and Florida have to pay a few dollars more.

Stock prices are collapsing with Wall Street now officially confirming the arrival of a bear market. The S&P has lost 22 percent of its value since January. Think of the impact of these numbers on millions of Americans whose savings are invested in pension funds with the hope of building a strong nest egg for retirement.

The Fed has hiked interest rates by 0.75% and the experts expect that there will be a further increase in October, a month before the midterm elections. These moves will surely lead to higher mortgage rates and increased monthly car purchase payments, as well as bigger student loan bills. Biden’s recent assessment that “it is not inevitable” that the country will flip into recession hardly buoys his supporters.

If the vibrancy of the economy as measured by inflation figures determines elections, then the Democrats are facing a disastrous November. It seems now almost inevitable that Congressman Kevin McCarthy, a man with very dubious leadership skills, will take over from the indomitable Nancy Pelosi as House speaker, and Chuck Schumer’s hold on the gavel in the senate also remains shaky.

He needs Raphael Warnock in Georgia and Mark Kelly in Arizona to retain their marginal seats, but with the impressive John Fetterman facing weak opposition in Pennsylvania, Schumer may register an important gain in that state, boosting his chances of retaining his crucial role as leader of the upper house.

The president’s approval rating is veering below 40 percent which, based on the results of previous elections where leaders had similar doldrum scores, points to a real shellacking for the governing party in the mid-term elections.

Biden has a sterling record in many areas. He has rallied the United States and, indeed, all the NATO countries to confront Putin’s invasion of Ukraine – a major achievement. He has cut off oil imports from Russia and imposed other harsh monetary punishments on that country in the hope that these actions will seriously weaken the Russian economy.

The president is trying to force the country to pivot away from the deepening climate crisis by setting ambitious goals for dramatic reductions in carbon emissions. United Nations Secretary-General Antonio Guterres, reviewing the climate crisis, recently talked ominously about “an atlas of human suffering.” An estimated 143 million people will be uprooted from where they live due to weather impacts over the next thirty years.

The Republican Party is bereft of ideas in this area. They didn’t object when then-President Trump in 2017 withdrew the United States from an international agreement, the important Paris Climate Accord. In an interview, he explained that the Chinese created global warming to befuddle Americans. A party denying the reality of a climate crisis while compelling evidence to the contrary accumulates on land and sea is refusing to deal with the biggest issue facing humanity.

Young people especially are organizing in all states, demanding action to combat the deterioration in environmental protection. Some recent polls show that this concern extends to grandparents who are worried about what lies ahead for their children and, especially, their grandchildren.

In the 2020 presidential race, young voters opted overwhelmingly for Biden largely because of this issue. People under 25 will again have a real impact in November, and the great majority will not be in the Republican corner.

Meanwhile, the anti-abortion community is celebrating the end of the Roe v Wade ruling. Polls show that a clear majority of Americans do not want to interfere with a woman’s right to decide whether or not to continue her pregnancy. They are against forcing a woman to have a baby she doesn’t want.

Abortion will continue to be legal in New York and in most of the coastal states. Will Texas women who avail of abortion in, for instance, New Jersey, be subject to criminal prosecution after they return home?

In a recent speech to a Democratic audience, Biden showed some of the populist fire and conviction that has made him a successful politician. He reminded his partisan audience that the super-rich in American society get away with paying just eight percent of their earnings in federal tax while ordinary workers end up parting with twice that figure. And many big companies manipulate the system to get away with paying little or no corporate tax.

The president and other Democratic leaders must be heard repeatedly on why their proposals for a fairer system – including a minimum 15 percent levy on companies – are defeated every time in the Senate where the outdated filibuster rule gives Republicans effective control over all legislation.

The Big Lie remains the major political issue of our time. It operates as a kind of penumbra over all facets of government and public life in the United States.

Donald Trump lost the 2020 presidential race. His lawyers led by Rudy Giuliani presented their case for a fraudulent election in 62 courts and failed to get a full hearing in nearly all these because the judges declared that they didn’t have a case. As a result of this chicanery, Giuliani’s law license was closed out in New York, with Washington likely to impose the same punishment.

The widely-watched January 6 Select Committee has established that Trump was told by nearly all his advisors, as well as by his attorney general Bill Barr, that there is no case for claiming fraudulence in the presidential vote. Still, most Republican leaders continue to declare that Biden is not the real president. These preposterous claims are akin to asserting that the moon is made of ripe tomatoes – and I can believe whatever I like!

Biden meets the Shakespearean description of “a plain, blunt man” low in artifice and pretension. He constantly identifies with the families struggling to better their lot, and he repeatedly lauds the role of trade unions in helping workers get a fair shake.

People like him and respect his family story. He needs to be out front until November proclaiming his message on a fairer tax system and financial support for struggling families.

The wisdom that assigns pre-eminent importance to economic matters cannot be decried, but to what extent does it apply when the leader of one political party openly spurns our democracy and insists that global warming is a chimera dreamt up by vengeful Chinese scientists?

When orange and green couldn’t be seen in Northern Ireland

What kind of legacy will Michael D. Higgins leave as Irish President?