Irish American Catholic priest among six killed during the Korean War suspected of being US spies, now his family are seeking Father James Maginn's road to sainthood. 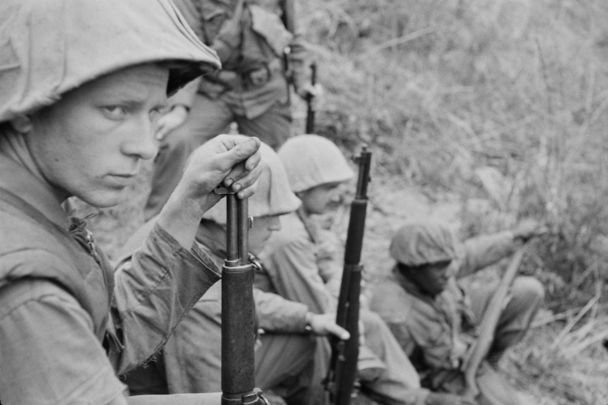 US soldiers during the Korean War. Getty

Irish American Catholic priest among six killed during the Korean War suspected of being US spies, now his family are seeking Father James Maginn's road to sainthood.

Having read with great interest on article on IrishCentral about "American’s most Irish town", I felt compelled to write about my father’s cousin Fr. James Maginn, who was born in Butte Montana, in 1911, and was martyred in Korea, in 1950, with six other Columban priests.

On our visit to Korea in Sept 2018, we visited his parish - Samcheok, a town not unlike our home town, Newcastle in Co Down, with the mountains sweeping down to the sea.

It was wonderful to see, first hand, how the parishioners of Samcheok still revere Fr. Maginn's memory, after all these years. He is prayed for by name in every Mass in the parish church. His photo is in a prominent position in the church and in the parish center, built in his memory, and a bronze bust of him stands in the church grounds.

Fr. James Maginn was born in Butte, Montana on Nov 15, 1911. His parents, James and Annie, had emigrated from County Down. Fr. James was the second of four sons. The family home was in Granite Street, Butte and James went to school at Sisters of Mercy Convent School, Park Street, Butte City.

In 1921, the family returned to County Down, where his father opened a new hotel in Newcastle, at the foot of the Mourne Mountains. The Montana Hotel, incidentally, became a popular meeting place for the American soldiers stationed in this locality during the Second World War.

A young James attended St. Mary’s National School, here in Newcastle, before going off to St Malachy’s College, Antrim Road in Belfast on Sept 3, 1925. In 1929 James began his preparation for priesthood in the Columban seminary in Galway and, after ordination in 1936, he left for the Missions in Korea. He had only one trip home, in 1948, by which time his mother had died.

In 1950, when the Korean war broke out, Fr. James was the pastor in the Parish of Samcheok. Just one month into the war, the Reds invaded the village and Fr Jim was arrested in his church and taken to the police station, where they questioned him for two days. Because he had been born in America, they wanted him to confess that he was an American spy.

After a period of detention, starvation, and torture, they took him barefooted on July 4, 1950, along the rugged mountain road to this swamp, way outside of Samcheok village, and there he was shot. His body lay there until the parishioners eventually found him. They buried him under a tree on a hillside nearby. He was just 38 years old.

A couple of years later, in March 1952, his body was exhumed and reinterred alongside Fr.Patrick Reilly and Fr.Tony Collier behind the Cathedral in Chuncheon.

James Maginn has been referred for Beatification. Please join us in praying for this intention.