At age 12, I left behind everything I knew in Northern Ireland and emigrated to New York

"I worried that the day I would lose my accent would be the day that my identity would be taken away from me. I worried that I wouldn’t be accepted as being Irish anymore when I went home to visit. I worried how much I would assimilate into American culture." 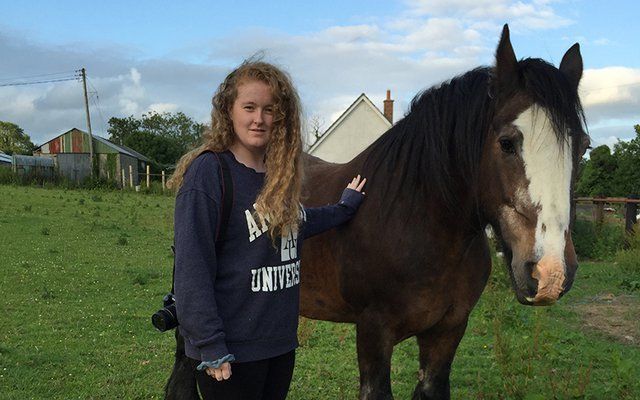 Before the big move to NYC, I lived in a small two-bedroom house in a housing estate in Warrenpoint, Co. Down in Northern Ireland with my mum up until I was 11 years old. Growing up, I saw friends and family moving about from house to house while my mum and I were happy enough in our home. I knew nothing of moving house let alone 3,000 miles away from home.

My journey all began when my mum met a pretty fantastic New Yorker, when I was about 8 years old. They did long distance for a few years and then got married in 2007. They toyed with the idea of living in either Ireland, England, or New York after they married. In 2007, my stepdad started to look for a teaching job in Ireland, but 2007-2008 was the start of the recession, there weren’t any jobs out there.

After long and difficult conversations between my parents on where to move, they decided that the best thing to do would be to immigrate to the U.S. When I first found out about the move to NYC, I didn’t think much of it. In all honesty, I didn’t think it was really going to happen. I was in a whole other world, finishing up my last year in my primary school, Bunscoil an Iuir and watching Disney Channel shows on repeat.

It all started to hit me when we started packing and school was ending. I spent a lot more time with my cousins and grandparents that last summer in Ireland. Moving day is a blur mostly. I remember I went in my grandparent’s car from their house and they drove my mum and me to the bus station where my whole family was waiting to say goodbye.

Read More: Why do some Irish emigrate while others stay behind?

Everything happened very quickly and things got emotional real fast. Thinking about the day makes me tear up just writing it all out. Not only were my mum and I moving that summer, my uncle and his three kids and wife were moving a few weeks after us over to England.

I felt broken and confused about why and how everything was happening so fast. I felt heartbroken that I wouldn’t be able to visit my family when I wanted to. Most of all, I felt jealous that we were moving so far away and that the rest of my family were a lot closer to each other.

Read More: Finding a home away from home in New York's GAA community

Soon after the move, I realized how much I would miss Ireland, the people, the culture, the accents, the laughter, the warmth and the language. I worried day and night for a long time that I would lose my accent. I worried that the day I would lose my accent would be the day that my identity would be taken away from me. I worried that I wouldn’t be accepted as being Irish anymore when I went home to visit. I worried how much I would assimilate into American culture.

I get asked a lot, “How did you handle the move?” “Was it hard?” I understand the desire to comprehend how a 12-year-old manages moving over 3,000 miles away from home. But I don’t think it ever gets easy to move away from your home country. Sure, days and weeks go by that I don’t think about Ireland. But, those days, weeks, months of homesickness come and when they do they tear you apart.

Outside of my old childhood home in Warrenpoint. Photo: Emma Devlin

You feel weak with despair for how much you feel you missed out moving away from everything. You start to feel disconnected to your culture. You question your identity and connection to the country. Most of all you miss your family and how hard it is to navigate the time difference to keep in touch. The thoughts never end or go away, they stay in the back of your mind and make their presence known when you least expect it.

While I can’t say I ever felt like I really got over the heartbreak of leaving Ireland, I can say that I thrived in New York like nobody ever thought possible. I was lucky that my stepdad and his parents did a lot of research finding the perfect school for me to attend once we made the move. I ended up at Institute for Collaborative Education (ICE), where each grade has on average 60 kids, which is a lot less than your average NYC public school grade size.

My new family of three moved into a two bedroom apartment in Queens, from which I commuted to school in Manhattan. My school took me in and gave me the support I never knew I needed. I had teachers and advisors looking out for me. Most importantly, I made some of the most incredible friendships I could have ever asked for. I was able to attend ICE for middle school and high school which provided the stability and comfort I needed after moving to the US.

On a school trip to the ice skating rink in Central Park. Photo: Emma Devlin

When I look back on how I handled the move, I was lucky I had a new stepdad and his entire family who took us in and gave my mum and me an American family. Most of all though, my mum was the rock who listened, reasoned and connected with me and my experience. She is the reason I was able to move away from feeling bad for myself and missing Ireland and family. She taught me to look forward and take any opportunity that came my way. She pushed me to do as much as I could. My mum made the biggest decision of her life choosing to move us to NYC to live with my stepdad. She had to say goodbye to her friends, her job, her family, her house, and her old life. As I get older, I really start to realize just how much harder it is for a mother to make a move like she did. But she did it with ease and incredible strength.

It will be nine years in August since the big move. I’m about to start my junior year at American University in DC. I’ve figured out I’m majoring in Environmental Studies and minoring in Communication. I have an amazing boyfriend from Texas (even more culture for me to explore). I’ve met a whole new set of people at my university and I’m happy to say that I’m Irish as ever. If I could do it without getting weird stares, I’d scream out just how Irish I am and how proud I am being an immigrant. Something that surprised me, though, was just how proud I grew to say I was a New Yorker.

With cousins back in Ireland. Photo: Emma Devlin

Over the past nine years, I’ve grown a large part in my heart for NYC, the place that welcomed me and so many other Irish immigrants. While Ireland will always be the #1 place for me to call home, NYC has become another place I am proud to call home.

As an Irish immigrant from 2008-2017 I never felt attacked or disliked for my immigrant status. However, for so many other immigrants across the world who choose to move to the United States, this is not the case. Their stories of immigrating are told with anger about assumption regarding the legality of their immigrant status.

The assumptions about many immigrants in this country are rooted in hate, anger, racism, and fear.  I hope that one day immigrants, no matter where we come from, are able to thrive and succeed without bigotry and racism to hold back the potential for success. Every story of an immigrant is filled with heartbreak and hope for a new better life. Let’s celebrate the bravery of people who make the daring decision to move themselves and/or their families.

Emma Devlin is interning with IrishCentral for the summer. She also contributes to Spoon University.