Ancient Ireland's Brehon Law and its teachings in restitution and rehabilitation

"The brehon laws reflected this sensible way of thinking, several thousand years ago, when every able-bodied member of a tiny community was necessary to the common good." 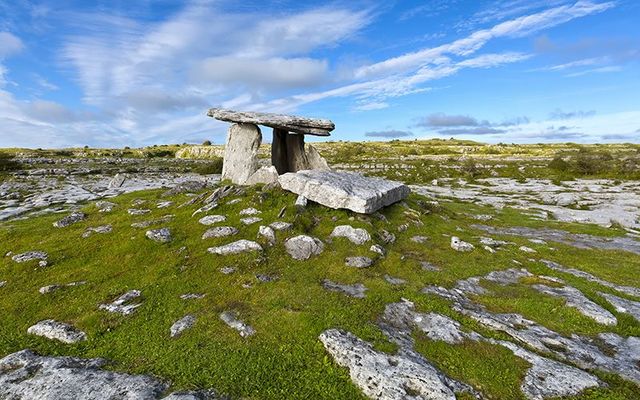 The ancient tomb of Poulnabrone, in The Burren, in County Clare. iStock

The defining characteristic of old Irish law was not in identifying a crime and imposing punishment, but in defining an offense and ensuring restitution and rehabilitation.

Taken from the July / August 2020 issue of Ireland of the Welcomes magazine. Subscribe here.

Editor's note: The following is an extract from "Brehon Laws" by Jo Kerrigan. The book was published by The O’Brien Press. It is available now from all Irish bookshops and on www.obrien.ie.

Our ancestors had a very pragmatic approach to dealing with misbehavior, one that was primarily concerned with restitution to those injured and thereafter, as far as possible, rehabilitation of the criminal. This was very different to the more brutal ‘eye for an eye, tooth for a tooth’ regime found in other countries, where many offenses well below the level of a murder could and did invoke the death penalty, up until very recent times.

Under brehon law, full restitution to those who were wronged was the key issue, and when you look at it, that demonstrates thoughtful and caring sense. After all, taking the most extreme example, if someone kills the head of a household, what earthly good does it do to simply execute the criminal? How does that benefit the grieving wife, the bereaved family, the children left fatherless and penniless? The attraction of ‘an eye for an eye’, unfortunately, is that it satisfies the instinctive and basic desire for revenge, and that is precisely why brehon law pushes firmly in the opposite direction.

Blood feuds were common in ancient times – indeed, they still are today – and the pointlessness of one death after another is familiar to anyone who follows the news. The traditional laws of Ireland recognized and firmly opposed the urge for revenge and continuing feuding. Firstly, full compensation, at least on a material level, was payable to those wronged. On top of that came a fine. If it was as serious as murder or severe injury, the offender could lose everything, and be reduced to the lowest status in his community – virtually a slave, with no legal rights or protection.

The injured party accepted the payment in lieu of retribution or revenge, thus (in theory anyway) returning local society to peace and harmony. How the offender was subsequently treated again marks brehon law as exceptional to that of other countries. Even where a murder was concerned, rather than taking upon themselves the right to recommend precisely the same crime, i.e. killing in return, the brehons saw it as their obligation to offer the offender, by now considerably poorer, a chance to rehabilitate himself. He could work his way slowly back into acceptance, from the bottom up.

You can see how practical this is, both in human and in community terms. It is an idea that the modern world is only gradually coming to accept. The death penalty has now been removed in many countries, usually with long prison sentences imposed instead. The more advanced nations are starting to offer community service rather than prison, since in that way, rather than being a continuing and substantial drain on resources, the offender can at least contribute to the general good and, hopefully, learn something along the way. The brehon laws reflected this sensible way of thinking, several thousand years ago, when every able-bodied member of a tiny community was necessary to the common good. Remember that the brehons, in considering a case and giving judgment, did not impose the penalty.

They simply indicated what it should be, and it was then up to the injured person, his family or the community to apply and enforce it. And this they did. Life was challenging in a small kingdom in ancient Ireland, and everyone depended on good fellowship to survive. The pressure on individual offenders would have been considerable. Ah, but, you are saying, this presumes some regret on the part of the offender. Suppose that good fellowship just wasn’t his thing, and he flatly refused to pay, and would not cooperate with the law? Well, that was provided for too.

In this circumstance, it was up to his family to meet the obligations imposed, something they usually achieved by forcibly taking their reluctant family member’s land and cattle. And yes, in extreme cases, such as that of a consistent and unrepentant offender, he might be put in a boat without oars, and towed ‘beyond the ninth wave’ – that is, beyond the point where the tide would carry him to land again. If, against the odds, he managed to survive and was thrown onto another shore, then the community there had the choice of either enslaving or killing him, as a stranger from outside.

Taken from the July / August 2020 issue of Ireland of the Welcomes magazine. Subscribe here.