Will amnesty be granted to British forces for their crimes during the Troubles?

United Kingdom Prime Minister Theresa May is stepping down without having delivered on Brexit. 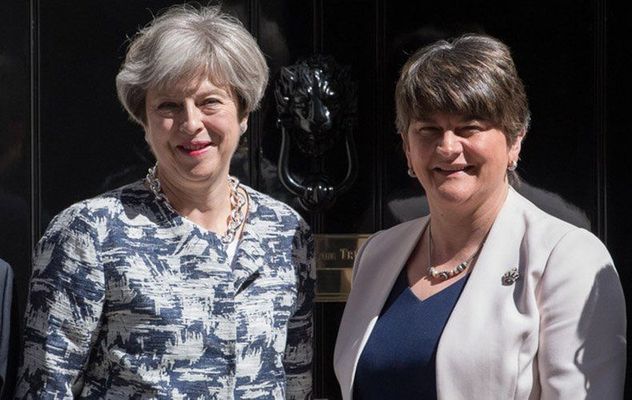 United Kingdom Prime Minister Theresa May is stepping down without having delivered on Brexit.

She said she will devote her remaining time in office addressing other pressing issues. One of them may be how to deal with the legacy of Northern Ireland’s past.

It will be up to another Conservative Prime Minister (PM) to try to deliver on the UK’s 2016 vote to leave the European Union (EU), which has an impact far beyond trade and business transactions.  Critically, once it exits the EU, the UK will no longer have to adhere to the European Convention on Human Rights.

While all eyes will be on politically vexing Brexit negotiations in Parliament, another system fundamental to democratic society will be tested at the same time. That is the rule of law in Northern Ireland. The rule of law embodies the principle that everyone is equal under the law and should, therefore, be treated equally. Since democracy relies on the consent of the governed, it works best when supported by the rule of law.

Justice is indispensable to any rule of law system. And the truth is the essence of justice.

Justice is based on truth. Without it, justice cannot be achieved. Truth must be acknowledged and documented. For decades, justice has been denied to too many relatives of victims of the Troubles, as the truth has been hidden from them and from everyone.

Read more: Shed no tears for Theresa May after her forced resignation as PM

Their yearning to learn why their loved ones were killed and who is responsible has gone unanswered. Before leaving his post, Northern Ireland’s outgoing Chief Constable George Hamilton noted that “members of grieving families are passing away without any resolution, without justice and without answers.”

Part of the legacy of the past is 3,000 unsolved murders. One example is the 1976 Kingsmill massacre in which ten Protestant workers were executed on the side of the road after the minibus in which they were riding was ambushed. A coroner’s inquest into the murders is still underway. The coroner has appealed to people involved to come forward. A brother of one of those killed in the attack has said that the search for justice is so lengthy it is no longer worth pursuing.

The Stormont House Agreement (SHA) was reached among five political parties in Northern Ireland at the end of 2014. The goal of the agreement is to deal with the legacy of the Troubles through legislation in Westminster that would create new institutions to uncover the truth and provide answers about Northern Ireland’s past. Fundamental principles of the agreement include acknowledging and addressing the suffering of victims and survivors and facilitating the pursuit of justice and recovery of information.

It has been a year since a draft bill to implement provisions of the SHA was presented for a public consultation process during which 17,000 responses were received. The draft bill did not include a “statute of limitations” on prosecutions. A statute of limitations is in effect an “amnesty” for crimes committed beyond the time period.

Granting amnesty for certain crimes is contrary to human rights norms. With regard to State-involved killings, it violates obligations imposed by the United Nations to combat “impunity” and by the European Convention on Human Rights to conduct effective, efficient, independent and transparent investigations of killings involving members of security forces.

Nevertheless, with regard to the criminal conduct of British soldiers in Northern Ireland, enactment of a statute of limitations is a strong possibility. During the consultation period, PM May called it “appalling” to drag soldiers through the courts, while treating terrorists more favorably. She asserted, while security forces were responsible for 10 percent of Troubles deaths and terrorists were responsible for 90 percent, security forces account for roughly 30 percent of the legacy investigative workload.

Northern Ireland Victims Commissioner Judith Thomson pointed out that there is no evidence to support an assertion that soldiers are being unfairly targeted. To date, six soldiers who served in Northern Ireland during the Troubles are facing prosecution. One of them, Soldier F, is charged with two of the thirteen murders on Bloody Sunday in 1972 when unarmed civilians were killed in Derry.

Secretary of State for Northern Ireland Karen Bradley similarly complained about “harassment” of soldiers in the judicial process. She went further by saying that killings by security forces, unlike those by terrorists, were not against the law, because members of the security forces “were people acting under orders and under instruction and fulfilling their duty in a dignified and appropriate way.”

Afterward, she retracted the comments and acknowledged that “where there is evidence of wrongdoing it should always be investigated, whoever is responsible.”

Bradley then issued a third statement after meeting with relatives of victims who had been killed by members of the security forces. She apologized for her insensitivity and said she understood their desire “to see justice properly delivered.” Notwithstanding her subsequent comments and apology, her credibility on the issue has been destroyed.

The answer to the question whether Bradley can be trusted to deliver a fair process for dealing with the legacy of the past, a process that recognizes the rights of victims and upholds the rule of law, is a resounding “no.”

It may be left to the next Secretary of State to decide on how the SHA is implemented. But statements of support for soldiers serving as part of Northern Ireland’s security apparatus during the Troubles have opened a Pandora’s Box.

Some Members of Parliament (MPs) say the prosecution of elderly veterans for historical allegations is a “macabre spectacle” and accuse the government of “abandoning” and “betraying” them. These MPs say prosecution is an abrogation of a moral duty to defend veterans, which “scapegoats” them and “panders” to terrorists. They want cases involving soldiers in Northern Ireland to end. Their effort is gaining momentum.

The UK government recently proposed a bill that carries a presumption against bringing criminal proceedings against soldiers for incidents that occurred more than ten years ago in Iraq and Afghanistan. Prosecution after the ten-year period can proceed only on a showing of “exceptional circumstances,” such as compelling new evidence.

British Defense Secretary Penny Mordaunt says ensuring that veterans are not “victims of unfounded allegations” is a “personal priority” for her. She wants to provide stronger legal protections to soldiers who served in Northern Ireland by expanding the proposed bill to apply to Troubles-related incidents.  Northern Ireland’s Democratic Unionist Party supports this position.

If broadened to cover Northern Ireland, the bill would amount to a grant of amnesty to soldiers who committed Troubles-related crimes. If that is done, why would expansion of the law stop there? Would not passage of a soldier amnesty law have the potential to lead to a similar law covering all security forces?

After all, statements of complaint about bringing soldiers before courts by both PM May and Secretary Bradley included references to “security forces.” If the move for expansion gains traction, Sinn Féin will argue strongly for evenhanded application of a ten-year statute of limitations to members of the IRA as well. Any grant of this kind of amnesty will provide further protection than that offered in comfort letters.

In short, evolving issues surrounding granting amnesty to soldiers who committed crimes, absent “exceptional circumstances,” and how that grant can be broadened to cover others raises an essential question: where can relatives of victims go for answers about why their loved ones were killed and who are responsible? From a rule of law perspective, one must ask: How will they receive justice?

Sadly, the answer may be they will not. As individuals, such an outcome undermines their ability to heal. For society, it undermines the rule of law.

Instead of progress toward reconciliation, what remains is resentment and distrust.