Time for Northern Ireland to prioritize the Irish language

Northern Ireland was governed for 100 years by the British government, during which time the Irish language was never taught in state schools. The history and culture surrounding it received short shrift. 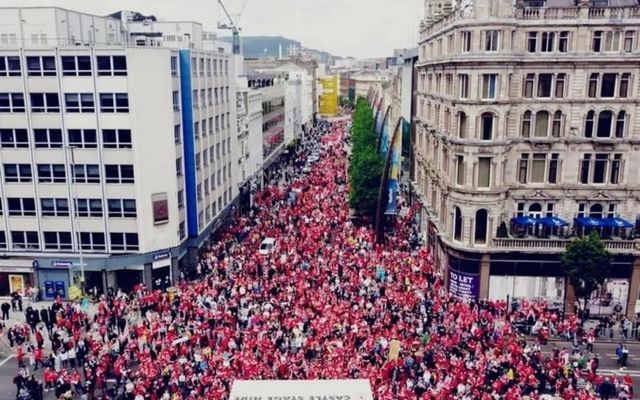 Irish-language protestors gather at Belfast City Hall during a demonstration earlier in May. An Dream Dearg Facebook

Seven thousand Irish-language activists took to the streets of Belfast earlier in May to lobby for the implementation of an Irish language act which has been denied them since it was promised in the Good Friday Agreement nearly 25 years ago.

There are very good grounds for implementing such an act. The Irish language has become a major form of creative expression in Northern Ireland.

The demands from An Dream Dearg, the group that organized the recent march, are modest in the extreme. One must remember that the Welsh and Scots Gaelic languages already have their own guarantees given by the British government that provisions will be made to allow the languages to flourish.

Northern Ireland was governed for 100 years by the British government, during which time the Irish language was never taught in state schools. The history and culture surrounding it received short shrift.

It is past time that was changed, and an Irish language act instituted as an official policy going forward.

The proponents of such an act are not asking for anything extraordinary.  They wish to be able to communicate in Irish with government departments, to use Irish as their everyday language, and to allow politicians to speak it in the Northern Ireland Assembly.

The revival of a language is a massive undertaking.  But we should never forget that Hebrew was extinct for 3,000 years before it was revived by the founders of Israel.

Something profound has changed in Northern Ireland.  Decades of opposition by unionism to the revival of the Irish language, despite the fact that many Protestants are interested in its survival, must end.

As Sinn Féin proved in the recent election, it is a new day in the North. The nationalists are a risen people. They demand as their right the ability to speak the language that their ancestors spoke for thousands of years.

As usual, though, the gormless British government has opposed the effort to introduce an Irish language act that would place no great pressure on the budget of Northern Ireland, which seems to be the main reason for not doing so.

What was fascinating about Saturday’s rally was thousands of people, all wearing red t-shirts, came together in one of the largest demonstrations in recent history in the North.

The support for an Irish language act is not limited to Sinn Féin.  It is also backed by the Irish government, the SDLP, the Alliance Party, and the Green Party.

It is clear what is happening.  Bit by bit the people who were cut off from the rest of Ireland in 1922 when partition happened are now speaking for themselves, and boldly changing the rules that operated in the northern state for 100 years.

The crowds in Belfast on Saturday represent yet another example of the new role of Irish nationalism in Northern Ireland. No longer are the nationalist people prepared to accept empty British promises, or to be daunted by the objections of Ulster unionism.

The very act of speaking Irish is not a threat to anyone.  Rather, it is the return of a native language that was crushed by the Irish Famine, and that will someday be considered as natural a method of communication as English is now.