Nothing stands still.  Now is the time to look at the trends and changes in Ireland and plot a course forward. 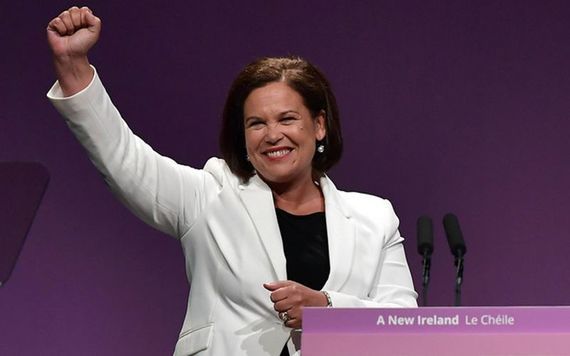 ON the 20th anniversary of the Good Friday Agreement, speaking in the Library of Congress, Senator George Mitchell reminded us that “life is change.”

Nothing stands still.  Now is the time to look at the trends and changes in Ireland and plot a course forward.

Ireland today is changed and is changing. The Good Friday Agreement endorsed by the people in 1998 remains valid and essential.

The principles of the agreement remain a constant in a changing world; the commitment to peaceful and democratic means, respect and equal rights for all, reconciliation, and support for the law. The constitutional future of the island to be determined by the democratic will of the people.

Much has changed since 1998.  Sinn Fein has emerged as the largest party across Ireland. It jointly leads the Assembly and Executive in the North.

Sinn Fein President Mary Lou McDonald is the first woman to lead the official opposition in Dublin.  Citizens in the 26 counties have led progressive change in LBGT rights and women's health.

In the North, the Assembly and government no longer have a unionist majority. It is a chamber and Executive of equals. It is a young, diverse, and progressive society in transition.

Sinn Fein is ahead in the polls, and it is not inconceivable that the party could lead governments north and south.

At the time of the signing of the agreement, working-class unionism/loyalism was a force for peace and challenge to the Democratic Unionist Party (DUP). Hamstrung by feuds and criminality, the loyalist political project failed to build popular support and withered, endorsing the main unionist parties in subsequent elections.

Unionist paramilitaries continue to exist, recruit and remain active.  Their latest project, the Loyalist Community Council, with no mandate or popular support, issues countless statements of condemnation of Irish republicans, the Irish government, other unionists, the British government, America, and the EU. All accompanied by thinly veiled threats of violence.

The Tory government of Boris Johnson is not a trustworthy partner in peace.  It acts like a rogue state with no care for international agreements or law.

Its policies in Ireland are driven by selfish party political interest and a disregard for their own agreements. They set aside truth, justice, and reconciliation to continue a cover-up of the actions of their military during the conflict.

Successive Tory governments have given up any pretense of impartiality, viewed the North as collateral damage in the pursuit of Brexit, courted unionists to remain in power, dropped unionists when expedient, and now play the orange card and threats of unionist violence in their negotiations with the EU.

The old assumption of a perpetual unionist majority no longer holds, a fact that unionism has struggled to accept.

There is a need for a paradigm shift in terms of American and Irish American policy in the peace process. To acknowledge that the agreement was not a settlement, but a process to manage society in transition.

Stability will not come from censuring the future. Irish unity is not only an aspiration -- it is a practical and possible achievement. There will be a unity referendum, and it can be won.

Talk of Irish unity does not create instability.

Instability arises from those who reject the democratic premise of the Good Friday Agreement and the fundamental equality of all citizens.

Instability is created in the blocking of rights of citizens, be they Irish speakers, women, ethnic minorities, or the LGBT community against the will of a majority.

Instability is promoted in elevating active paramilitary groups and their threats of violence.

The continued refusal to implement agreements undermines the primacy of politics and devalues the political process.

Stability will be found in the embrace of the principles of the Good Friday Agreement. Equality and rights. Peaceful and democratic means free from threat. Reconciliation and respect.  In asserting the primacy of the political process over the threats of violence.

All of this calls for a new approach. A paradigm shift in policy.

The constitutional discussion can be a force for stability. Acknowledging and normalizing the discussion is to embrace the diversity of opinion.

Recognition that a majority determines the constitutional future fundamentally changes the political process.  Stability is built on democratic values.

The politics of threat and exclusion will not secure a majority for continued partition of unity and has no place in our society.

America has a role to play in explicating, endorsing, and safeguarding the principles of the Good Friday Agreement.  It can use its position to hold the British government to its agreements. The appointment of a special envoy is an essential safeguard and guarantor of the agreements and the political process.

The U.S. can be clear that the discussion on a continued partition or Irish unity is part of the Good Friday Agreement. To normalize the discussion and to facilitate an informed and respectful debate will not inflame tension but assert the primacy of dialogue.

There is a minority who say now is not the time. Don’t rock the boat.

This short-term expediency undermines the agreement. The boat has set sail.  It is about navigating the way forward.

The Good Friday Agreement remains the mechanism for managing change. To realize its full potential, there is a need to acknowledge that we are in a period of transition. This will require new thinking and new approaches to match the challenges of today and tomorrow.

(Ciaran Quinn is the United States representative for Sinn Fein)