Trump’s fig leaf reason for firing Irish American Comey, stating that he had mishandled the Hillary Clinton affair, is one nobody believes for a second. 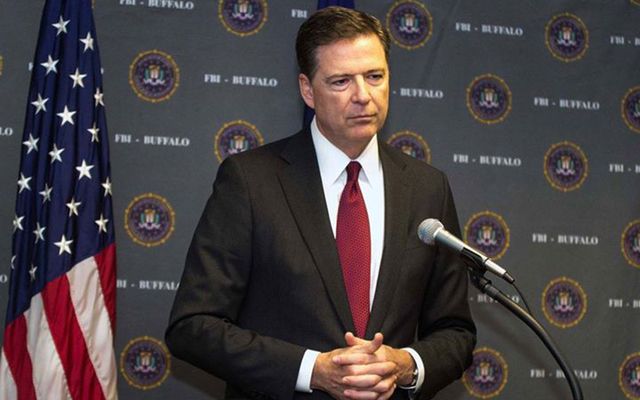 President Donald Trump was right to fire FBI director James Comey, who has hopelessly compromised himself and his agency and blatantly interfered in the 2016 election process despite warnings by the Justice Department to desist.

But Trump’s fig leaf reason for firing Irish American Comey, stating that he had mishandled the Hillary Clinton affair, is not one to believe for a second. It was a level of chutzpah that was unique even for Trump. Stopping the FBI investigation of the Trump/Russian connection in its tracks was the clear intent.

It was hilarious watching GOP supporters on FOX and elsewhere twist themselves like pretzels, saying how wrong the Comey treatment of Clinton was, when just a few months ago they were cheerleading Comey’s investigation of Hillary, as was Trump.

For American justice to function properly the FBI needs to be free of political interference. Can anyone believe that Trump's new FBI director, who will handle the FBI's Russian/Trump connection inquiry, will do so in good faith?

Trump is playing for keeps. Comey got the news when he was talking to a group of FBI employees in Los Angeles. As Comey was speaking, his firing came up on a nearby TV channel. It was the first Comey knew of it. Never in the history of the office has an FBI director been treated with such disdain.

It was a clear message in its humiliating method – don’t mess with the Trump mafia who now run the White House.

What occurred yesterday was a danger to democracy that will also endanger the Trump presidency. It was an attempt to squelch the Russian investigation.

As Michael Beschloss, the political historian noted, during Watergate Nixon tried to shut down the investigation into his own misdeeds. It all rebounded on Nixon who was about to be impeached when he resigned. Trump may be heading in the same direction.

The names of Trump and Nixon are ever more entwined, it seems. It is a disastrous connection for Trump.

The remedy being discussed is a special consul but we saw with Ken Starr, who overreached so dramatically in the Clinton impeachment, how disastrous that can be and Trump may well be able to sideline such a possibility.

It is entirely possible that Trump may get away with firing Comey and covering up whatever the Russian investigation may discover. He has stunned the world by getting elected. He has stunned with his shameless use of the office to enrich himself and his family, so do not be surprised if he can bury the Comey firing too. Trump's line about shooting someone on Fifth Avenue and getting away with it rings truer every day.

James Comey now inhabits the worst of all worlds, with everyone mad at him and nothing to show for his four-plus years except a humiliating boot in the backside from Trump. It seems when it comes to Trump and his desire to avoid investigation, the FBI Director amazingly turned out to be roadkill.

Say what you want about Trump, but he can wield the stiletto very well, as Comey found out.