Trump and his death cult of governors have no shame 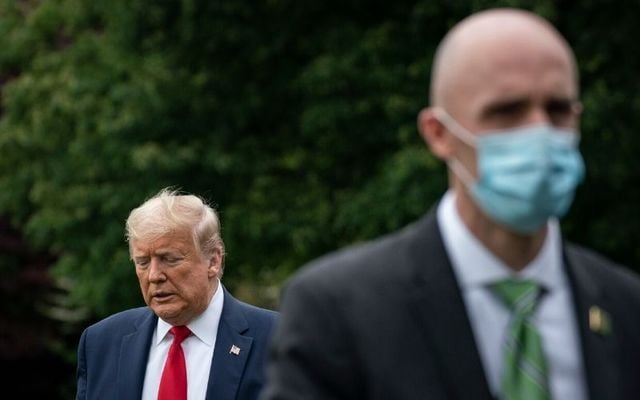 A secret service agent dons a mask while Donald Trump remains maskless. The President has said that he will not order Americans to wear facemasks. Getty

It’s very simple actually, wearing a mask saves lives and protects you and other citizens you encounter.

Think of it as like the law mandating seatbelts. Every time you sit in your car, you are 47 percent less likely to be injured if you are wearing a seatbelt.

Since the first seatbelt law was passed by in 1976 there has been a 50 percent decrease in fatalities.

Forty-nine of the fifty states, bar New Hampshire, have seatbelt laws that save hundreds of thousands of lives every year.

Masks should be mandatory also. They will save countless lives in the battle against the coronavirus. It is a proven fact in countries with a mask culture like South Korea, Singapore, and Taiwan COVID-19 death numbers dropped dramatically.

But some Republican governors and our president are unimpressed with the life-saving realities. They are quite content, it seems, to let people die by their inaction and downright opposition on the issue.

Governors like Brian Kemp of Georgia and Ron DeSantis of Florida have blood on their hands because of their refusal to act in the common good and mandate mask use.

Kemp belongs in a special circle of hell on his own for suing the city of Atlanta for mandating mask use. He must know people will die and many will be infected as a result.

President Trump and his policies, such as pushing states to open prematurely and resisting testing, have ensured tens, perhaps hundreds of thousands will go to their graves because of sheer stupidity and ignorance.

Incredibly, these are the times we live in. No doubt if seat belts were up for state by state votes today we’d hear the sick summary that Americans should be able to choose to die if they want to. To some Republican politicians, dead lives don’t matter.

Such pig ignorance will cost American lives. The death cult of the no mask mandate supported by such political leaders is as reprehensible as carrying out the death penalty on innocent men and women.

I don’t know how Trump, Kemp, De Santis sleep at night. They have failed America at its most need filled moment.