Now they are coming for Saint Mother Teresa! 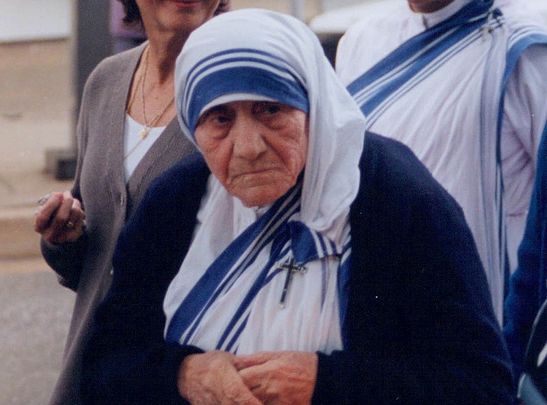 Mother Teresa photographed in 1996, a year before her death. John Mathew Smith / CC

A New York Times article has showcased a new investigative series into the nun who symbolized for millions all that was good and compassionate about the Catholic Church.

The accusation is that her order of nuns acted like a cult, that women who joined were watched every day and extraordinary attempts were made to bar them from the outside world.

We are told that the dreadful conditions in the hospitals she funded caused many deaths rather than saved people, that she preferred to let people suffer in God’s name rather than make life easier for them.

None of the accusations are surprising and have been raised before.  The two most prominent women making them already have written memoirs, and they admit they write not in anger but in puzzlement about their experience.

Mother Teresa, a Macedonian-born nun, died in 1997 and can no longer defend herself.  If the Times was looking for a grand villain they certainly picked a strange target.

I saw her work and her legacy at firsthand in the way her followers helped the hundreds of thousands of hopeless and helpless Indians in Calcutta who were living in the direst of poverty and the saddest of circumstances.

I had the good fortune to spend three weeks, in 2009, in Calcutta with the Irish aid organization GOAL, which was then run by former sportswriter John O’Shea, himself an extraordinary figure who raised strong passions for and against.

What I saw of O’Shea’s work and the Missionaries of Charity order of nuns, run by Mother Teresa, made mute any criticism I had heard.

Putting it simply I had never seen such concern for suffering, for such poverty, for such desperate need for food and water, especially among women and young children.

India is a country of almost 1.4 billion people and has a central government that is incredibly weak and, frankly, uncaring about those who have no voice to speak up.  It is also caste-driven, so if you are in the untouchable category life can be very grim indeed.

The result is children are abandoned in their thousands, left to fend for themselves from as young as six years old up.

I met one little boy, alone in the world, who boarded the arriving trains every morning and gathered the discarded newspapers and resold them to eke out a living.

GOAL took me into the worst slums, down dark alleys with waste and rats and no sanitation, to see children clawing through garbage, young girls who looked barely in their teens being offered for sex.  Everywhere, there were desperate souls begging for food and shelter.

Yet I found a profound nobility there too, from extraordinary people like the GOAL volunteers who spent every day holding back a crushing tide of death, illness, and destruction, and from the ordinary Indian people themselves who, despite their circumstances, radiate a calmness and serenity that is quite extraordinary.

I met Irish nuns who worked for Mother Teresa’s order and was humbled by the incredible work they did, caring and protecting the least among them.

In short, the new investigative series that seeks to prove Mother Teresa was head of some cult rather than a great humanitarian is stretching the truth to the limits.

No cult leader would have had the extraordinary love and regard for her fellow human as Mother Teresa did. That is indisputable.