Remembering the wonderful Higgins, author of the funny and skillful advice column "Dear Bridget" for the Irish Voice. 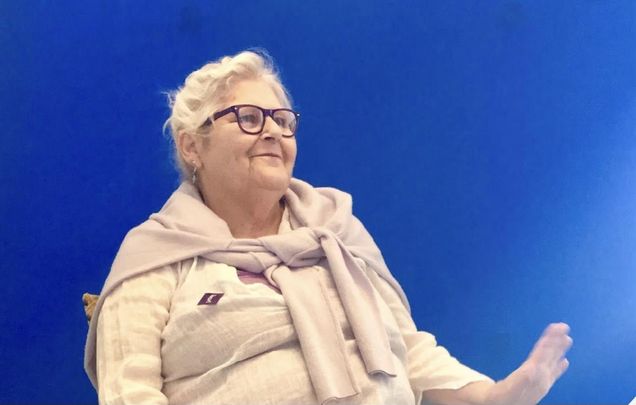 When you start a new publication there’s a 90 percent chance of failure so you better have a good team of writers. Such was the situation back in 1987 when the Irish Voice launched, just two months after the stock market crashed. That we survived was a miracle and in our case, an unassuming Belfast woman, Rita Higgins, had a big role to play.

We were greatly helped by the fact that there were two outstanding advice columns every week, one written by Debbie McGoldrick, the other by Rita.

Debbie wrote a U.S. immigration Q&A called “Green Card” and soon won an audience far beyond the Irish, while Rita began an advice column called “Dear Bridget” which soon attracted a hard-core audience who loved the fact that her advice was so blunt yet so thoughtful.

There were no sacred cows with Rita, no guilt trips.  She was especially passionate about women's issues, immigrant and refugee problems and helping those overcoming personal tragedy or trauma.

The deep impact of emigration, the fear of being arrested as an illegal,  problems with American-born wives or husbands, young men and women gay and struggling were all topics covered forthrightly and insightfully. It wasn’t the usual fare of an Irish American newspaper.

There was humor too, as only Belfast people can make it.  A typical “Dear Bridget” column appeared on December 29, 1992 issue and the headline was a beauty. “Wouldn’t Know Passion if it Hit Him on the Gob” was stern advice to a young woman to take her affections elsewhere as her reluctant lover wasn’t in the least bit interested between the sheets.

In January 1993 a heartfelt letter from a  woman who had divorced her husband but found it very hard to get access to her kids with her illegal status tugged at the heartstrings. A week later it was a young woman who was the other woman in a married man’s life.

Rita’s advice was clear cut: those relationships generally end in tears, expand your horizons and get busy learning some new skills.

Columns included  how to say goodbye to an elderly relative and the trauma of being  unable to go to the funeral because of being undocumented, Another column dealt with helping a young man in the Bronx who was trying to come to terms with being gay, in column after column Rita managed to be both tough and comforting, urging the person to realize the truth and act on it.

A poignant column about returning home for her own mother’s funeral in January 1993 seems especially relevant now.

“I got that dreaded call from home, the one that puts the fear of God in you,” she said in her opening lines.

She described her mother as a “loving, forgiving woman always with a song in her head,” not a bad description of Rita herself.

Rita accomplished so much in her life and top of her agenda was helping others.  Her family is incredibly talented, with her husband Terry George directing several major Oscar-nominated films like Hotel Rwanda and screenwriting In the Name of the Father.  He and daughter Oorlagh each won an Oscar for a film they did together; son Seamus is also in the creative business.

Oorlagh paid tribute to her mother's "spirit and passion" following her death.

She was the wife of acclaimed filmmaker and screenwriter Terry George.  They moved to New York with daughter Oorlagh in 1981, where their son Seamus was born.  She was a lifelong activist, working as an advocate for women's rights and on behalf of immigrants and refugees.

“She underwent a lung transplant in 2014.

Her daughter Oorlagh, who along with father Terry  won an Academy Award in 2012 for their short film The Shore, described her mother as ‘a truly awesome woman.’

"She had incredible energy – she would form a community wherever she went," she said.

Amen to that.  We here at the Irish Voice have lost a great friend.