If Vladimir Putin goes ahead and strikes into Ukrainian territory, the most important outcome for Americans could well be the re-election of Joe Biden. 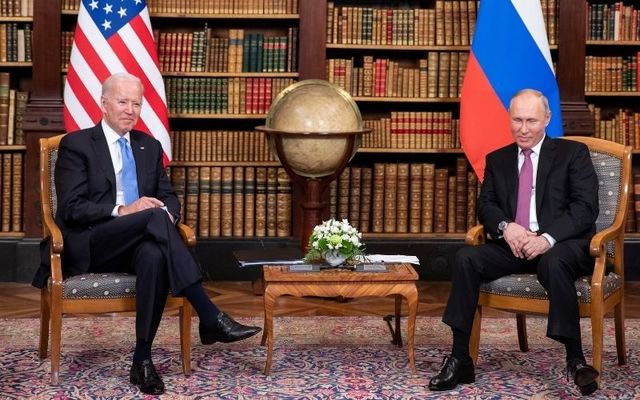 Can you imagine a re-elected President Trump standing up to Putin and showing the leadership of America to the world? No, me neither.

If Vladimir Putin goes ahead and strikes into Ukrainian territory, the most important outcome for Americans could well be the re-election of Joe Biden.

America loves a wartime president - just ask FDR or the two Bushes. Both George Senior for the Gulf War and George W. Bush for invading Afghanistan after 9/11 had approval ratings in the low 90s.

In fact George Senior was so popular he scared away all the top  Democrats who left the field to a longshot, name of William Jefferson Clinton -- you may have heard of him.

Putin according to The New York Times, has been living in his Covid bunker far too long and has lost contact with reality. (Maybe from his hidey-hole he thinks Trump is still president and he can just roll over him like he was doing when both men were in power.)

Or the secret meeting in Hamburg with Putin when Trump took even the interpreter's notes? Was it any surprise he wanted to defund NATO, the one army that stands between Putin and his ambitions to create a new Iron Curtain?

There is no doubt Putin would be halfway to Kyiv by now or maybe sipping vodka in Warsaw if Trump were still in the White House.

In American football, they talk about matchups all the time, how one particular player's style suits his opponent or does not.

In this case, Trump who wanted to abandon NATO, play footsie with Putin, and withhold vital funding for armaments to Ukraine,  comes out looking like the big loser. Putin’s build-up was carried out partly because he saw Trump's strategic ignorance.

Biden, with his vast years of experience, understood right away that only a united NATO and a clear signal to Russia that massive sanctions, cyberwar, and commitment of money and men to Europe was the correct line in the sand to draw.

Biden has been around long enough to know the Ferris wheel turns slowly, but it does turn.

He is on the bottom rungs right now but if Putin invades the backing for Biden and the exposure of Trump's appeasement policy towards Russia will be on display to the world.

Prospects for Biden in 2024 just got a lot brighter.