Ireland must stand with Ukraine as war continues

The Ukrainians neither asked for nor were responsible for the horrific fate that befell them. 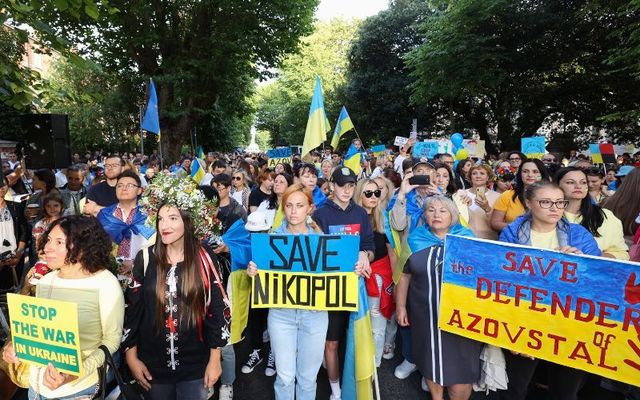 August 24, 2022: Members of the Ukrainian community in Ireland protesting outside the Ukrainian Embassy after marching from the GPO, on the date of both Ukrainian Independence Day and the six-month anniversary of the Russian invasion of Ukraine. RollingNews.ie

There are some 70,000 Ukrainian refugees currently living in Ireland, a number that seems certain to increase as the attempted genocide by Russia continues.

The Ukrainians were welcomed with open arms by the Irish at the height of the attempted Russian mass slaughter. Ukrainian blue and gold flags are everywhere; the people themselves are likable and ready to work hard.

Their own society was beginning to bloom until the Russian bear – for reasons unknown, other than obvious insanity by Vladimir Putin – decided to try and eliminate them from the face of the earth. 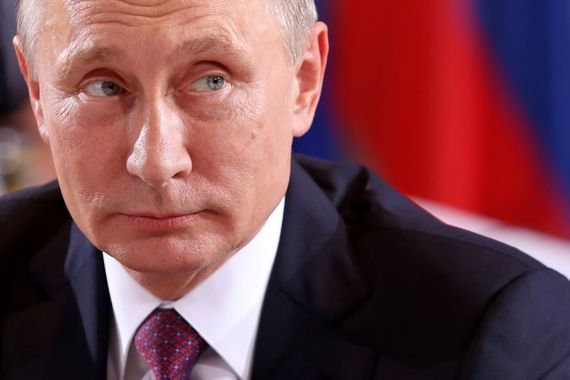 The bravery of the outmanned Ukrainian Army certainly caught the eye of the Irish people, no strangers to fighting against enormous odds for their own freedom.

The much-vaunted Russian Army has been revealed as a massive Potemkin platoon, with troop numbers and new recruits much smaller and less able to fight than was expected.

Remember the early days of the war when Ukraine was expected to bow the knee and submit/surrender?

It seems Putin believed it was merely a foregone conclusion that he would easily win a battle against Ukraine. He could not have been more wrong.

But with the influx into Ireland of Ukrainian refugees has come a huge number of practical issues. Suddenly Ireland must feed, clothe, educate and find accommodation and free medical coverage for what is the equivalent population of Co Waterford.

Already accommodation is at a premium, some Ukrainians have been living in tents because of the chronic shortage of housing. Housing was already in short supply, so the Ukrainians are currently living in many vacant hotels which were set to be shut over the winter season. 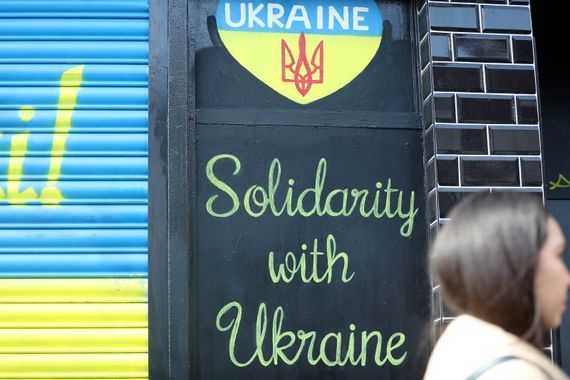 A Ukraine mural in Dublin. (RollingNews.ie)

Education is another vital component for the more than 13,000 Ukrainian kids suddenly finding themselves removed from their old familiar lives.

Wives miss husbands; daughters and sons miss their daddies who have stayed behind to fight. Every day the Irish Ukrainian families hope and pray today will not be the day someone knocks on their door with grim news.

There are no guarantees. Casualties are high. It is a brutal war.

The kids especially suffer. “You see it, especially in their pictures and drawings,” Olha Hnativ, 24, a Ukrainian native who teaches in Ireland, told The Irish Times.

“They miss their fathers, brothers, and families. They love school and making new friends but they miss homes.”

One can only imagine the stress for young students beginning school not knowing their fathers’ and in some cases brothers’ fates attending a school where all subjects are taught in a different language to what they grew up with. Yet it seems the kids have thrived academically.

Ireland has bravely adopted an open-door policy towards Ukrainians and has become a favored country for them to flee to. When they arrive they are immediately offered political asylum. It would be a cruel country that would turn aside such people in such dire distress.

The Ukrainians neither asked for nor were responsible for the horrific fate that befell them.

Of course, there was that immediate connection between the Ukrainian people and the Irish. Both have long-suffering histories of being invaded by world superpowers, Russia and the British Empire.

Russia has shown down through the centuries an utter disregard for their neighbors to the point of genocide in Stalin's time, and the Irish have had forced famine and flight inflicted on them in the British heyday.

Like the Irish, however, the Ukrainians will never give up their land. Indeed with every passing day that Russia displays more and more cruelty aimed at ordinary citizens, the stronger the Ukrainians seem to be.

May their cause endure. The Irish everywhere must stand with them on the basis of shared history alone.