Exclusive: Liam Neeson on the greatest of them all, Muhammad Ali

“God sent for his champion” in the words of Mike Tyson. 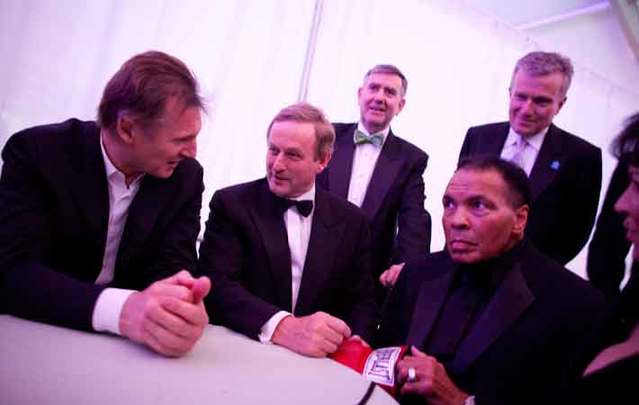 As a promising amateur boxer in his native Northern Ireland Liam Neeson was fascinated and star struck by Muhammad Ali who was just coming to prominence in the early sixties and in an exclusive interview Neeson says he remained so all his life.

"He was my hero from when I was a young amateur boxer, and schoolboy, back in Ireland. I'll never forget hearing that he had beaten the unbeatable Sonny Liston. It was 1964 and it was a cold wet February in Ballymena.

As I walked to school that morning, my feet didn't seem to touch the ground: my mind was an excited blur, because somehow the world had changed with that victory."

Neeson explained he had met his idol on two occasions and treasured the memories.

“I got to meet him and before he had his last fight in 1981. Not knowing what to say and with my knees shaking, I said "Muhammad, I love you." He gave me a hug and then signed an autograph for my father.

“I met him again in 2011. He was unable to speak with his advanced Parkinson's. I put my hand over his and whispered 'I love you'. His wife said to me 'He knows who you are'.

I have met and known quite a few movie stars, male and female over the years. None can compare with Ali's charisma. He was a giant of humanity. As a people, we are all in bereavement."

Neeson is just one of a huge group of notables who are marking the passing of an incredible man. The Irish expression is “Ni Feicimid a Leitheid Aris” translates as “We’ll never see his likes again.” It is often overused but on this occsion it is undoubtedly true.

Yet we should remember Muhammad Ali’s biggest fight in his life was not against Joe Frazier or George Foreman. It was against the insidious disease of Parkinson’s which landed a haymaker on him when he was just 42 and continued to beat him up every day of his life until his death this week at 74.

Forgotten among all the tributes to The Greatest is the fact that it is highly likely that it was boxing which brought on the Parkinson’s, especially those brain shaking blows to the head by heavy punchers like Joe Frazier and George Foreman.

Towards the end of his career Ali shipped some dreadful punishment by Larry Holmes, far younger and more agile at that point. Indeed at one point in one of their fights, Holmes himself begged the referee to step in and stop the fight, afraid he would kill Ali.

Boxing and blows to the brain likely destroyed one of the greatest and most significant minds of the 20th Century. Unlike Tom Brady he was not fighting over deflated balls, unlike Michael Jordan he was not selling sneakers.

He was showing America how unwinnable the war against North Vietnam was and how deep racism was ingrained still in America. But he was a great conciliator too, beloved by all. He could have made a profound difference.

Who can forget his appearance at the opening of the Olympic Games in Atlanta in 1996. Effortlessly he was the star and the remembered image of these games is him lighting the torch, his hand shaking but his heart full of pride.

Janet Evans, the American swimmer who handed him the torch, said: "It was all about courage. It was written all around his body that he was not going to let [it] do him in. He was still the greatest." But boxing, allegedly the sweet science, must take the heaviest blame for what happened to Ali  the greatest athlete perhaps ever known. If a way to protect boxers with headgear can be found it would be the greatest gift that Ali has given the sport.

I saw him twice, once at a Steve Collins fight I think it was when his very presence electrified the venue and then in 2011 when, in reference to his Irish roots through his great grandfather Abe Grady from Clare, Ali was guest of honor at the American Ireland Fund dinner in New York, an inspired stroke of genius by the group.

It was painful to watch the slow physical progress, the mask like face, the inability to speak, but he was a heroic as he ever was, meeting and greeting and even throwing a playful punch or two.

There were heavy hitters there that night, most notably Liam Neeson and Irish leader Enda Kenny but even they were like starstruck schoolboys in the presence of true greatness.

Ali had a rapturous reception when he visited his ancestral home in Clare but the Irish American welcome that night from titans of industry, politics and acting was equally impressive to behold They simply loved the man. As Kieran McLoughlin CEO of the American Ireland Fund, noted, the pleasure was all theirs that night in hosting Ali.

"The Ireland Funds were privileged to present Muhammad Ali with our Humanitarian Award at our New York Gala in 2011. While he will always be remembered for his extraordinary skills in the ring, his philanthropic work and indeed the discovery of his Irish lineage were just as extraordinary. He electrified that evening in New York and affected deeply our 1,000 guests. It is with great sadness that we mark the passing of this legendary man."