Looking back at the last interview with former Anglo Irish boss David Drumm before his Boston arrest on extradition warrant and trial in Dublin. 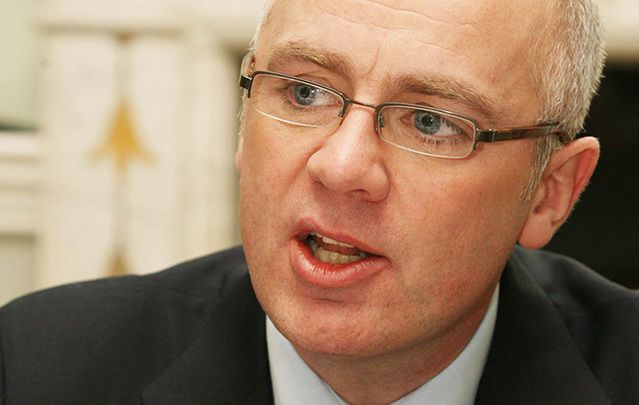 David Drumm, the former CEO of Anglo Irish Bank, was found guilty today of a $10 billion fraud that almost toppled the Irish banking system. The trial, which ran for 86 days in Dublin, was among the longest in Irish history.

Back in summer of 2015, IrishCentral's Niall O'Dowd interviewed Drumm in Boston, where he'd been residing since the scandal broke, just a couple months before he was arrested on an extradition warrant and returned to Ireland. Given today's events, we take a look back at what he said then:

David Drumm, former CEO of Anglo Irish Bank who has been living in Boston, was arrested on Saturday evening and held for an extradition hearing to Ireland set for Tuesday.

A spokeswoman for the the United States Attorney for the District of Massachusetts, Christina DiIorio-Sterling, told The Irish Times “I can confirm that Mr. Drumm was arrested today by U.S. Marshals in Massachusetts on an extradition warrant. He will remain in custody until his hearing in federal court in Boston on Tuesday. I cannot provide any further information at this time.”

Drumm has long been cast as the villain in the piece about Ireland’s massive banking collapse. He has always maintained others were equally to blame and that he was a scapegoat.

Any hopes that Irish authorities have that Drumm will go quietly are flatly contradicted by an unpublished interview with Drumm that I had this summer. Legal reasons in the end precluded printing the interview in full, but Drumm was in fighting form when he slammed the Irish authorities and the media.

In one section of the interview he flatly stated he would never get a fair trial in Ireland.

“Certain sections of the Irish media have been captured by the politicians, in effect do their bidding and frame the arguments in a manner such that politicians can continue to drive home their preferred and practiced version of the circumstances surrounding the collapse of the Irish economy.

“My version of events, acceptance of responsibility for my failings, and information that I feel should be made public, and is critical to the public interest, will never get a hearing because evidently the establishment has much to fear from my evidence.

“Their standard retort for any view I wish to express is, ‘Why doesn’t he come home and cooperate with the Gardai [Irish police]?’ This is their trump card and has the effect of ending all discussion. A large section for the Irish media are happy to go along with this and reinforce the message with scandalous libel and untruths about me printed and published on an almost daily basis.

"The media and politicians have criminalized me repeatedly and exhaustively. I have never been charged with a criminal offense. I am routinely described as having ‘fled’ the country when in fact I moved back to the U.S. with my family in June 2009, six months after I left the Bank.

“I returned to Ireland on two separate occasions in 2009, both of which were to speak with the Bank about my loans. On the first occasion my visit to the Bank was purposely leaked to the media and a photographer and senior political journalist were waiting for me at the front door. On the second occasion the Bank cancelled a settlement meeting that I had travelled over for, and soon after issued legal proceedings against me and my wife, all for political effect.

“It is abundantly clear that I have been made a scapegoat for all of the problems Ireland has endured since the financial crisis of 2008. I have always accepted my professional failings but I will not be bullied and criminalized for political advantage and to deflect blame from others.

“The media and the government have ensured that my voice will never be heard, and just in case I am heard, they have executed an unprecedented campaign to destroy my credibility.

I continue to have faith that the Irish public is well aware of how poorly they are represented with dishonesty, spin, corruption and incompetence the mark of Irish politics.

“My Irish friends and family tell me that the public has long since tuned out from the politicians and the media because it’s the same old spin, over and over again. Sadly, but understandably, nobody in Ireland will speak out because they don’t want to be the next person to have the media set on them by the establishment that they would dare to question.”