The closed circuit TV footage of the moments leading up to the killing of journalist Lyra McKee in Derry on Friday night are truly shocking for what they reveal. 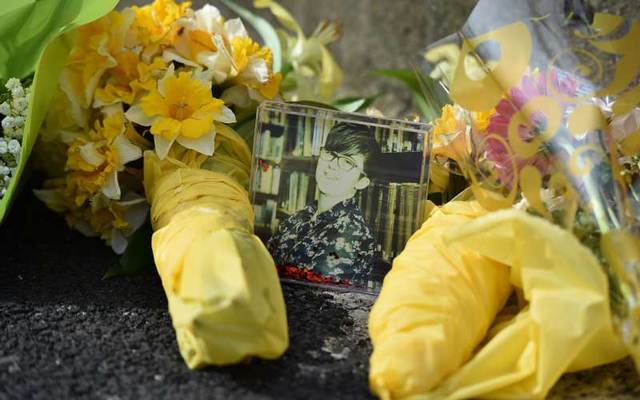 Flowers and photo left in tribute to journalist Lyra McKee near the scene where she was killed on April 19, 2019 in Derry, Northern Ireland. Charles McQuillan/Getty Images

The closed circuit TV footage of the moments leading up to the killing of journalist Lyra McKee in Derry on Friday night are truly shocking for what they reveal.

There is a riot in progress in the Creggan district as about fifty youths throw Molotov cocktails and stones at police lined up behind the armored vehicles. Mingling with the police are civilians, including Lyra McKee like any good journalist covering the story live.

In the video she appears a slight figure behind the much taller policemen. She's on her tippitoes, her hand held high, using her cell phone to take a picture of the angry scene.

Read More: Lyra McKee: kindness defined her, we must fight for her memory

The scene is illuminated by the flares from the exploding cocktails. The video view is from behind police lines Suddenly, we see the gunman, dressed in dark clothes and wearing a mask and hood step briefly out from behind a barrier and survey the scene.

He steps back into the shadows and next we see him from another angle, from behind the rioters.

The gunman reemerges clearly holding a handgun and begins to fire. It looks like there are two shots about three seconds apart.

Then he steps back and he and a fellow hooded figure search the ground intensely for the bullet casings before they disappear.

The gunman must have seen that there were civilians ike McKee mingled behind the police line. The bullet was fired with murderous intent and the gunman did not particularly care who got shot.

Lyra McKee was shot in the head and fell to the ground mortally wounded.

Investigating officer Superintendent Jason Murphy stated “Lyra was killed by shots that were fired indiscriminately in Fanad Drive,” he said. “The brutal nature of that attack has sent shock waves around the world.

“The shots were fired in a residential area at a time when there were large numbers of people, including children, standing by.

“The gunman showed no thought for who may have been killed or injured when he fired those shots.”

The gunman is believed to be a member of the New IRA, a group linked with efforts at increasing violence in Northern Ireland. It was interesting to note how quickly two suspects were arrested. The community abhorred and reviled what had been done in their name, and it seems police had little difficulty getting information.

Lyra McKee was eight years old when the Good Friday Agreement was signed. She was part of the “”ceasefire generation,” children who grew up in the post-Troubles era.

Lyra was an outstanding young journalist on her way to the very top. Her life was snuffed out just as her career and personal life as an LBGT women were taking off.

Her killer, it seems, was not even born when the Good Friday Agreement was signed.