The local community in Derry have come together to mourn the death of slain Irish journalist Lyra McKee and to speak out against the militant republicans responsible for the killing. 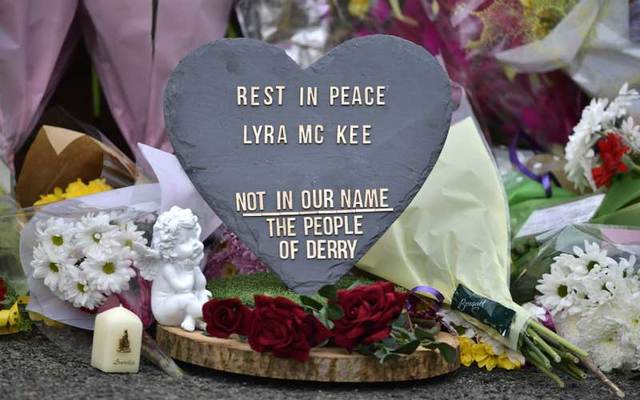 On Thursday, Lyra McKee was shot dead during rioting in the Catholic neighborhood of Creggan in Derry. Northern Irish police believe that the “New IRA” is responsible for the riots and the murder of the 29-year-old Irish journalist. Two teenage men have since been arrested in connection with the killing.

The local community in Derry have come together to mourn the death of  slain Irish journalist Lyra McKee and to speak out against the militant republicans responsible for the horrific violence.

That morning, parish priest Fr Joe Gormley told the local BBC radio: “There are so many good people in our parish and these people go into our area and use us to carry out such vile acts . . . How dare they? How dare they do it?”

Graffiti in Creggan #Derry which had read ‘IRA Undefeated Army 2019. Unfinished Revolution’ has letters painted over to give it a new meaning following the death of Journalist Lyra McKee on Thursday night #LyraMcKee pic.twitter.com/pl08HGHcUK

On Friday afternoon, thousands of people crowded into Fanad Drive, where the shooting took place, to show their solidarity with McKee’s loved ones and to demonstrate their opposition to her killers, The Irish Times reports.

“I’m only 30,” said a young woman named Tanya. “My family are from Creggan, and I’ve never heard of anyone I know being shot dead.

“I felt it was important to come to send a message that this not done in our name.”

DUP leader Arlene Foster, who admitted to the applauding crowd that it was her first visit to Creggan, said: “It doesn’t matter whether you’re a Catholic or a Protestant, or whether you identify as Irish or British — when people come out with guns to shoot people from their own community then we have to say, enough is enough.”

Stevie Mallett from St Mary’s Youth Club told the crowd: “This is what community is. It’s whenever we all come together.

“I think many of the young people who may have supported [dissident republicans] in the past have a very different mindset today.

“Let’s hope this is the beginning of something, that we change this attitude. I never want to be here standing like this again.”

Security journalist Eamonn MacDermott said: “The dissidents are coming under intense pressure. They have brought themselves to world attention in a way they didn’t want.”

Heartbroken by the murder of Lyra McKee and the violence in Derry. The challenges in NI today are real--but we cannot let go of the last 21 years of hard-won peace and progress. This tragedy is a reminder of how much everyone has to lose if we do.

The dissident commemoration parade on Easter Monday, which sparked rioting last year, has been canceled in the wake of McKee’s death.

“It will be a setback for them,” said McDermott. “How big a setback remains to be seen.”

McKee’s partner, Sara Canning, said her partner’s dreams had been "snuffed out by a single barbaric act" and that she had been left without "the woman I was planning to grow old with.”

"The senseless murder of Lyra McKee has left a family without a beloved daughter, a sister, an aunt and a great-aunt; so many friends without their confidante," she added.

"We are all poorer for the loss of Lyra."

A very brave and powerful moment.

Mayor John Boyle described the “bright, warm, witty, outstanding individual who had been a great friend to so many in this city.”

“There is an awful lot of anger in this city today,” he said. “This was not done in the name of the people of the city.”

Read More: Murdered Irish journalist wrote an extraordinary letter about being gay to her 14-year-old self

Before her death, McKee wrote on Twitter: “Derry is such a beautiful city. I’ve fallen in love with it over the past year, while falling in love with a woman who hails from it.

“Here’s to better times ahead and saying goodbye to bombs and bullets once and for all.”