Let’s not forget, the British brought slavery to the United States

Niall O'Dowd: The issue of the impact of slavery on America and the debate over White guilt because of their role overlooks an important fact. 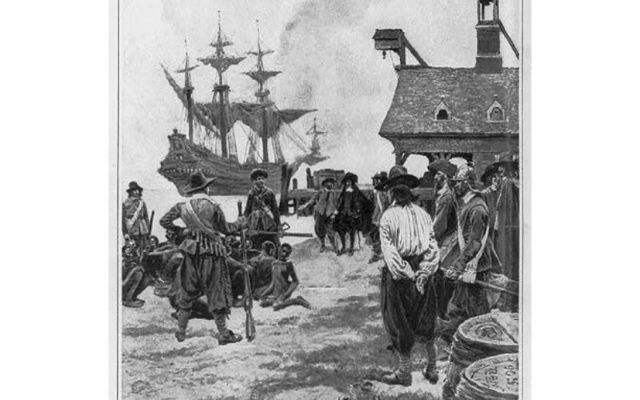 A reproduction of a painting, "Landing Negroes at Jamestown from Dutch man-of-war, 1619". Library of Congress

Where did the slave trade which tore America apart come from in the first instance? From the British actually.

While the Founding Fathers were consumed by the issue of slavery it was not of their making. Let us not forget that later British support for the Confederacy in the US Civil War was also related to their desire to continue to profit from slavery. They have no moral standing on this issue.

Often overlooked is the 13th Amendment that banned slavery, also banned indentured servitude which saw mostly Irish held in bondage by British masters until they served their time.

Dr. Cassandra Newby-Alexander, Professor of History at Norfolk State University in Virginia, told Aleem Maqbool of the BBC that it is a little-known fact that the US learned the slave trade from their British masters before independence.

"Britain put its stamp on America from the beginning. It was Britain who brought the first unfree Africans to this country and helped to start slavery in America," Maqbool quotes Newby-Alexander.

The historian says the first British ships carrying slaves arrived in Old Point Comfort, in the colony of Virginia, in 1619.

"It was late August of 1619, and it was the English vessel, White Lion," Dr Newby-Alexander says. She believes the ship brought “20 men and women that had been ripped from their homeland in what is now Angola.”

Adds Dr. Newby-Alexander: "Once they were here, they [the British shipowners] began to sell those individuals that they saw as part of their cargo to the leadership in the colony."

Thus began the shameful legacy of slavery in America.

Dr. Newby-Alexander continued "America didn't officially become America until 1783 when the Treaty of Paris was signed. Up until that point, everything that America created was English, including slavery, including laws on which slavery and inequality was built. It came from England. It came from the English system.

"If you claim that America has its foundational culture based on England, then you've got to take it all. That includes the systemic racism in our laws, in our practices and in our culture."

The BBC report noted that: “Policing in the southern United States had its origins in slave patrols set up under the British in the early 1700s. Local laws started to be drawn up that regarded black people as inferior.”

"The policing that we see that automatically assumes that a black person is a criminal, is already guilty, that started from the founding of our country that viewed Africans as systemically different."

Adds Maqbool: “A lot of the British elite again found themselves on the wrong side of history. They sent supplies and arms to the confederacy, many wanting slavery to continue because of their own business interests. Their side was defeated.”

Slavery was the reason the United States almost fell apart before it was constituted. A dreadful bargain holding that slaves were not full human beings and that fugitive slaves could be returned from free states to slave states saved the Republic. If ever there was a deal with the devil, that was it.