Al Sharpton honored with James Joyce award - No, not a sick joke

It was shocking to see University College Dublin’s Literary and Historical Society present their James Joyce award to Al Sharpton. 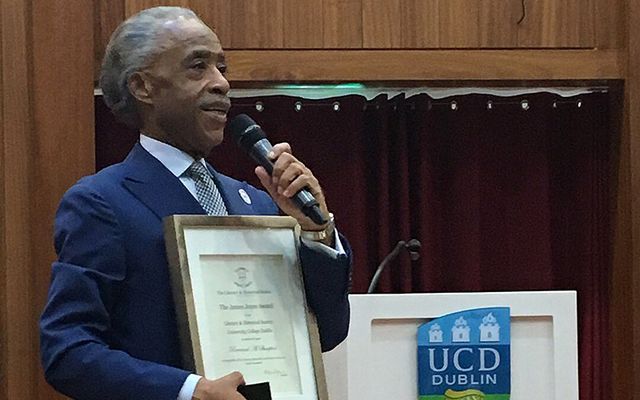 It was shocking to see University College Dublin’s Literary and Historical Society present their James Joyce award to Al Sharpton.

Not mentioned anywhere in the citation was Sharpton's role in the Tawana Brawley case, during which he defamed and destroyed utterly innocent men over a rape that never happened.

Nor were Sharpton’s former ties to the mob nor his role as an informer brought up, which is really no surprise.

Sharpton joined a prestigious list of other honorees that includes Nobel Prize-winners anti-apartheid campaigner Archbishop Desmond Tutu, Irish politician John Hume and poet Seamus Heaney. I have no doubt those three great men would be disgusted at the company they are now keeping with the award.

While in Dublin, Sharpton also spoke to the Trinity Historical Society.

Taking a picture with the student leaders of HIST at Trinity College in Dublin. @tcddublin pic.twitter.com/Sxt153aOY7

Sharpton, of course, rarely deals with his role in the Tawana Brawley case these days, but at one point he had roped the IRA into a role in that particular case. It was fake news before Trump ever invented the term.

Back in November 1987, Brawley, a troubled 16-year-old girl from Wappinger Falls in upstate NY, alleged she had been raped and that “KKK” and the “N” word had been carved into her skin by a group of white people.

First, he pointed the finger at a local police officer, who had committed suicide in an utterly unrelated event. The family of Harry Crist had to endure a terrible nightmare as Sharpton blackened their late son’s name with no evidence whatsoever.

But Pagones, a Dutchess County prosecutor at the time, defended his dead friend Crist, offering an alibi for the cop – it turned out they were Christmas-shopping together on one of the days in question and on the three other days of the “kidnapping,” Crist was on patrol, working at his other job at IBM, and installing insulation in an attic.

Brawley’s handlers then claimed – without proof – that Pagones was part of the white mob that kidnapped and raped the girl 33 times. They turned Pagones' life into a living hell even when he won a defamation case against them.

Then Sharpton made an even more bizarre claim that he had been told that a secret white men’s cult group with links to the Irish Republican Army had done the dastardly deed.

It turned out that Tawana Brawley had made the whole “crime” up, pretending to be raped because she feared being grounded for seeing a boyfriend.

Sharpton was utterly and profoundly wrong, subsequently lost a defamation case and was widely reviled for his race-baiting. He was later revealed as a paid FBI informer involving mob links he had.

But he rode his notoriety from that event to the very top as the pre-eminent black spokesman.

Now presidents and mayors come calling. MSNBC even gave him a nightly show for a time. Now the name of Ireland's greatest writer has been linked to this charlatan. The UCD Society that invited him should be ashamed of themselves.