Is the end near for Fianna Fáil?

Fianna Fáil, the once almighty party of Éamon de Valera and Seán Lemass, could cease to exist. 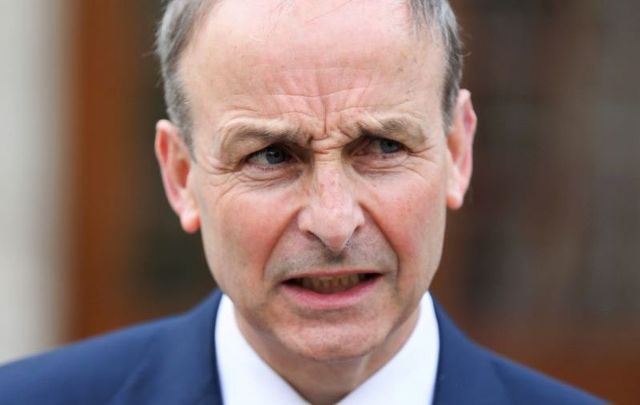 Once the behemoth that bestrode Irish political life for over half a century, the Fianna Fáil party these days is a sorry sight. Long gone are the glory days when it dominated Irish politics and was the natural party of government here.

Yes, it is leading the present coalition government and the party leader Micheál Martin is the current Taoiseach. But that bears no relation to its present support level.

Two national opinion polls published last weekend confirm what we have known for at least a year or two: Fianna Fáil's support is collapsing. One poll (in the Sunday Business Post) has Sinn Féin on 29 percent and Fianna Fáil at a pathetic 13 percent. The other poll (in the Sunday Times)  was almost as bad for the party.

Fianna Fáil appears to be doomed. And they did not need the disastrous polls to tell them that. It's been obvious for some time. Which is why they had a two-day think-in last week in a hotel down the country to try to figure out what to do.

The declared purpose of the meeting was to review an internal report on Fianna Fáil's performance in the February 2020 general election and identify why it had not done better. It had hoped to make gains in that election but instead lost seven seats, sliding from 45 to 38. It did manage to get more candidates elected than either Sinn Féin or Fine Gael -- but only just. And since then things have got worse.

A couple of months ago, the party got only 4.6 percent of the vote in the Dublin Bay South by-election, its lowest share of the vote ever in any constituency. That really set the alarm bells ringing.

Of course, this decline did not start in the last year or two. It goes back to the crash a decade ago and the austerity program forced on the country by the International Monetary Fund when we got the bailout.

Fianna Fáil had overseen the crazy boom and the voters blamed it for the bust and abandoned the party in their droves in the subsequent election. Fine Gael took power, with Enda Kenny as Taoiseach.

But the Fine Gael popularity soon weakened, largely due to all the problems left in the wake of the crash. Leo Varadkar took over as Fine Gael leader and Taoiseach after Kenny's retirement but needed Fianna Fáil support in a confidence and supply agreement to form a minority government after the 2016 election.

After the last election at the start of 2020, the two parties did a deal to share power, with Green Party support, in the present coalition government. Martin is Taoiseach for the first half of the five-year term (up to December 2022) and Varadkar is to return as Taoiseach at that point up to the next election due in March 2025.

That deal was seen as historic, a coalition between Fianna Fáil and Fine Gael marking a final end to Civil War politics. That may be true. But it's a humiliating position for Fianna Fáil, the party that for around 50 years used to have enough support to form governments on its own.

To be fair to Martin, he did bring the party back somewhat after the annihilation that followed the crash. But it's not enough and their very survival is now in doubt thanks to the relentless rise of Sinn Féin with its populist policies.

Just as Sinn Féin cannibalized the SDLP in the North, it appears to be doing the same here in the south to Fianna Fáil. If Fianna Fáil does not recover before the next election it is possible that the remnants of the party may split, with its moderate Dail members merging into Fine Gael and its more republican members joining Sinn Féin. Fianna Fáil, the once almighty party of Éamon de Valera and Seán Lemass, could cease to exist.

The fear that this could happen has led to rumblings of a revolt against Martin as leader. At the Fianna Fáil think-in (an oxymoron according to the cynics) Martin's main objective was to face down his critics. And he seems to have succeeded in that, with no revolt emerging at the two-day meeting last week.

But the problems facing the party are far bigger than who is leader. The main one is that no one is sure what its purpose is anymore.

Fianna Fáil, which always styled itself as the republican party, had an emotional appeal over the many decades it held power on that basis. But the North is no longer the primary concern here for most people, and those who do feel strongly on that issue now support Sinn Féin.

Apart from its republicanism, Fianna Fáil's other main appeal was that it claimed to represent all levels of Irish society, from the small farmers in rural areas to the better off people in urban areas. The problem for it now is that much of its working-class support is disillusioned by the problems in housing and the health service, the cost of living, and accusations of incompetence and elitism. They have migrated to Sinn Féin, taken in by that party's promise of a new beginning and instant solutions.

So where exactly Fianna Fáil is relevant is no longer obvious. The tendency for middle-class voters is to lean towards Fine Gael -- it was on 28 percent in the Business Post poll, one point behind Sinn Féin.

There is no longer any difference between Fianna Fáil and Fine Gael, except that Fine Gael did not cause the crash and has less corruption in its recent history. The two of them should merge, many voters believe, which really means Fianna Fáil being subsumed into Fine Gael.

Fianna Fáil no longer has a clear identity and agenda, and it failed to offer a convincing policy platform in the last election. That was one of the main findings of the report presented to the party last week.

Another was that Martin had spent too much time attacking Sinn Féin. But what is he supposed to do? Ignore the shameless populist rubbish that Sinn Féin is using to mislead the voters?

Of course, Fianna Fáil's difficulty goes back to the crash 10 years ago, after which it was almost wiped out. It has recovered somewhat in the last few years but its relevance is fading.

Its "confidence and supply agreement" to support the last government, a Fine Gael minority administration, gave the impression of weakness.  Similarly, its deal with Fine Gael to share power in the present coalition government makes it look weak.

There is a widely held view that Martin is weak as a leader and that the Fine Gael ministers in the government do whatever they want and are just waiting for Varadkar to take over again at the end of next year. That is unfair to Martin, although there is the belief that he so desperately wanted to avoid being the only Fianna Fáil leader to never become taoiseach that he will accept anything.

That is not true. His refusal to fire Foreign Affairs Minister Simon Coveney over the ridiculous Zappone affair was correct -- it's a nothing issue -- but it fed into the narrative of weakness. And this week Sinn Féin will take a no confidence motion in the Dáil on the issue, blowing further air into a balloon of nonsense.

It's not easy being Martin these days. How he keeps such a calm, polite demeanor in the face of so much provocation from Sinn Féin is a wonder. Maybe he needs to get a bit more mad to register with the voters.

One thing the weekend polls confirm is that Martin and Fianna Fáil have got little credit or thanks for the competent way they have steered the country through the Covid crisis. Our economy is relatively unscathed. Our vaccination rate is now the envy of every other country in the world. But Fianna Fáil has got no support bounce for that success.

This shows the extent of the existential crisis facing the party. They can't do anything right and even when they do they get no credit for it.

The internal report presented to the party last week identified the problems but had no answers. Maybe there are no answers.

History appears to be moving on and Fianna Fáil is being left behind. The Sinn Féin nightmare awaits ahead.