Professor Christine Kinealy considers the Irish Famine in light of the present situation in Ukraine. 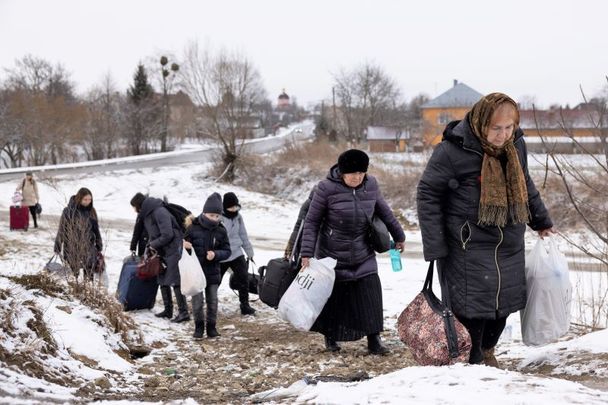 March 9, 2022: Refugees fleeing conflict make their way to the Krakovets border crossing with Poland in Krakovets, Ukraine. More than a million people have fled Ukraine following Russia's large-scale assault on the country, with hundreds of thousands of Ukrainians passing through Lviv on their way to Poland. Getty Images

The Great Hunger has been on my mind a lot lately – even more than usual.

First, this year marks the 175th anniversary of Black ’47, generally believed to be the worst year of the seven-year-long tragedy. Together with a number of other historians, I am planning a commemorative symposium in June.

Secondly, the continued closure of Ireland’s Great Hunger Museum, and the recent announcement of its relocation, have been both painful and emotional.

I spoke at its opening in 2012, along with many of the Irish artists whose painting and sculptures so poignantly capture the suffering of those years. The museum’s closure and the subsequent controversy have led me to reflect on the real significance of such a collection of art in terms of remembering – and understanding – the Famine.

Thirdly, and most importantly, the situation in Ukraine, and the sight of refugees – mostly women, children, the old, and the infirm – fleeing from their homeland in a desperate act of survival, reminds me of the two million people who had to leave Ireland between 1846 and 1855. Few returned.

In this context, the words of Irish American writer William Faulkner are especially apt: “The past is never dead. It’s not even past.” Ireland’s past is Ukraine’s present.

But the Famine cast a long and deeper shadow over Ireland and its diaspora. As recent developments in Epigenetics have taught us, the trauma of famine and starvation literally became part of the DNA of the people who survived. That DNA is transgenerational, and it remains for five generations.  We are, therefore, in a very real sense, the children of the Famine. It is in our DNA.

Writing in 1904, Michael Davitt, himself a Famine survivor who masterminded a “Land War” that would end the landlord system (and hence famines) in Ireland, referred to the Great Hunger as “the holocaust of humanity.”

It is, perhaps, no surprise that the initial funding for the Great Hunger Museum was given by two Jewish brothers who had no connection to Ireland, but whose family had been victims of another man-made tragedy. They believed that educating people about the Irish Famine was the best way to stop such inhumanity from occurring again. Like many connected with the original vision to open the Great Hunger Museum, they have deplored the decision to remove the collection from Hamden and to take it out of its university setting.

Other groups who have no direct connection to Ireland, but who are familiar with poverty and prejudice, have displayed a similar empathy. A few years ago, Gary White Deer, a member of the Choctaw Nation – a people who had been displaced and died during the Trail of Tears in the 1830s – spoke movingly about the $174 gift sent by the Choctaws to the Irish poor in 1847. When reflecting on the meaning of the Great Hunger to both peoples today, he referred to it as “a sacred memory.”  For me, those three words have become my guiding star when researching or writing about the Great Famine.

Honoring the memory of the Famine requires more than managing a museum created in its name. Remembering this and other tragedies requires us not only to understand why such tragedies occur, but also to say, “Never Again.” And choosing this path requires us to act with honor and integrity, and even courage.

In the words of former Irish President Mary Robinson, being descendants of the survivors of the Great Hunger gives us an informed consciousness, and hence a moral imperative, to act when we see injustice in the world. This week, I am asking myself – should we be congratulating ourselves on saving a museum when we are failing to save the lives of innocent people in Ukraine? Do we have a moral imperative to speak out against this unwarranted invasion?

In the words of Frederick Douglass, the escaped slave who was in Ireland at the onset of the Famine in 1845, “I see much here to remind me of my former condition, and I confess I should be ashamed to lift up my voice against American slavery, but I know that the cause of humanity is one the world over.” Echoing the mantra of Daniel O’Connell, he urged those who wanted change to “Agitate! Agitate! Agitate!”

Our ancestors, indeed, our very DNA, compel us to do no less. Unless the new custodians of the relocated Great Hunger Museum understand its significance in the quest for social justice for all, the universal lessons of this Irish tragedy are lost for everyone.

Professor Christine Kinealy is the author of many books on Irish history, including "Charity and the Great Hunger in Ireland: The Kindness of Strangers" (2013) and "Black Abolitionists in Ireland." (2020)