Dublin is becoming multi-cultural and cosmopolitan, for better or for worse, thanks to immigration. 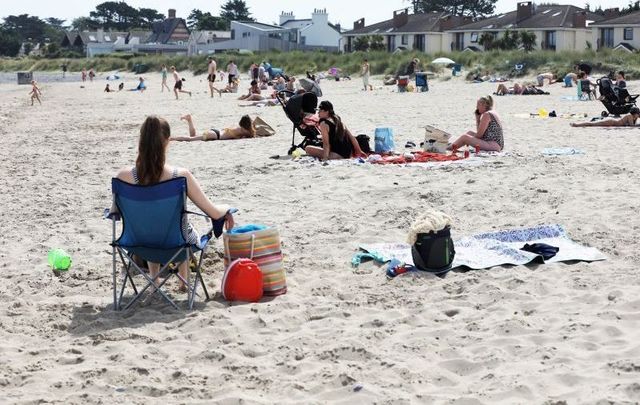 July 22, 2021: Burrow Beach in Sutton, Dublin, where members of the public gathered to enjoy the sun and go swimming amidst a heatwave. RollingNews.ie

Being near a beach in a heatwave is a blessing, and it was much appreciated by yours truly in the past week when the temperature in Ireland hovered around 30C (about 86F) every day.

I've lived near the Burrow Beach between Sutton and Howth on the north side of Dublin for many years. It's a beautiful and lengthy stretch of sand, popular with swimmers, kite surfers, and families out for a day at the seaside.

It's easily accessible since it's at the end of the Dart rail line from the city. So when the sun is out -- and it was blazing all last week -- it's a great escape for people from the city and very popular as a result. I was sea swimming there myself every day last week.

These days, however, the locals like me don't call it the Burrow Beach. We refer to it as Copacabana. The reason is that it has been adopted by the many Brazilians who live in Dublin as "their" beach.

Hundreds of them were on the Burrow Beach every day last week, dancing to samba and rave music from their boom boxes and playing skillful beach soccer and volleyball games. They had five volleyball nets set up along the beach last weekend.

Nearly all of the crowd are in their late teens or 20s, and being Brazilian and olive-skinned, they are much better looking than the pasty white Irish with their pink sunburns. The girls, as mesmerizing as the Girl from Ipanema, wear thongs. The guys are fit and tattooed. And they all know how to party.

But there's a difference. Unlike some of the Irish youngsters on the beach last week who can't have a good time without getting drunk and disorderly, the Brazilians can party while staying relatively sober and good-humored.

As the day goes on and eventually the sun goes down, they don't fight and spew bad language. They aren't threatening or obnoxious. The atmosphere remains light and friendly.

And there is one other notable difference. When they leave the beach they bring their rubbish with them, the bottles and cans, food containers, and disposable barbecues, carrying it to the big bins near the beach entrances.

Many of the young Irish leave their rubbish behind them, turning the beautiful beach into a litter-strewn mess. Even if there are bins a few yards away, they drop the cans and bottles on the sand at their feet.

Last week here was all about the glorious weather and chilling out by the sea. We don't often get a sustained spell when it's as hot as southern Europe. So everyone here makes the most of it when it happens.

But the takeover of my local beach by the Brazilians -- apart from turning it into an Irish version of Copacabana -- is also a visible illustration of something else. It shows just how cosmopolitan and multi-cultural Dublin has become.

This is a topic that divides people here. You either think it's great because it has opened up the country to new thinking and a new energy. You believe this has helped to move us away from the oppressive Ireland a few decades back when the church ruled everything and being Irish was all about conforming and being the same.

Or you take the other view. You think all this immigration and multi-culturalism is a mistake because we have lost something precious, a coherent identity, a shared sense of who we are, what our values are, and how we live.

The divide usually goes along age lines, with the younger generation more open to a multi-cultural Ireland and older folk resentful at a new Irish society they did not agree to and find confusing and alien.

I can see merit on both sides. Change and diversity is good and probably inescapable in today's shrinking world. Young people are comfortable with that.

And although we did not encourage immigration here for that reason -- we needed the workers during the boom – we badly needed to shake up the suffocating society we had become. You could say it is a bonus.

From the perspective of the older generation, we have lost something in the process. Ireland used to be a singular society and there was comfort and reassurance in that. We were all the same. We might have been miserable thanks to the grip of the church and the stuttering economy, but we were all miserable together!

Visiting cosmopolitan London or New York back then was an eye-opener to the wider world in all its diversity. As a young student in the late 1960s, I spent several summers working in London in Walls Meat Factory where the night shift was known as the UN because it had so many nationalities. It was exhilarating -- but it always felt good arriving back in Dublin where everything and everyone was familiar and uniquely Irish.

These days there's not much difference between London (or New York) and Dublin -- it's the same cosmopolitan, multi-cultural mix. Whether you see that as a win or a loss depends on your point of view.

What we do know is that the change was not planned. It happened more or less by accident.

Two things were behind it -- the enlargement of the EU in 2004 to admit 10 Eastern European states and the booming Irish economy at the time which needed more workers, especially in construction and hospitality.

Ireland was one of only three EU countries back then which immediately allowed anyone from the 10 new member states to come here to live and work. We were told at the time it was temporary and they would go home again when their economies improved. But this did not happen and they stayed on even after our economy crashed a few years later.

The number of non-Irish-born people living here now is close to 650,000 or 13 percent of the population. Far more people here now can speak Polish rather than Irish.

Although East Europeans make up the majority of the "new Irish" here, we have also attracted significant numbers from Asia and Africa, particularly from Nigeria. A more recent trend is the high number of arrivals from South America, from Brazil, Venezuela and a few other countries there. And that was very evident last week on the Copacabana beach on the north side of Dublin.

Unlike other non-European immigrants here, the South Americans don't claim to be asylum seekers. They say they are here to visit Ireland, to see friends or to study English. The reality is that many of them join the black economy and stay on long after they are supposed to have left.

There is a general misconception that it is difficult to get into Ireland. This is untrue and people from most countries around the world (including South America) can apply online for a 90-day visa to visit here but not to work.

At immigration at Dublin Airport, they may be asked for proof of funds to support themselves while they are here. But generally, most get in without a problem. The English language school route is one taken by many young Brazilians because that visa allows an eight-month stay and allows them to work here part-time. They can apply for three such visas in a row adding up to two years.

There are some checks to make sure that the language schools are legitimate and that students are attending classes. But a good deal of this is self-reporting and form-filling. The sector is now an industry, and there have been a number of cases of very dodgy language schools not following the rules and then going out of business.

The reality is that many of the Brazilians -- and young people from other countries -- use the system to get in here and then stay. Call up a Deliveroo (our version of GrubHub) rider here and usually, the guy at your door will be South American.

There is another way of looking at this, of course. This Monday saw bars and restaurants here reopen for indoor service (if you are vaccinated) as Ireland continues to progress out of the Covid shutdown.

But there is a problem because the shortage of staff in the hospitality sector is acute. Many of the young Irish are still on the generous Pandemic Unemployment Payment (PUP) and don't want to work, especially when the sun is shining. So if you're over here don't be surprised if your pint of Guinness is served by a Brazilian.

It's the same story in construction where despite our housing crisis and a huge demand for homes, building firms can't get enough staff to work on new developments. Last week there were 20,000 construction workers still on the PUP here.

Just like in the U.S., this has become a major problem both in hospitality and in construction. Why should the locals work when they can get so much money for free?

So Copacabana is probably here to stay. I'll have to practice the samba.