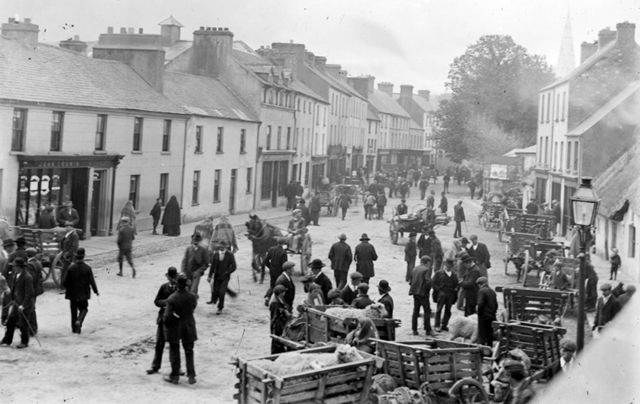 College Street, Killarney, Co. Kerry, where the procession through the town took the released prisoners until they addressed the crowd outside Gleesons Hotel. National Library of Ireland

The first edition of The Kerryman newspaper hit the stands on the 27th of August 1904, and it was staunchly Republican from the get-go.

In the years that followed its local journalists would write passionately about the efforts of the sons and daughters of the Kingdom in the Rising, the War of Independence and the Civil War.

With politics like theirs though, it was inevitable the paper would come into conflict with the crown forces, which prevented it from going to press on several occasions but could never extinguish its flame.

In Rebel Kerry historians Ryle Dwyer and Helene O’Keefe, Donal Nolan and editor Simon Brouder write of banner moments in the struggle for Irish independence as seen from (and frequently happening in) Kerry.

Roger Casement’s ill-fated landing on Banna Strand on the eve of the Rising is recalled in vivid detail.  Although he only spent a short time in the county (and most of that as a prisoner), his presence in Banna has given the place a charismatic historical importance that has endured to this day.

The sad fate of poor Thomas Ashe, one of the most ardent of the local Irish Volunteers, is recalled in the pages of the paper and reproduced here. Ashe was court-martialed and sentenced to death alongside Eamon de Valera after the Rising, but the sentence was later commuted to penal servitude for life.

After the U.S. entry into World War I in 1917, the British government faced growing pressure from Washington to address the growing Irish “problem.” Shocking accounts of prisoner mistreatment alongside widespread protests in Ireland added further to the pressure, as did the hunger strikes by the prisoners themselves.

Ashe was freed in June 1917 as part of a general amnesty, but he was soon arrested again for sedition, and after another hunger strike he was force fed so brutally by the prison wardens in Mountjoy that he died.  Later 30,000 mourners filed by his wake to pay their respects.

The atrocities that occurred throughout the struggle for independence from the crown (and later between Republicans and Free Staters) are all too quickly forgotten. But in Rebel Kerry the real cost of the conflict can be discerned again, and the lesson is unforgettable.

Young men and women who fraternized with crown forces, or worse had actually contemplated joining them, could find their hair clipped off or tarred and feathered as warning to others, and The Kerryman had the report each time.

During the lead up to the planned execution of the teenager Kevin Barry in Dublin on November 1, 1920, the IRA decided to respond to the provocation by shooting as many British police and soldiers as they could.

In the weeks before Barry’s planned death by hanging, Rebel Kerry reminds us that the IRA shot two Black and Tans in Killorglin, wounded two more in Dingle, and a further two policemen were taken prisoner and shot (their bodies were never found). The body count only grew throughout the county as the date of execution drew closer.

British journalists reporting the battles on scene could find themselves threatened by their own countrymen for accurately portraying what they saw, Rebel Kerry reminds us.

Hugh Martin of the Daily News had reported on previous Black and Tan attacks in the county and had been critical of their movements and had come to their attention for it.

“Is there a Hugh Martin among you?” one of them asked a crew of reporters who had arrived in Tralee to cover the latest developments. “If there is, we mean to do for him,” the Tans warned. “It’s him we want and it’s him we’re going to get.”

Martin had the sense to give a false name.  He added that he had come with the other reporters to learn about the burning of the county hall. One of the Tans directed him to a poster affixed to a nearby wall.

It read: “Take notice! Warning! Unless the two policemen in Sinn Fein custody are returned before 10 a.m. tomorrow morning, reprisal of a nature not yet heard of in Ireland will take place in Tralee and surroundings.”

The local inhabitants, expecting a massacre, fled. The next day Martin’s story was a global sensation. News of what was happening in Kerry made the front page of The New York Times and The Sydney Evening News. The siege of Tralee had begun.

Historians have often overlooked what happened in Kerry over the next 10 days, but in Rebel Kerry the authors remind us it was one of the county’s where the business end of the crown forces violence was most often seen. Read it and it will help you to grasp the real scale and violence of the struggle for Irish independence.