Lockdown love/hate in Sharon Horgan's "Together"

The power of Together, starring Sharon Horgan and James McAvoy, is in its giving a terrifying and global pandemic a human scale. 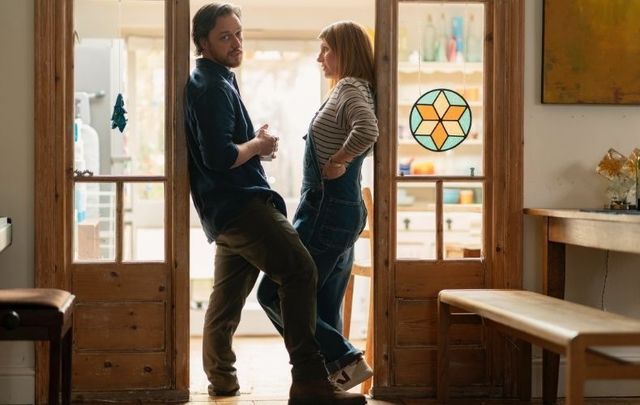 Academy Award nominee Stephen Daldry’s new dramatic comedy Together stars Sharon Horgan and James McAvoy in a story about a family finding a way to survive the pandemic.

Directed by Billy Elliott and The Hours helmer Stephen Daldry, Together features a tour de force acting job from leads Horgan and McAvoy, who make you believe in their brittle characters and in the hanging by a thread post-Brexit world that they inhabit.

Locking any two people into a house for months on end is going to result in drama, but when it's skilled actors working from a firecracker script by Dennis Kelly, the result is electric. Horgan has found a vehicle for her many talents (comedy, drama) and McAvoy excels as her tough-on-the-surface husband who's bravado is hiding a well of sorrow underneath.

The first thing that Together reminds us of is a line by the poet W.H. Auden who wrote, we must love one another or die. What choice do the two parties in this failing marriage have, when they can't go outside and can't bear to be inside together? Horgan, 51, and McAvoy, 42, are sensational in this deep dive into the unique strains that life during a lockdown places on their marriage and on the autistic child they are raising during it.

“Somehow they get through it, the lockdown, but I don't think that it happened to everybody,” Horgan tells IrishCentral. “I don't think everybody found their way through the pandemic by any stretch. But this couple did.”

“There is a sort of love at the end of it and there is hope and they find each other,” she continues. “And the pinnacle of the romance in this film is at the very end and you really feel it. But we were aware that for so many people it was the brutal opposite of that, where people were locked in a house with their abuser or the person that you want to escape from, and that escape wasn't always possible for people.

"I think our script was very breathable in other ways, it was full of hard knocks and humor and grief and stuff. And this is just one story, but the amount of people who didn't make it through, you know...”

Let's just get this out of the way, the couple in this story may live a comfortable middle-class existence – he's in computers, she's the head of a refugee charity organization – but they are far from content. In fact, there's a Who's Afraid Of Virginia Wolf blistering intensity between the pair that's by turns very funny and very sad.

As one of them remarks to the other at the film's midpoint, they hate each other so much that they seem to have progressed beyond it to some kind of strange new realm beyond mutual loathing. It's a realm that kind of echoes the lockdown. Once it's reached there appears to be no way forward and no way back.

“I think that if they spent the whole time just being vile to each other it would have been wearing for the audience,” says McAvoy. “But the fact is they are trying to understand themselves, even if they start off ridiculously self-centered and self-obsessed. We spend 90 minutes figuring out why they're such a mess and why they hate each other. The lockdown exposes them to their own emotional vulnerabilities and to becoming more comfortable with them.”

Horgan agrees with this take. “Your character sort of understands it before mine does,” she says to McAvoy. “My character's just very resistant to it, because sometimes relationships are very tricky, aren't they? You start by wanting everything from them and then you realize that that's never going to happen. And then you sort of settle. And then you have a midlife crisis where you go, why am I settling? And then turn the table upside down.”

“I think in a way she sort of felt trapped in this thing (relationship) that was filled with hate,” Horgan continues. “And then she became open to the fact that there was real history there and there was love. And sometimes you can find your way back to that, but she wasn't quite ready to see or hear that yet.”

Onscreen there are full-on knock-down fights. There are also quiet to camera revelations that break the fourth wall. Then there are outdoor sequences where their autistic son plays in his backyard in a spacesuit, unable to trust the world to interact with the neighbors' kid who we see in his own garden, also playing on his own.

It was this image that nailed the damage that lockdown does to the young, who are not as equipped for the seemingly endless isolation as many adults are. What will happen to this generation when they are finally free of this pestilence? Will they trust the world and life and each other? Will they be marked in ways we can't see or understand yet?

Some people are writing about life after the pandemic as though it has started already. But as Florida, Texas, Louisiana, Mississippi, and Alabama keep on reminding us, it has not started already.

In fact, it turns out that the worst thing you can do during a pandemic is to pretend that it isn't happening, followed closely by pretending that it's already over.

Pandemics really don't care how you feel about them, never mind what you think or who you voted for. These basic facts are addressed in the British context in the hard-hitting new film Together.

If you're like me, you may have to pause Together a few times as you're watching because it's so powerful you may need a minute to gather yourself. Horgan's character talks about what happened to her mother in a care home. How the British government failed tens of thousands of residents nationwide by failing to provide workers and residents with protective wear, and often by sending patients already sick with Covid-19 into their midst.

“Oh God, that speech,” Horgan says. “Dennis writes it as though it was breaking news. He chose to expose, in a very simple way, the terrible mistakes or choices that were made. And it was by far and away the hardest scene for me to do because there was an awful lot of facts and figures and numbers. And first of all, I couldn't really get my head around the human cost of it.

"And every statistic, every number is a human body, it's a person, it's somebody who existed and who isn't there anymore. And all the families that are affected by that, the loved ones, it suddenly became too emotional to do. It was very hard to get through. Luckily I kept forgetting my lines, so that sort of pulled me out of it. But yeah, it was a really remarkable piece of writing. And every time I did it, I sort of find something new in it to admire.”

McAvoy agrees that Together's power is in its giving a terrifying and global pandemic a human scale. “We have so much new these days. We have so much social media, but when you're watching Sharon do that speech you know her character needs to tell you this, that she's desperate to tell you this. And you're hit by it in a different way. And I think that's one of the things that drama can do. It can make you feel the power of weight and the gravity of something that we've heard a million times on the news. And that's this film.”

Together opens in cinemas on August 27.