The wonder of a revitalized Belfast city

Revisiting Northern Ireland's first city after 22 year away "I was astonished... I didn't know where I was." 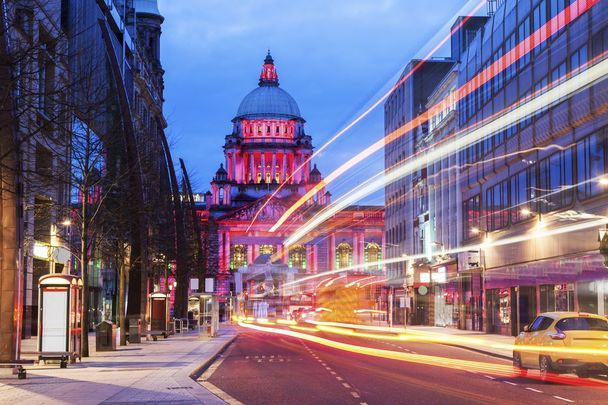 Belfast has come a long, long way from its troubled recent past, as Cahir  O’Doherty discovers after a 22 year absence

HOW much do you know about Belfast? Yes, it's the birthplace of the Titanic and Van Morrison, but is that it? Are you done?

For generations of people born in the Republic of Ireland and further afield the North's first city has always been a forbidding place, out of sight and mostly out of mind. Many saw no reason to go there, or even to think about it.

But Belfast has changed radically since the peace was won with the Good Friday Agreement in 1998. I know this because I returned for the first time in 22 years this week and I hardly knew the place.

When I left Belfast and Queens University in 1995 it was under a cloud, the peace process was still a work in progress.  Back then the city and the North looked fated to remain locked in an endless combat, retarding the development of this great city, making it a place to get into and out of fast, never a place to idle.

Returning after two decades this week I discovered that tourism operators there are not trying to pretend the Troubles never happened, they just want to assure you that that chapter is over and that there will be no going back.

As though to underline the changes that have come to this uniquely lively city, when I stayed at the opulent Malmaison Hotel, a boutique venue with 62 rooms and suites near the city center, I realized it was giving Brooklyn-chic a run for its money in terms of interior design and upscale food and beverage offerings. Where was I again?

With its proximity to the Victoria Square Shopping Center and the booming Cathedral Quarter (Belfast's main attractions are all divided into quarters) the Malmaison turned out to be the perfect introduction to the literally jaw dropping changes that have occurred in my long absence.

THE first thing that I noticed in the city was the leisurely crowds. Back in the 1990s they always kept their heads down and their eyes averted as they set off through the high streets near Belfast City Hall, getting the shopping done quickly and never stopping to take their time no matter what the weather was.

Back then there had been a famous ring of steel around the heart of the city, a reality and also a metaphor for the conflict it tried to contain.

But this week I saw something I never saw before in Belfast city center: leisure. People sat in the windows of open plan coffee shops casually looking at their iPhones or waiting for their friends.

Husbands and wives went to dinner in well-lit restaurants as the night fell. Young gay couples sauntered in and out of menswear shops stocking up on the latest fashions. School kids in uniforms milled about and flirted with each other.

People of all ages darted through the crowds on bicycles. Live music seemed to spill out of every bar I passed. Really good live music (this city is a haven of world class players).

I was astonished. In fact I was slack jawed with wonder. I didn't know where I was.  A recent £500 million renaissance in development had reaped unimagined dividends.

New hotels have popped up on every main street and even more are under construction (it's said there are 30 giant cranes at work along the city skyline right now, giving Manhattan a run for its money).

Belfast also has a terrific new racial diversity that it didn't have 22 years ago, with the consequential additions to its nightly dining options. Now the city has nightly Game of Thrones celebrity sightings at destination restaurants and at the Irish traditional music sessions (jazz too) in every major city center pub.

New Belfast has busloads of gawking foreign tourists and bespoke hipster pop-up cafe's (I saw man-buns tied with pencils all over town). It has a burgeoning new theatre scene, rock and roll festivals and world-class museums and that most sought after thing, unmistakable, round the clock buzz.

I arrived on November 8 for the Sound of Belfast 2017, a festival dedicated to local music that showcases new and emerging talent though ten days of concerts and conferences, culminating in the Oh Yeah Legend Award at the Mandela Hall at Queens University.

The Oh Yeah Music Center is located a former whiskey warehouse in the heart of the Cathedral Quarter, Belfast's buzzing cultural district.  The venue features a performance space, a drop-in area, office units and a privately run recording studio and exhibition space. It's a lifeline to the music industry that can direct emerging talent toward their destinies in other words, welcoming all communities and reflecting them too.

Music brings people together like no other art form, and you can see that the Oh Yeah Music Center is actually the mission statement of modern Belfast.  It gives cultural expression to everyone, welcomes everyone, gives a platform to everyone and on the days I visited it introduced me to talents like Roe, an 18-year-old singer/songwriter from Derry (real name Roisin Donald) who is an unmistakable pop superstar in the making. The sophistication of her songs and her pitch perfect delivery wowed the crowd and assured us we were in the presence of a new star.

Another brilliant way to connect to the pulsing heart of new Belfast is to take the genuinely unforgettable Belfast Traditional Music Trail (check out the five star reviews on Facebook and TripAdvisor).

Featuring two and a half hours of the most craic you will have this year or any, on the night we attended it was hosted by the gifted traditional uilleann pipes and whistles player Conor Lamb and guitar and the equally talented piano player Deirdre Galway (they are core members of the trad group Realta).

Deeply respectful of the history of traditional music, they are also mischievous young creatives in their own right who know how to make the Irish tradition come alive in the easily distracted world of Facebook and Snapchat.

They had hardened rockers tapping their toes and being astonished by the range and rhythms of the Irish tradition, making their first ardent converts after inviting them to try some Irish dancing. It was a night of ceol and craic to be remembered and I strongly recommend it to you.

AFTER the music it was time to repair for some delicious cocktails and tapas-like small plates at Babel at Bullitt, a rooftop bar and garden with panoramic views of the city. You'll feel like writer Michael Patrick King of Sex and the City took a Belfast detour when you see the place. It features mouth watering small plates that find the sweet spot between gourmet and gorging, and the cocktails are to die for.

I had a drink called a Tea Time Powers Punch that contained passion fruit, lemon juice, tea syrup and Powers Gold Label and it was without doubt one of the most delicious concoctions I've ever sampled (be warned, it packs quite a punch under that deceptively fruity hood). You'll arrive for nibbles but you may leave dancing.

Other delights of a Belfast trip include a mandatory visit to the gourmet St. George's Market. Here you can ask for a traditional Belfast Bap (the term originates from the tag line Bread at Affordable Prices) a breakfast sandwich filled with sausage and if you like, bacon, eggs and butter.

I wish I could convey to you its floury, sausagey, buttery perfection. It's pillow soft and utterly perfect small batch bread that turns the morning right side up and in my view is worth flying 6,000 miles for. If you are on a diet you can opt for other gourmet treats in an indoor market, but my advice is to break it for one of these.

Visitors always ask about the Titanic - and why not - they built the legendary liner and as they say here there was nothing wrong with it when it left Belfast Harbor.

A visit to the brilliantly curated Titanic Belfast and the surprisingly good restaurant attached is a must see when you visit, as is the tour of the old haunt of the city's most famous musical son Van Morrison. The Van Morrison Music Trail  will take you to the streets where he grew up (and that he took inspiration from). Along the way you'll hear that music, which seems to connect to the deepest roots of the Irish tradition.

Terri Hooley is the legendary impresario who was founder of the massively influential Good Vibrations record shop and former manager of The Undertones. Even his name is Irish shorthand for a good time, and that's what I promise you will have if you join him on his Alternative Walking Tour of Belfast, where he will explain how he got the appellation Godfather of Punk and what that moniker actually meant for Troubles-torn Belfast. When music was your only real source of solace, it became something grander than itself and Hooley remembers and embodies that tradition.

Another groundbreaking festival was occurring simultaneously with the music festival in Belfast, clearing space and acting as a marker of the enormous change sweeping this city. Outburst Queer Arts Festival is for my money one of the most important cultural initiatives in production in the city.

Now in its 11th year, it reflects on the challenges facing the North's sizable LGBT community and points to the opportunities that an all-inclusive vision represents, one that - like it's Belfast LGBTQ Pride parade (now the biggest in the UK outside London) - welcomes Planter and Gael, believer and unbeliever, gay and straight.

There were some mandatory detours that I took. One was to Fish City, an airy and bright fish and chip shop in the city center that really reinvents the concept, making a sit down meal a genuine pleasure thanks to its upscale design.

Located on Ann Street, the restaurant features fresh flaky cod in light as a feather batter served with mushy peas, bracing tartar sauce and a basket of utterly perfect chips - it's like all the great fry ups of your life in one sitting. Go. Now. Thank me later.

I'M still not over the surprises of my trip to Belfast. One was a knockout trip to Hadskis restaurant, where I was served one of the best steaks I've ever eaten (grass fed farm to table Irish dining is unmatched).

Offering Glenarm Shorthorn beef, which is dry-aged in Himalayan salt, their world class steaks won the Great Taste Award Supreme Champion and dual gold winner at the World Steak Challenge. Visiting these two establishments is an absolute must when you travel.

Meanwhile locals may not understand the great power and appeal of their traditional Irish cooking and baking yet, but in-the-know tourists realize the city is a hot spot for foodies and the message is finally traveling far and wide.

In Belfast the business community is confidently laying the groundwork for the future now, even as its politicians dither and squabble. The age-old American advice to follow the money suggests to me that peace, whilst never perfect, is now more enduring than anyone ever imagined.

Go and see it for yourself. Go and see what happens when the brighter angels triumph for a change. You'll have a ball (they know how to make you feel welcome) and you may come away with something like your faith in life restored. I know I just did.

And as Van Morrison sang, wouldn't it be great if it could be like this all the time?

This post is proudly produced in partnership with Tourism Ireland and Tourism Northern Ireland.