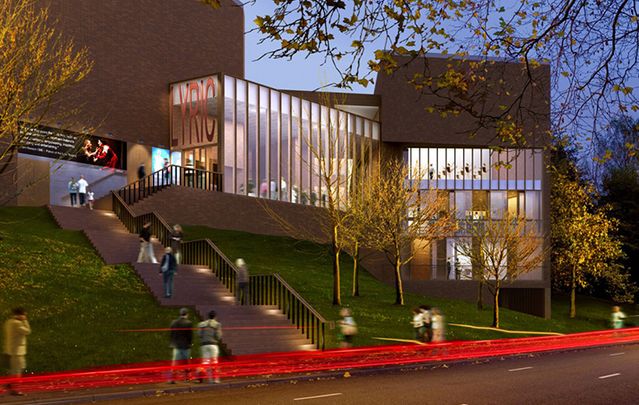 The Lyric Theater, in Belfast.

Belfast has changed. If you haven't been back to the city in at least a decade you'll be astonished by just how much it has.

Inward investment from the world's major tech and finance firms has transformed the skyline, but it’s the city's arts sector in particular that is enjoying a bona fide renaissance and making a name for itself on the world's stage.

That's the message that Sir Bruce Robinson, chairman of the city's world famous Lyric Theatre, came to New York to broadcast this week.

“Next year is the 50th anniversary of the Lyric in Belfast being located on its current site. So it's a very exciting anniversary for us. I'm here to meet our friends and supporters, including those who helped us raise money for the new building, to talk about the next stage of the development of the theater,” Robinson told the Irish Voice.

One of the ambitious new plans for the theater is to bring a new Lyric production to New York and the United States next year. Robinson is here doing some of the preliminary work to set that up.

“The creative drive in the theater is coming from the executive producer Jimmy Fay. He's been doing a fantastic job bringing fantastic productions to the venue. One of the most exciting projects he'll unveil next year is four new works by new writers,” Robinson revealed.

In recent years the Lyric has produced and then toured a number of highly successful co-productions, and next month Fire Below, a new play by Owen McCafferty (his play Quietly was a sensation at the Irish Repertory Theatre in New York in the summer) will take the main stage, in a co-production with the Abbey.

Previous McCafferty plays transferred to Dublin and London and the new one is expected to do likewise. Clearly touring is a new point of emphasis for the Lyric.

But the theater is also invested in the promotion of its actors. “In the last few months one of our actors, Lyric regular Anthony Boyle (best known for his turn in Harry Potter and the Cursed Child) is coming to New York with the production in the spring, so that conveyor belt of talent that goes right back to Liam Neeson,” says Robinson.

Hidden behind all the arts activity is another story: Belfast is becoming more culturally ambitious, finding its feet on the world's stage.

“That's very much part of the role of the Lyric. Of course Game of Thrones has been an outstanding success in showcasing the best of our arts production skills. A lot of the acting talent in the show has come through our doors and we were very much part and parcel of contributing to that,” Robinson notes.

With a surfeit of world-class writers on their doorstep, many of whom stand among the greatest of the twentieth century, the Lyric and Belfast have been sitting on a gold mine and they know it.

“Recently to promote the new Seamus Heaney Home Place museum Jimmy Fay produced a piece on Station Island, and that production will be taken to Monaghan to the Patrick Kavanagh Museum for performance (in a cross border gesture that would have delighted the Nobel Prize winning poet),” Robinson said.

Nowadays it’s common for audience members to travel from the Republic to Belfast to take in new Lyric productions, and the Lyric’s enthusiastic co-productions with their theaters return the favor.

“Our co-production of Conor McPherson's The Weir has garnered rave reviews and we have a lot of people coming from Dublin to see it,” Robinson said.

Theater is where people go to discuss the unspeakable and reconcile the unreconcilable, so the Lyric's importance to Belfast and Northern Ireland cannot ever be understated. Culture is often left to do the job that politics can't or won't, and by that yardstick the famous theater deserves to be seen and heard everywhere it can find a  stage.

To check out the Lyric's upcoming season visit lyrictheatre.co.uk.