Is there a need for a national debate about a new way forward for the Irish language? 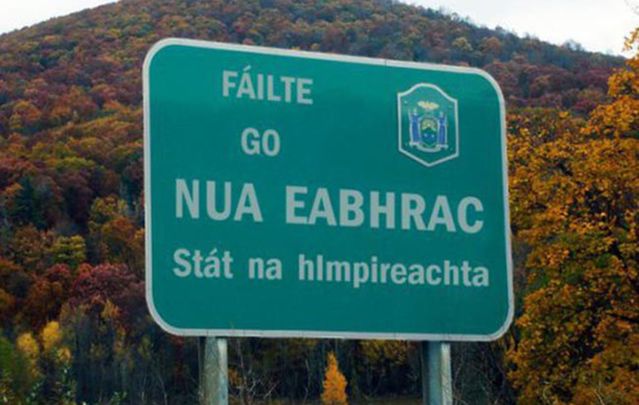 There is a need for a national and international debate about a new way forward for the Irish language.

After a one hundred year language revival effort it’s time to ask ourselves why we have we not made more progress creating fluent Irish language speakers in Ireland.

In fact, why do we still not have a nationally agreed goal for its revival?

It’s an emotive topic for many. Voters in Northern Ireland were galvanized recently when former First Minister Arlene Foster dismissed the prospect of an Irish Language Act. Her high-handed rejection drove thousands to the polls and reminded us of the special status Irish has in the life of the country, north and south.

These renewed debates about the language are happening in an era of profound transition for Ireland. The endless church scandals, the banking collapse and the austerity that followed, the national water charges protests, the marriage equality referendum, the centenary of 1916 and prospects for Irish unity after Brexit have all led to an unusually powerful and prolonged stocktaking moment.

“There are always debates about who we are and where we’re going,” Assistant Professor for Irish History and Culture at Drew University Caoimhin De Barra tells IrishCentral.

Last week the Irish Language Commissioner Ronan O Domhnaill announced the system of Language Schemes (which began in 2004 and were to provide services in Irish) has failed. Census figures published last week also show a small reduction in the number of Irish speakers in the country. Taken together they have created some anxiety.

“I certainly do believe in state support of the Irish language,” says De Barra, “but I think just throwing money at the problem is misguided. I’d be much more interested in a conversation about what we’re trying to achieve.”

“At the founding of the Gaelic League in 1893 they had two goals,” De Barra explains. “One was to preserve the Irish language as it existed in the Gaeltacht (the native Irish speaking enclaves still dotted through the country) and the second one was to promote the use of Irish across the whole country.”

But what does that actually mean? For a century the assumption has been that if people knew Irish they would speak it. For many there was a vague idea it would, through these efforts, eventually replace English.

That kind of “some day when the stars align” ambition doesn’t go away. Five years ago the Irish government released its two-decade strategy for the language. At the time they called for a quarter of a million daily speakers – but they failed to underline exactly how this would be accomplished.

“Language isn’t like owning a book or downloading an app,” says De Barra. “You can’t just turn it on at will. Language is like building muscle or lifting weights, if you don’t use it you lose it. Even people who have very good Irish have to find opportunities to use it on a regular basis. It’s a complex issue without easy answers, but there isn’t a clear guideline of what an actual revival would even involve.”

In the Irish language community in the broad sense there are two main divisions now – not in the sense that they’re competing with each other – but just in the sense of two different experiential approaches.

Read More: Why learn Irish? The Gaelic language students of North America give their answers

Some are interested in strengthening the Gaeltacht as the foundation upon which the Irish language will stand or fall. Then there are others who want to improve language teaching in the nation’s schools and promote its use outside the Gaeltacht. Those are actually very different ambitions, De Barra says.

“People who don't know what’s going on in the Irish language community lump them all in together, but there are different objectives within the revival movement,” De Barra continues.

Now living and teaching in New Jersey, De Barra is raising his own daughter through Irish, but he learned most of his Irish after high school he says. “How I learned is complicated, but I would not have had it not been for compulsory Irish in the schools. I went from a D in Pass in my Junior Cert to an A in Pass my Leaving Cert.”

What allowed to him to learn was his growing confidence in his Irish skills, he says. “I struggled at it. I thought I was stupid, I felt not good enough to understand it. It was only when I started to have some success in the language with a new teacher in my final two years in high school that I realized I could do it.”

There are many compulsory subjects in high school; the resentment commonly felt towards Irish can’t simply be explained by the fact that you’re forced to learn it. “My own research shows me that in the 19th century there were identical hostilities toward being compelled to learn it.” There is a disconnect between the language and its perceived utility. We are not doing a good enough job of conveying how deeply the Irish language can help us connect to our own history and culture. That question has to be addressed.

In a recent online survey Irish people were asked how many of them would like to speak Irish and 70 percent replied they wished they could. “I’ve noticed that anecdotally. If there’s a genuine desire there why are we not more successful turning that interest into action?”

“No one wants to say it was all my fault. But I don’t think it’s either of their faults, teacher or student. Our expectations for what compulsory Irish can actually achieve are totally out of proportion. An average 16-year-old in Ireland spends forty minutes in class and 20 on homework so about an hour a day on the subject.

“That adds up to 160 hours a year. That means for 2.5% of his/her time they’re interacting with Irish. And most of that is passively. Sitting in class. It’s not even an hour of full immersion in the language. 97.5% of the rest of the time he/she learns through the English language. We expect the school to come up with an equivalency when there’s no hope of that.”

Read More: The best ways to learn the Irish language for free

There are an estimated 20,000 native Irish speakers in the Gaeltacht now, but there are far more daily speakers of Irish outside these regions. “There’s considerable hope for the Irish language and I would certainly be more positive about its use.

“I’m working on a book on the topic of Irish language revival and how it could be achieved. One question that jumps out is. 'Where is the best place to speak it?' In the home, I have discovered. We have to find ways to incentivize Irish people to speak it at home.”

Trying to understand what can be done now to extend its constituency is the goal. “It’s not just throwing masses of resources. Let’s look at other places where language revivals have occurred.”

De Barra has studied the revival of Hebrew as an example. “People often dismiss that revival when it’s brought up. They say it doesn’t count.” He begs to differ.

“In Ireland we say, 'Hopefully the next generation will learn it' and then they’ll speak it at home. But with Hebrew the Israelis said the kids are learning this in the schools and we need to get as much of it from them as we can. One generation put its shoulder to the wheel.”

No one is saying let's abandon English, De Barra says. “You can have both. The focus of my forthcoming book will discuss how to get there.”

That Irish has endured and that we carry it with us is miraculous. But if we are to protect and preserve it now we need to recognize that the task can’t be handed off anymore, the time for a genuinely national strategy has arrived.