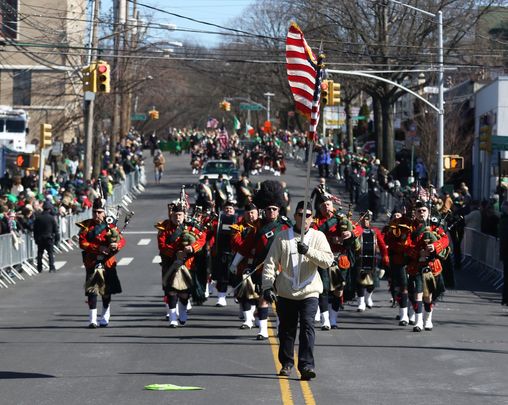 Organizers of the Staten Island St. Patrick’s Day parade continue to exclude gay groups from marching, the only Irish parade in city that continues to do so. The decision grows more baffling, and damaging, with each passing year.

Like those Japanese soldiers who hadn't heard that the war ended and kept on fighting in total isolation from the world and from time, the organizers of the Staten Island St. Patrick's Day parade, New York, look like men time forgot.

Already treated like a redheaded stepchild by New York City authorities, the parade committee is doing Staten Island no favors at all with this disastrous public relations campaign.

Don't believe me? Consider the message parade organizers are sending to the wider nation: They're apparently more Catholic than Cardinal Timothy Dolan (who said five years ago he has no problem with Irish LGBT groups marching in the parades). That they're more Catholic than the Ancient Order of Hibernians (who pointedly distanced themselves from the Staten Island parade over its exclusionary policies this week).

In effect, the parade committee is suggesting that they're even more Catholic than the Pope, who famously asked who was he to judge people who are gay?

So who keeps making this exclusionary decision and who still supports the exclusion? Step forward Larry Cummings, the tersely spoken parade organizer.

“Here’s the deal,” he told the press recently, “It’s a non-sexual identification parade and that’s that.  No, they are not marching. Don’t try to keep asking a million friggin’ questions, okay? The fact of the matter is that’s what it is, okay? And that’s that.”

This kind of absolutist thinking belongs more to the segregated South of the last century than to New York in 2020. Besides, it's not a private parade.  It uses city money paid to city workers, meaning police are assigned to it, public officials are invited to it, public funds are allocated to it and then the city sanitation cleans up.

Good luck finding one major New York City official who will attend the parade, under those circumstances, knowing they will have to justify the granting of your tax dollars to an exclusionary parade.

If the parade organizers are still willing to take the hits and become increasing social pariahs like this when the matter is settled everywhere else, is it because the people they exclude mean more to them than the people they're celebrating?

It ends up making a larger comment on the social and political temperature of America in 2020 -- you are being defined not by who you embrace but who you exclude.

Cummings has reportedly said that he would not welcome the Taoiseach Leo Varadkar to march in the Staten Island parade as an openly gay man under an Irish LGBT banner. So that's almost the full chessboard, then. Who will be left?

I should say that I have no personal beef with any of the parade organizers or participants.  I don't know them.

What I care about is that this ongoing ban is sending a toxic message to every young Irish American closeted teenager on Staten Island who is struggling with their identity, thinking that they are not fit to be seen, heard or participate in their own Irish community.

It is saying, year after year, there is something uniquely shameful about them that is not worth welcoming, today or ever.

The irony is that by their refusal to offer an Irish welcome (the first duty of a St. Patrick's Day parade), the parade organizers are slowly learning a little about what it feels like to become a disfavored group.  Their not an inch refusal is making their parade an increasingly lonely affair.

By creating cruel exclusion they are slowly starting to feel the sting of it themselves. It makes no sense.

This week City Council Member Steven Matteo, the Council’s Republican minority leader, announced he would not march in Sunday’s parade, joining almost all other civic leaders boycotting the parade over the refusal to allow Irish LGBT groups to participate. Matteo has joined Staten Island Borough President Jimmy Oddo, a fellow Republican, who boycotted the parade for the first time last year.

Painting themselves into a corner like this, the parade organizers have done likewise for Staten Island. The wider community itself will simply have to decide if it will be represented by a kindly Irish Cead Mile Failte or by a kind of latter-day George Wallace. I know which one I'd pick.