"Putin's biggest GOP admirers like Trump and his Congressional acolytes – the real face of the Republican Party in 2022 – are doubling down on their support." 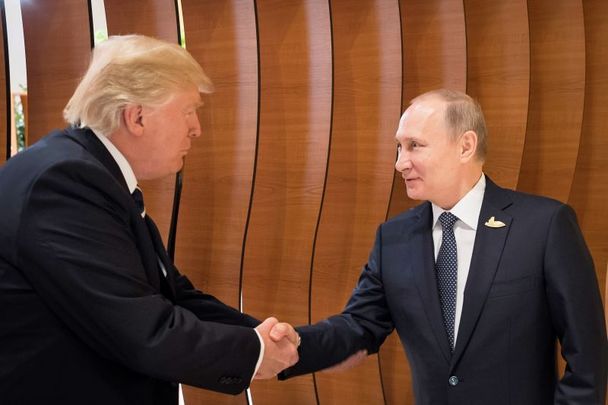 July 7, 2017: In this photo provided by the German Government Press Office (BPA) Donald Trump, President of the USA, meets Vladimir Putin, President of Russia, at the opening of the G20 summit in Hamburg, Germany. Getty Images

Recall how often Donald Trump has expressed his admiration for the five foot six fascist, going so far as to call Putin's murderous plan both “genius” and “savvy,” even as the extraordinary death toll was apparent.

But Trump is far from alone in the GOP with his fan-boy enthusiasm for the authoritarian “strong man.” Rather than show a unified front against Putin's aggression, Madison Cawthorn - the far-right Republican Congressman from North Carolina -  took the opportunity to call besieged Ukrainian President Volodymyr Zelenskyy an evil thug instead.

“And to top it all off, NATO has been supplying the Neo-Nazis in Ukraine with powerful weapons and extensive training on how to use them,” Greene recently tweeted. This claim means there isn't a shade of difference between her bluntly anti-Ukrainian statements and Putin's, to give you an idea of just how far to the right so many GOP members have now wandered.

Rep. Marjorie Taylor Greene (R-GA) blames Ukraine for being invaded: "You see Ukraine just kept poking the bear, poking the bear, which is Russia, and Russia invaded. And the hard truth is ... there is no win for Ukraine here. Russia is being very successful in their invasion." pic.twitter.com/RVHeMzSJ2F

Meanwhile Steve Bannon, Trump's Irish American former campaign manager, recently bizarrely claimed that “Ukraine’s not even a country... it’s just a corrupt area where the Clintons have turned into a colony where you could steal money out of.”

Then Trump’s former National Security Adviser Michael Flynn insisted Ukraine’s independence as a nation is “not vital to the United States,” as if the death or displacement of over ten million people in Europe is a thing we should not really concern ourselves with.

Meanwhile, apparently supportive clips from Fox News have been played on a loop to Russian audiences as justification for Putin's horrific invasion, touching on conspiracy theories and propaganda that some say have their origin in Moscow, leading many to question which side is Fox on, as slaughter on a scale not seen in Europe since World War II continues.

Tucker Carlson says he's rooting for Russia. Why shouldn't we believe him? pic.twitter.com/JeQwvkI4ec

Until recently, it had all been going so well for Putin. He had successfully embraced the leading right-wing anti-European Union populists like Britain's Nigel Farage, France's Marine Le Pen, Italy's Matteo Salvini, the Netherland's Geert Wilders, and Hungary's Prime Minister Viktor Orban – finding common cause in the issues that unite them, including hostility to immigrants, feminists, LGBT people, refugees, the media, academia, the left and anyone who stood in their way.

Each of these far-right figures is a longstanding EU and NATO critic, and Putin calculated that they would not stand in the way of his ultimate aim, which is to restore the Iron Curtain all the way back to East Germany.

Whilst these former friends and supporters now sprint for the emergency exits, here in the US, Putin's biggest GOP admirers like Trump and his Congressional acolytes – the real face of the Republican Party in 2022 – are doubling down on their support. 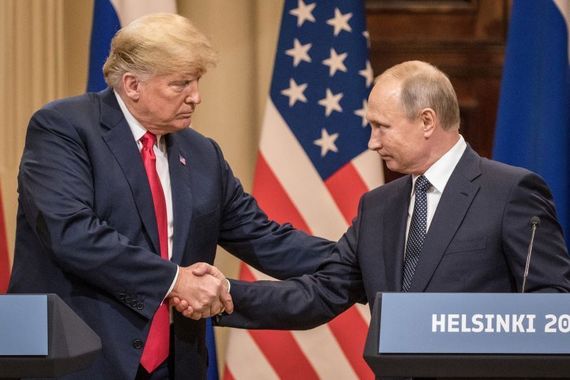 July 16, 2018: US President Donald Trump and Russian President Vladimir Putin shake hands during a joint press conference after their summit in Helsinki, Finland. The two leaders met one-on-one and discussed a range of issues including the 2016 U.S Election collusion. (Getty Images)

So what really worries the top brass of the GOP is that the public will connect the violence they see in Ukraine to the violence of the January 6 insurrection, where a homegrown authoritarian leader set his supporters on a collision course with American democracy after months of relentlessly repeated lies and propaganda.

Recall that Trump was first impeached for withholding arms from Ukraine’s President Zelenskyy, in a domestic political shakedown that showed Putin that Trump and the United States were uninterested in defending the nation from his expansionist aims in Europe.

But is seeing the violence that inevitably arises from authoritarianism in another part of the world an inspiration to resist its growth here? Trumpism led to a violent attack on the Capitol and an attempt to steal the election. Do we really want to see what kind of horrors a second trump term might unleash on America in a second term, now that we have just had a very timely reminder of what happens when a cruel man with infinite ambition and no conscience grabs the levers of power?