One Irish author thinks centuries of historical scholarship and eyewitness accounts conspired to mislead us about Cromwell. 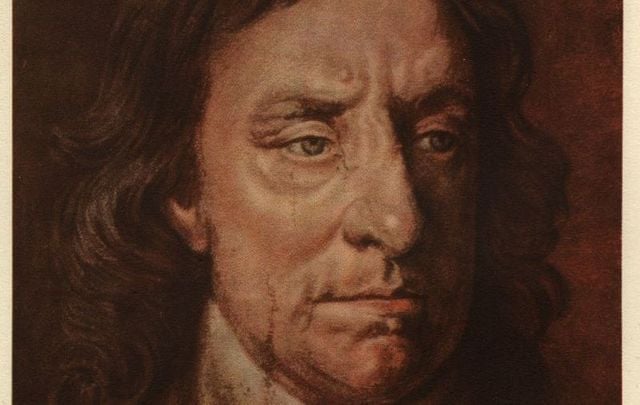 Have centuries of historical scholarship and eyewitness accounts conspired to mislead us about Cromwell? Getty Images

On August 13, 1649, Oliver Cromwell set sail for Ireland to launch his notoriously brutal conquest of Ireland, persecuting Catholics and taking most of their land, but is he unfairly remembered?

Only one man knows the real truth.

Reilly grew up in the shadow of the walls Cromwell’s New Model Army once famously attacked, and he has come to a novel conclusion about the despised English leader that is certain to provoke his neighbors – we owe Cromwell an apology.

“I feel he was much maligned and I think we should apologize to him posthumously and to his family for accusing him of war crimes,” Reilly tells the Irish Voice, IrishCentral's sister publication.

“We blamed him for killing the ordinary men, women, and children of Ireland. But only two individuals from 1649 and for the next 11 years make that allegation, and those two are unreliable. It didn’t happen.”

By making this explosive claim Reilly is letting Cromwell off the hook for the massacre in Drogheda in a way that no historian ever has before. 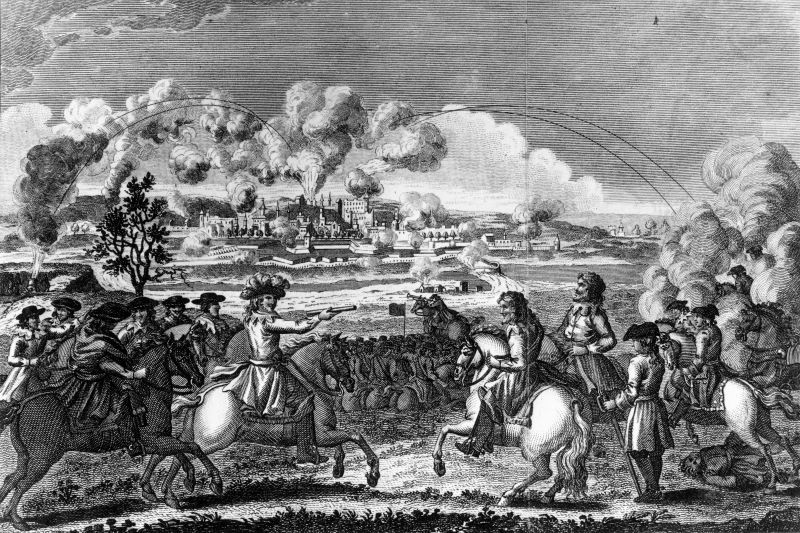 “My book is a challenge. I’m an amateur, this is what I’ve found,” Reilly says.

“If any historian can prove what they’re teaching Irish children today in the history books is wrong then go and prove it. I believe that Cromwell is innocent of war crimes. He’s not guilty.”

Most historians agree that at the siege of Drogheda in September 1649, Cromwell’s troops killed nearly 3,500 people after the town’s capture – comprising around 2,700 Royalist soldiers and all the men in the town reportedly carrying arms, including some civilians, prisoners, and Catholic priests.

Cromwell himself, ardently believing he was doing God’s work, wrote of the carnage afterward that: “I am persuaded that this is a righteous judgment of God upon these barbarous wretches…”

In his first letter back to the Council of State Cromwell also wrote: “I believe we put to the sword the whole number of the defendants. I do not think 30 of the whole number escaped with their lives.”

There you have it from the horse’s mouth. Not 30 people in the entire town escaped the bloodshed.

“Those who promote the view of Cromwell as a war criminal perpetuate the idea that he simply lost his moral compass in Ireland and returned to his old self on his return to England. This is an inaccurate portrayal.”

Reilly admits he’s an unlikely champion of the Puritan parliamentarian. For a start, he failed history at school.

“That’s a significant point. I was never interested in history when I was in school. But I became curious to know why Cromwell killed all my ancestors. That was what I was I was taught,” he says.

To research his explosive claims Reilly went to the local municipal records and also checked out the Drogheda corporation records. There he realized that there were hundreds of names of people who were very much alive before the siege and after it.

So if the entire population wasn’t killed how true was any of it, he asked himself.

“I read voraciously. Mostly English biographies in the first instance, 19th and 20toh century work. I began to realize the English had a completely different attitude to him. He was actually voted for in the top 10 Britons in history.”

Well, they would say that though, wouldn’t they? From their perspective, standing in their shoes, Cromwell had dispatched a tyrannical king. He was the first Republican and an advocate for democracy.

“There was a huge contradiction between the Cromwell that they wrote about, not just in his military and political achievements, but also the man – with the Irish telling. That’s what made me look into it.”

Thomas Woods, an eyewitness of the Drogheda siege, should not be believed, says Reilly. 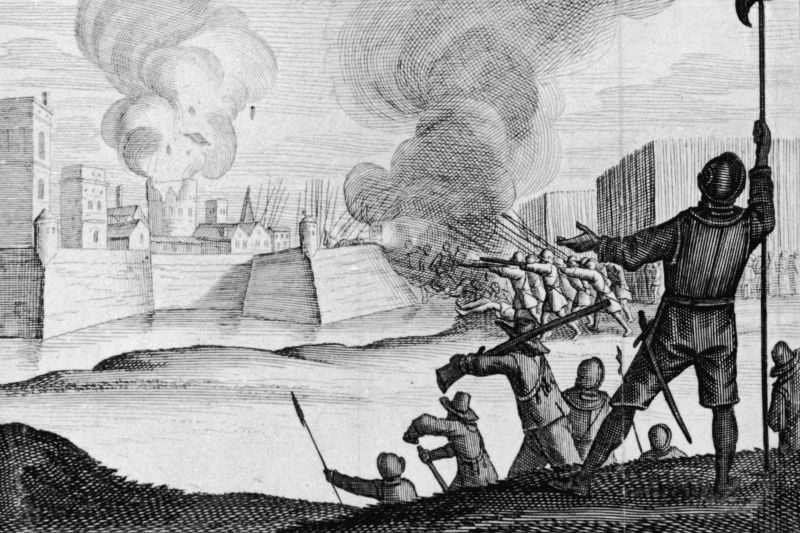 An artist's rendition of the storming of Drogheda (Getty Images)

“His account could have been interfered with by a lot of people. We can go back to Cromwell’s own account from 1649, but we can’t do that with Woods because it’s written so long after the fact,” Reilly says.

“A lot of people sit on the fence about him. I absolutely believe that on the date in question most of the population were not even in the town.”

Where would they have gone? It would be no small undertaking even today for the population of Drogheda to up sticks.

The entire population retreated to a monastery?

“Yes, most of them. Outside the walls. The policy was when a town was being besieged, they would fill the town with soldiers, ensure there were victuals for a certain amount of time, and get all the superfluous people out so they didn’t take up the food.”

There’s further evidence, Reilly says. The Duke of Ormond, Cromwell’s adversary, is documented as saying he had ordered the population out of the town. The dean of St. Peter’s Church also documented that his children and wife were sent out of the town.

There isn’t more documentary evidence from the people of the town because unfortunately not enough of them wrote.

“My feeling is that most of the people of the town were gone,” says Reilly. But he can’t prove it.

“No, not from this distance and very few people can. But if they were in the town or they weren’t in the town it’s immaterial.”

If they were in the town they’d have been more likely to be put to the sword, wouldn’t they?

“No. Absolutely not. Cromwell’s orders were very, very clear. He told every man in his army not to do any violence to anyone unless they actually bore arms.”

But isn’t that the kind of thing canny military leaders say before they pound a place into the ground? Trust us. Imperial powers often lose their moral compass in the heat of warfare.

Look at Abu Ghraib. Look at Bloody Sunday. Does Reilly believe that happened to Cromwell, who thought he was on a mission from God?

“No. You really have to look at the evidence. The evidence is really insubstantial. There were lots of English commanders who came to Ireland and lost the run of themselves. Cromwell was not one of them. He’s been labeled the greatest ogre in Irish history. It’s not true.”

How do the locals in Drogheda respond to his findings?

“They don’t like it. There’s a local historical society, and when they heard about my latest book I felt like a pariah. But they don’t let the facts get in the way of a good story.”

Reilly says it astonishes him how people with political inclinations can make it color their view of history.

“I could take Sinn Fein councilors back in a time machine and show them what happened in the siege of Drogheda and they’re still not going to believe it. That’s what’s wrong with the country.” 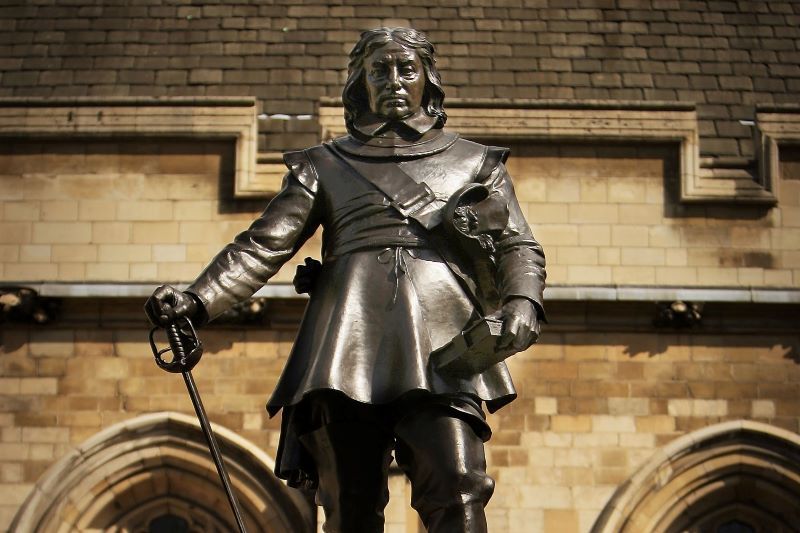 A statue of Oliver Cromwell outside British Parliament (Getty Images)

Does Reilly have his own pieties?

“No, I’m an atheist, I’m apolitical, I’m sailing through life and hopefully I’m going to make some kind of impact on it.”

Reilly has written that in Ireland “Cromwell unequivocally blames the Catholic clergy for the 1,641 massacres of innocent Protestant settlers and outlines his revulsion of such behavior in no uncertain terms in the above-mentioned declaration.”

The phrase “innocent Protestant settlers” catches the eye, because in fact, they were colonists who had purloined the land from the native Irish. How innocent could those settlers be really?

“That’s true, I get that. The problem with this date is that we cannot judge the political, religious and economic world of the 17th century. It may as well have happened on another planet,” Reilly says.

“Cromwell categorically blames the Catholic Church for the 1641 Rising. You can see why he had the high moral ground.”

Had Cromwell the high moral ground?

“You think about the Inquisition. Think about the Cathars in France. Looks at the nepotism. Look at the indulgences they sold, all of the terrible things the Catholic Church did throughout Europe,” Reilly argues.

“All Cromwell has on his side is God. He’s coming into a time when the Catholic Church is a cesspit of depravity and he believes that they rose up and murdered Protestant settlers who bought their land within the law.”

What’s his response to the Great Hunger? Will that be exposed in his next book?

“No. I’m not a maverick or a contrarian in any shape or form. I believe I have found something that historians have missed.”

Meanwhile, Reilly has no doubt about the history we have been taught.

“It’s propaganda we were taught by de Valera’s Ireland. It’s an accelerant that damaged Anglo Irish relations over the years, it’s bloody inflammatory. This stops now.”

What do you reckon: an apology for Cromwell or no apology? Let us know your thoughts in the comments section, below.

No one compares to Sinéad O'Connor, new Showtime doc proves