Do protesting NFL players need to bring some tiki torches to their next games to get Donald Trump's respect? 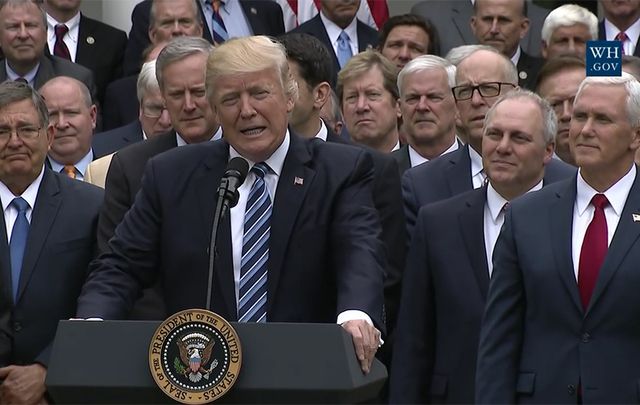 America has become a place where, every three months or so now, a bunch of rich, white Republican senators try to strip 30 million people of their health care. It's appalling.

To combat them, millions of voters have no choice but to phone their offices or take to the streets in protest, month after month, because these attacks are relentless.

Imagine the terror felt by just one insured patient with a pre-existing condition under these endless attacks, never mind 30 million. Imagine the dread someone suffering from an ailment as common as diabetes experiences that their coverage could be lost if Republican senators eventually succeed in repealing Obamacare.

For millions Obamacare, which prevents insurance companies from rejecting patients with pre-existing conditions, is quite literally a matter of life and death. Each time Republicans threaten to repeal it they feel as if faraway politicians are playing roulette with their lives.

The #GrahamCassidy bill is dead!

The sheer cruelty of it is staggering.  In a country this rich, citizens with chronic or life threatening health conditions shouldn't have to worry about whether or not they can afford to be treated by health professionals.

They shouldn't have to turn to Go Fund Me pages or local community fundraisers to avail of the minimum of care.

So why do we allow Republican leaders to threaten them all, month after month, with utterly bogus repeal and replace bills when the truth is these vulnerable patients are already fighting formidable battles just to exist?

Meanwhile, the Trump administration has learned that if you can't stop public protests, you can at least try to contain them. So last week we watched the president wrap himself up in the American flag in a truly shocking speech. Trump suggested NFL “owners” should fire any player that protests systemic racism in America by kneeling during the National Anthem.

“Wouldn't you love to see one of these NFL owners, when somebody disrespects our flag, to say, ‘Get that son of a bitch off the field right now,’” Trump said at a jeering rally in Alabama on Friday.

"You're not supposed to kneel before the American flag."

🗣🗣 I guess we missed your stupid little meeting. pic.twitter.com/LvYzfm7gKf

But the American flag belongs to every citizen, not just Republicans or Trump, and as civil rights icon John Lewis reminded us this week, there is nothing wrong with kneeling down to stand up against injustice. It’s protected by the Constitution.

The time for Trump's intemperate language was when he was confronted by burning tiki torches and the white supremacists and neo-Nazis in Charlottesville who were holding them up. But Trump didn't call these racists “sons of bitches,” even after one of their number killed someone with a car.

Instead he claimed that there were “very fine people” among them. So that's free speech for white supremacists but not for silently protesting NFL players. Got it.

What this means is that Trump's objection to predominantly African American NFL players kneeling clearly isn't about the flag or the National Anthem.  It's about who has the right to express themselves, who has the right to protest, and who should be silenced, intimidated and fired.

The more you think about it, the more Trump's silence over the tiki torch hordes contrasts dramatically with his full throated condemnation of black NFL players.

Where was his great passion for American tradition then? Why would he quickly attack the NFL protesters on Twitter but stay so silent for so long over Charlottesville?

The more vulnerable you are financially, racially and socially these days, the more the modern Republican Party appears to be on an unstoppable mission to strip you of your rights, your voice, and – thanks to these relentless attacks on Obamacare – even of your life, it sometimes seems.

It's bad enough the Trump administration wants to strip 30 million of their health insurance, which they are pursuing with a religious zeal, but they have now made it clear they want to silence all protestors too, removing their right to protest longstanding systemic injustice though their bullying and shaming tactics, in a blatant attempt to claim the moral high ground for themselves alone.

Perhaps those silently protesting NFL players need to bring some tiki torches to their next games to get Trump's respect.