Ireland's award-winning Cartoon Saloon is back with the gorgeous, psychedelic new Netflix feature "My Father's Dragon" which has been five years in the making. 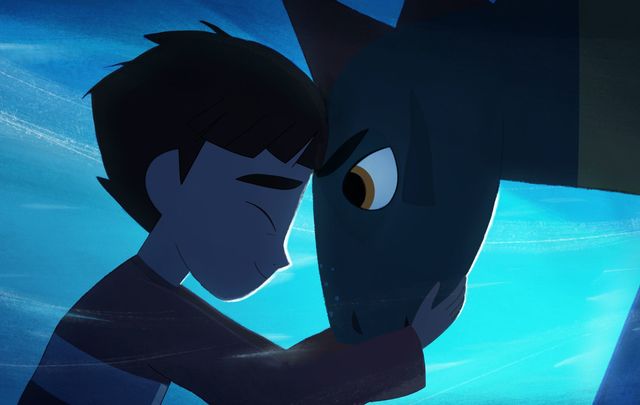 "My Father's Dragon" from Cartoon Saloon is now streaming on Netflix. Netflix

"My Father's Dragon," based on the 1948 best-selling children's book by Ruth Stiles Gannett, is aimed at younger viewers but it's so beautifully composed by the five times Oscar-nominated Irish studio that adults won't be able to resist it.

The story is simple. After financial hardship forces young Elmer and his mother to move away from their country home to the Nevergreen City, he becomes so unhappy that one day he simply runs away.

Sitting on a dock near the river he discovers a talking cat who sends him on a quest to Wild Island, where a young dragon is waiting to be rescued. If Elmer brings him back to the Nevergreen City, the talking cat explains, the money he makes from showing him off will solve all his mother's money problems for good.

My Father's Dragon comes to Netflix

You'll be helpless to resist as these little kids try to make sense of the scary big adult world tale unfolds. The point of "My Father's Dragon" is to remind you not to panic, because panic makes bad stuff happen, and it can make you mean, the film reminds us.

The one-hour thirty-nine-minute film that follows is mostly an understated triumph for Cartoon Saloon. Although the material is slight, it is very approachable, but the trade-off is that swaps out big emotions and experiences for the more manageable fare we see so much of nowadays (including the now de rigueur breaking wind jokes).

Having wowed the world with jaw-droppers like "The Secret of Kells" and "Wolfwalkers," the County Kilkenny studio founded by Paul Young, Tomm Moore, and Nora Twomey is making its mark as a kind of Irish Studio Ghibli, with its own Irish-influenced aesthetic and preoccupations.

Beginning in 2017 with a crew of over 200 artists and technicians working in production and project development, Cartoon Saloon has painstakingly crafted this story of how kids can rescue each other through the gift of friendship.

The real monsters in this story are a parent's financial hardships and the uncertainty that comes with them, as well as the dawning realization that your parents are always in control of everything that happens.

In scene after scene, you will remember what makes this Irish studio so unique. There's an emotional directness that steers away from the self-satisfied antics of the characters in the bigger studios, which is hugely welcome.

My Father's Dragon comes to Netflix

There is a tonal and visual palette that makes you want to stop the frame and just be dazzled by the beauty. Seriously, one god's eye view of Nevergreen City in the rain was so beautiful that it practically sang, for example. It's impossible to think of any major American animation studio that's doing similar things that catch the heart at this time.

There's a fever dream quality to the plot and scenarios that unfold that borders at times on an acid trip – stoners may adopt this film as one of their own, I suspect.

But that's true of children trying to navigate the bizarre rules and complexities of the world created by adults, whose main purpose seems to be to steal your joy. "My Father's Dragon" succeeds by keeping its eye on the prize, helping two kids - Elmer and his friend Boris the dragon - find their feet through friendship and mutual support.

You'll be hard-pressed to resist the ending, which is glorious, or the friends for life love that is the beating heart of this modest but moving film. Already a winner of the Special Jury Prize at Animation Is Filmawards this year, that honor has bolstered its potential next Oscar nomination for Best Animated Feature.

Regardless of how it fares during awards season, there's no doubt that this studio's rise is as impressive as it is unstoppable now, and that's all to the good because the results are so gorgeous.

'My Father's Dragon' will play on Netflix from Friday 11.