"Apparently, it takes an armed invasion of the Capitol Building to bring the nation's most prominent political reporters briefly back to their senses, but the effect doesn't last long." 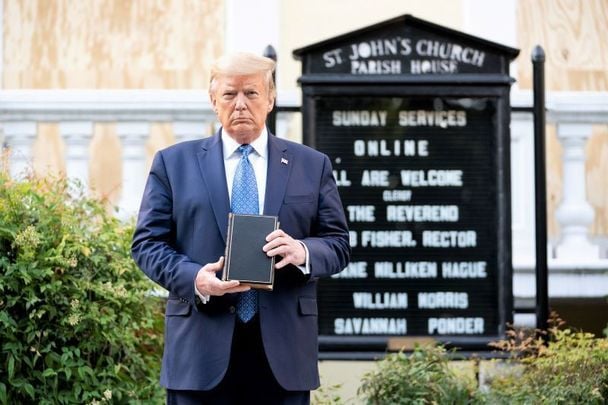 Mistakes are human, it's time we admitted the US press made a near-fatal one about Donald Trump.

The hardest thing to do after making a terrible, life-changing mistake is often to admit that you actually have done so. It's a dilemma as old as the Bible.

St. Paul spent the first part of his life persecuting Christians until God blinded him on the road to Damascus, ironically allowing him to finally see what he had refused to beforehand.

It turned out there only was one true God, and He was pretty upset about how Paul had been treating his chosen people.

But whether you believe in the stories of the Bible or not yourself, the point is pretty clear: it can take something as dramatic as divine intervention before an otherwise obstinate man will confront his own errors.

Think of how many times the people in your own life – the ones you grew up with, the ones you know through work and marriage - have told you without prompting that they had simply got it wrong? Can you count these times on one hand?

If the wisest people know they are often wrong, the dumbest rarely doubt themselves, to them it's always everyone else who is laughably in error.

The fastest way to understand that you are among idiots is to notice if they are willing to admit to their mistakes or not. If not, congratulations, you have embraced the society of the stupid. It's up to you to grasp the implications of your choice.

On Sunday, January 16, in an article in The New York Times about the defeated president Donald Trump's latest moves, the columnist Maggie Haberman referred to what she called “the former president’s false claims about fraud in the 2020 election.”

That means that she still, even now, after years of proof and a deadly insurrection, can not bring herself to write “the former president's -lies- about fraud in the 2020 election.”

Using the adjacent words like “false claims” instead of the exact words like “lies” may seem like a quibble over semantics until you remember how Trump takes a chisel to the tiny gap between those words and agreed reality and taps away at them until they become a canyon.

Of course, Haberman's brand of genteel reticence was briefly abandoned in the days immediately after the insurrection when The New York Times finally called a spade a spade and ran the headline: "Trump Incites Mob – Rampage In the Capitol Forces Evacuations;  It's 'Part Of His Legacy,' A Republican Says."

Apparently, it takes an armed invasion of the Capitol Building to bring the nation's most prominent political reporters briefly back to their senses, but the effect doesn't last long.

Before you can say “partisan sniping,” they fall back into their old habit of both-siding the unmistakable emergence of a lie so big it bends reality, an authoritarian that threatens democracy and an insurrection that threatens the republic and their own reporting.

Reporters should know this, and the smartest ones like Haberman do know it, but they value traditions like insider access and ivy league gentility over the unmistakable danger of encroaching fascism.

Seeing how close Trump led us toward a successful coup has not modified their language or their awareness of their own mistakes. So here are the facts. On January 6, 2020, our democracy was placed in peril. The wheels came right off the American experiment in ways that have yet to be addressed and righted. A power play much closer to Putin's Russia or Orban's Hungary unfolded in the hallowed halls of the nation's capitol.

The same political reporters who once said that Trump wouldn’t run, then wouldn't win the GOP nomination, then wouldn't try to overturn the last election are now telling that we have nothing to worry about with the next one.

The national media still haven't learned from their own repeated mistakes and they have no appetite to admit them, so it's time we told them.