Why living in the US can make the Irish detest St. Patrick's Day 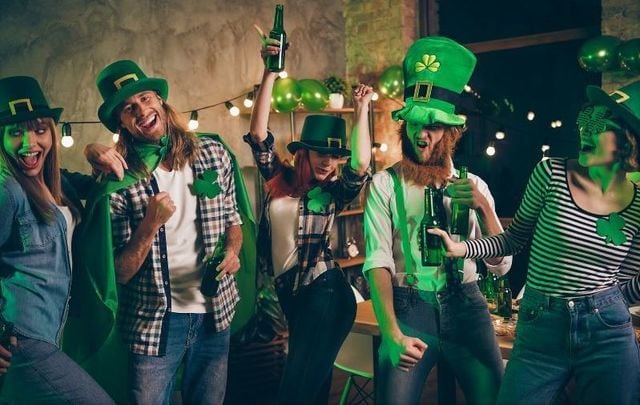 What do you make of the anti-Irish products that pop up around St. Patrick's Day? Getty

Babies drinking, sex acts and abusing drugs T-shirts are appearing in American stores this year, marking a big change for the "Kiss Me I'm Irish" staple.

One T-shirt appears to invite grabbing – á la Donald Trump – while another calls for a crude sexual act to be performed by a woman. A third urges drug use on St Patrick’s Day. A fourth portrays a drunken baby, of all things, with a tagline “be the talk of the party.”

Mall shops begin to fill up with seasonal merchandise celebrating the approaching St. Patrick’s Day at this time of year.

Amazon, Target, Cafepress, and other well-known companies seem only too happy to use crude sexual innuendo and offensive language in their efforts to win buyers.

Most Irish people decide to just grin and bear it, as T-shirts bearing the legend “Irish I Was Drunk,” and other similarly insensitive banners, start to appear in shop windows.

Half Irish, half drunk.

But in recent years the level of pointed cultural insensitivity has really amped up in some outlets, causing mortal offense instead of mild discomfort.

Spencers has in recent years been a major offender, as has Urban Outfitters, but this year their “St. Patrick’s Day” material – never mind offensive material – is thin on the ground, period.

Perhaps the nation finally got the message?

Or perhaps not. It seems other companies have been happy to pick up the anti-Irish gauntlet, printing hundreds of stereotype-heavy T-shirts guaranteed to get Irish eyes seeing red.

RedBubble is a particularly enthusiastic offender this season, offering no fewer than 4,000 t-shirts when you type “Irish Drunk” into their search engine. That’s making Spencers and Urban Outfitters look like Johnny Come Lately’s in the anti-Irish stakes.

Amazon is no slouch in the “Drunk Irish” T-shirt category either with more than 1,000 offerings on a "Drunk Irish" search. Even craft-centric Etsy offers several pages of Drunk Irish themed St. Patrick’s T-shirts of their own.

Read more: Genuinely awesome St. Patrick’s Day t-shirts that make up for all the crap

Beer me you Irish bastard.

These things have a bewilderingly large market share, and it leads to the question of who is buying them? Can the buyers all be Irish? Or is it possible that anti-Irish stereotypes are much more profitable than the heritage they exploit?

Alarmingly, some outlets are moving on from cultural insensitivity to rape culture now. Making light of Donald Trump’s horrendous admission of sexual assault Spencer’s came under fire last year for selling a T-shirt that bluntly referenced it.

“In case anyone still needed a reason to never walk into a Spencer’s again, this is proudly being displayed in the front of their PDX store,” writer Mary Numair writes. “Way to normalize sexual assault.”

In case anyone still needed a reason to never walk into a @Spencers again, this is proudly being displayed in the front of their PDX store. pic.twitter.com/jalMio7i9P

This week OregonLive reached Spencer's vice president and general counsel Kevin Mahoney in New Jersey, where the company is headquartered, to ask him about the “Grab Them” product.

"The shirt was never meant to promote any type of abuse or attack on any person," Mahoney said, adding that it was "satire" similar to Alec Baldwin's portrayal of President Trump on "Saturday Night Live."

The difference is that Baldwin makes people laugh. Spencers T-shirt has led to national outrage.

Meanwhile, it seems that T-shirts are becoming the go-to place for cultural stereotyping because what’s expressed on them can be as aggressive and belittling as the stuff you see on some suburban walls.

What do you think of these anti-Irish T-Shirts and products in the lead up to St. Patrick's Day? Share in the comments